Breaking through a brick wall.  That’s what at times it must feel like for ArenaNet when marketing Guild Wars 2.  Outside the relative comfort of fan forums such as Guild Wars 2 Guru, there appears to be a direct lack of understanding or opposition to the fundamental changes they are making to the genre.  Embracing the changes of adaptive class types and self sufficiency, coupled with the direct removal of a dedicated healer is a revelation to those of us who have grown tired of the predictable.  For many though and what could potentially amount to a large proportion of the MMOG market, there still remains a wariness to the changes that ArenaNet are proposing…

Lurking on various other forums, it is still apparent that there are swathes of individuals who not only dislike the prospect of classes with greater flexibility but also those who wish to retain the holy trinity (that of Tank/Healer/DPS).  While all are entitled to their opinions, this regressive approach to classes has not only held the genre back for years but has created a stagnant image on a genre that holds so much potential.  What many are seemingly finding difficult to comprehend is the lack of structured combat as a result of no dedicated tank and for all or many classes to be “overpowered” as a result of being able to heal, resurrect and deal damage.

Those of us who have been pining for a greater level of customisation to our characters for years and who for the most part play hybrid classes as a result of classes lacking the flexibility we crave, there needs to be a realisation by communities outside of ArenaNet’s bosom, that for progress to be made shackling ourselves to methods of old will only serve to further tarnish the dwindling reputation of a genre that has become old before its time.

I believe the problem partially stems from a mentality of “if it isn’t broke, don’t fix it.” but also that people are naturally resistance to change.  Since the inception of MMOGs, the nature of strict class types has been established as the foundations upon which to build, however, as the genre has progressed over the years those original definitive class lines have begun to blur as developers pushed the boundaries of class mechanics.  Fundamentally, these class lines began to blur because developers realised the restrictive nature of classes they were producing and putting upon the player base.  But many through fear of retaliation or rejection of their product have never quite stepped far enough to forge their own path. ArenaNet have made that leap and should surely be rewarded.

Where class mechanics restrict a users play style, it further restricts in the production of game content.  By disposing of the holy trinity, developers immediately free themselves from constraints that have been in force for too long.  No longer does every boss encounter have to factor in aggro-management or the quantity of healers required, but can instead focus on the spectacle, the involvement and the fun.

For anyone who has ever played an MMOG, to play as a primary tank or a primary healer are almost one and the same.  They require direct focus on an object or enemy that in reality requires little or no thought; there is a feeling of being played as opposed to playing.  Where ArenaNet intend to change this is to create frantic yet controlled combat by involving all players in the single goal of overcoming an objective, be it a dungeon in its entirety or an encounter with a particularly difficult array of enemies.

What ArenaNet are effectively creating are hybrids for all classes.  Where there becomes a level playing field in the ability to support yourself and others (through direct or passive 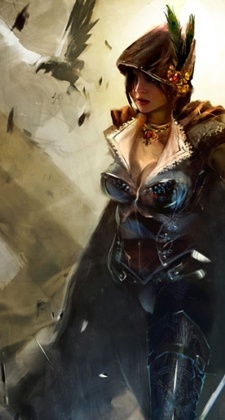 healing and damaging skills) there in turn becomes a greater camaraderie as you realise everyone is an equal.

The recent reveal of the Thief class has been well accepted, not just because of its class type (which alone looks incredible) but because players of such class types are safe in the knowledge they are now on equal footing with every other class released thus far.  In recent times a reveal of this nature would have cast instant doubt on their group viability and survivability.  Rogues, as an incredibly popular class type, were all too often blunt force instruments of death, responsible only for damage.  They not only found it difficult to secure groups but had little in the way of tactical thinking.

With the ability to resurrect and heal to the degree of others (undoubtedly) their party synergy has gone from that of a DPS career, to one of utility and equal requirement. This is the revelation we have all be searching for; to no longer feel ostracised for the classes we chose and the preconceptions of others.

ArenaNet must now continue to build on public relations and their links with communities away from their own doorstep, as they are already preaching to the converted through their blog alone. By reaffirming the idea behind their class system, whether through a video of a dungeon walkthrough utilising an unconventional party or a greater quantity of game demonstrations, they will finally net those who still have lingering doubts.

Let us hope the eventual release of Guild Wars 2 sees a turning point in how we approach class types and the process of MMOG development.  The early signs of the genres evolution are finally here.

“It is not the strongest of the species that survives, nor the most intelligent that survives. It is the one that is the most adaptable to change.” – Charles Darwin.