Since Mass Effect 3 is right around the corner, I spent my precious gaming hours last weekend reviewing some stuff I missed in Mass Effect 2. Mostly, it  was DLC, including the fantastic Shadow Broker story arc (we downloaded this at its launch, but it’s been in my backlog). But I had also skipped one of the crew’s character-focused loyalty missions. That crew member was Legion.

In explaining the issues I have with this character, its mission, and the way the game story treats it, I’m going to be spoiling pretty much everything there is to spoil in Mass Effect 2. Consider yourself warned. I’m also going to have to refer to Legion as “it,” since “it” or maybe “they” would be the only correct way, and I apologize in advance if that reads funny. Let’s just say when I say “it,” I mean the Legion body, as distinct from the Legion “brain,” which is a clear “they.”

Now that all the fiddly stuff is over: I don’t really like Legion.

Let me qualify. There are a few distinct reasons why someone might not like a character in an ensamble RPG. My favorite character in Final Fantasy VII is Cait Sith, but most people find that confusing, because he’s not a mechanically useful character. What I like about the character is his personality, his uselessness notwithstanding. In Mass Effect 2, I like Kasumi, because she’s mechanically useful, but her personality is kind of smug and know-it-all.

Legion has neither of these immediate problems. Mechanically, it is fairly useful, with drone AI hacking abilities and tech skills. Its personality, such as it is, is also superficially fine. The Shadow Broker DLC has a little commentary a player can access, showing each crew member’s personal logs, to highlight some aspects of their personalities. Legion’s shows its kill record in modern Call-of-Duty-equivalents as excellent, but it can’t figure out how to play the story part of games and relationship simulations. That’s a cute and somewhat identifiable touch that many gamers could latch on to. It would work well, if Legion were merely “a strange little robot character.” 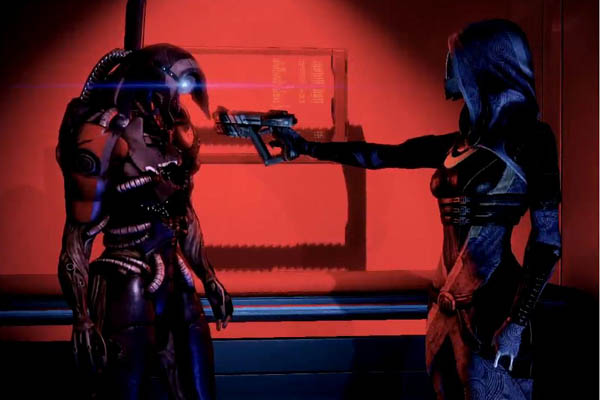 However, Legion is not merely a strange little robot character. Legion is Geth: a representation of the hive-mind of an artificial alien race. So, here is Problem Number One: The Geth were positioned as the major enemies throughout the first Mass Effect game.

In anticipation for the sequel, Aram Zucker-Scharff of Nightmare Mode did a huge takedown of Mass Effect 2 in general over the last few weeks. Now, I liked Mass Effect 2 a lot. I didn’t mind ammo and scanning, but I definitely agree on point five here. In order to allow our team to have an alliance with such a character as Legion, Mass Effect 2 has to overlook or rewrite the role of Geth in the previous game.  In the process, the story from the first game makes less sense, and the epic scale of the first game seems weakened. Now there are the good Geth and the bad Geth. Well, okay.

Another takedown from that same series involves the mission I just completed. So, Problem Two: Legion’s Loyalty Mission. The mission itself, action-wise, is pretty enjoyable. The story is strange. Your decision tree in that mission is a choice between genocide, and the other kind of genocide. (As it turns out, there are two kinds of genocide.) I’m not a person who gets upset if I have to make an evil or morally gray choice in a game, but this is a case where, though neither decision is heroic at all, one of the choices is “Paragon” even though no kind of genocide is very Paragon. Broadly, I am with Jack on this particular issue. I like that there’s no real right answer in this mission. But I don’t like that games with morality systems, like Mass Effect, tell you what the “most heroic answer” is anyway on an issue as challenging as this one. This is a broader issue with game morality meters, and a digression, but it’s highlighted well here.

All of this has been discussed a bit by other game writers, and I’ve seen a bit of debate about the right thing to do in that mission. But I think I’m about to enter virgin territory when I discuss my own, personal account here, and where it leads to Problem Number Three.

When I played through the Mass Effect 2 “suicide mission” the first time, I went in with a disloyal Legion, but the rest of the crew was loyal. It came down, essentially, to choosing between doing that last loyalty mission, or arriving at the final mission fast enough to save all of my crew. I chose to save the crew. 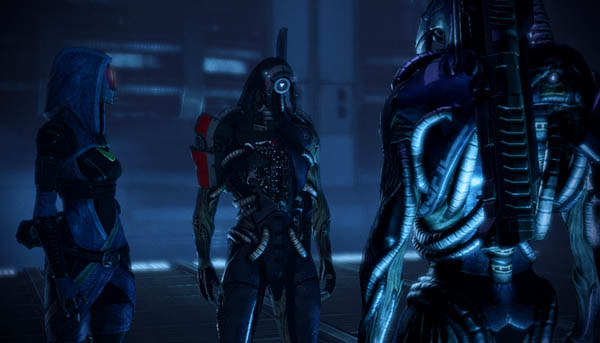 However, I wasn’t working with a guide or any spoilers when I did this mission. I decided it might be possible to keep my one disloyal crew member out of danger if I didn’t use that member for much. The first choice in the “suicide mission” is which technical specialist to put up in the air vents to do… technical things… during an initial infiltration. I chose Tali for this. Then I had to choose someone to lead a secondary squadron. I chose Samara. This turned out to be a bad choice, but, I didn’t know this, since Miranda praised this decision in the game. I figured I had done fine.

(It’s at this point where so many game journalists will probably claim I should have been willing to accept that result, because it’s more dramatic and therefore better to lose a character I care about, or something like that. I believe that I’m just playing this the way the average person would have played.)

Trying again, I put Legion in that position but still had Samara leading the squad. (The game hadn’t given me any indication that the choice of Samara was the problematic one.) Legion died. This time, I figured that to be acceptable losses.

I managed to pull off the rest of the mission without much of a hitch.

If a cast member dies during the suicide mission, the game shows the team having a little funeral for that cast member. I’ve actually seen this scene a few times, because I experimented with the suicide mission until I got the best possible result. (Yeah, yeah, doing it wrong. Sometimes I lost up to three crew members this way! Eventually I did make it out with all of them, despite missing that one loyalty mission.) The first time I saw the scene, I was genuinely puzzled. Who is that casket for, I thought? I only lost Legion. Is that casket for Legion?

But Legion is not a person.

Look, this isn’t me hating, Joker-style, on robots. I like robots, and if a robot actually was a person, and died, I would want to have a funeral for that person. It’s just that Legion is not identified as a person. Legion is a sensory organ for a larger hive-mind entity. It confirms this when you talk to it. Ask it any questions about its person or its race. Legion explains that there is a subtle difference between “individual” Geth, and that difference is perspective. It happens to be the one Geth eyeball that is on the Normandy, helping out Shepard’s crew. But all of its findings and information are uploaded, often at some kind of instant-communication speed, back to the Geth hive brain.

Having a funeral for Legion seems odd in that context. If, say, someone were to have an ear cut from his body, he might try to reattach it. If that were to fail, he would possibly dispose of it, maybe have it preserved, or, if Van Gogh, gift it to someone he admired. What he would not do, not even if he were Van Gogh, is ask all his friends to have a little funeral ceremony for it, complete with a casket. That would probably be weird.

Seeing that behavior in Mass Effect 2, therefore, confused me. The most understandable explanation for the funeral, from an in-world perspective, is that the crew honors Legion anyway, out of respect for its help, regardless of its actual status as an appendage of the Geth. Basically, Shepard and crew are being too nice (even if you play Shepard as a cold-hearted renegade,and, oh, I do). Funerals are for the survivors.

But when I played the loyalty mission for Legion, I also played as Renegade, and that path has some very telling dialog. Legion specifically says that treating one race the same as another may be the wrong way to go. The words Legion specifically uses are “racism” and “anthropomorphism.” 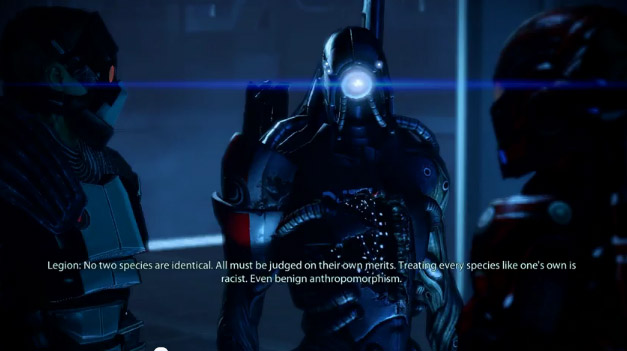 That’s the puzzle piece I was missing when I blinked, confusedly, at the crew pushing a Legion-filled casket out to space. It’s not just that this shell was a part of someone, instead of a whole someone. Having this little funeral for Legion, an eyestalk of the Geth Hive Mind, is really kind of disrespectful to Legion. It’s anthropomorphizing something that didn’t actually want that treatment. That’s why I can’t call Legion “he” when I write about it, despite an initial urge to do so. If I actually wanted to be nice to the character as written, I shouldn’t insult it with these human traits.

I don’t think the game had intended to address this in this scene. It just seems to use the same funeral-scene setup for however many characters die, swapping out the characters attending for the ones in the casket(s). But in having a possibility that the funeral will be about Legion – and just Legion – it highlights a problem with the character in general. Since Legion’s loyalty mission unlocks last, making it the hardest to complete in time, I doubt I’m the only player that just pushed out one, Geth-filled casket before the credits rolled.

I guess if there is one thing I do like about Legion, I like that it makes me think about issues like this. The problem is, though, every time I think too deeply about the role the character fills in the story, it seems to fall apart. I’m not sure that the trade-off was worth it.

However, I have heard that the character will be back in Mass Effect 3, so I’m glad I completed its mission anyway. Maybe there will be some new perspective on this that I lack.  Maybe I’ll even learn to get used to having the guy around. For  now, I guess you could say I’m “Team Tali” where it comes to the Geth.

30 Responses to A Legion of Story Problems