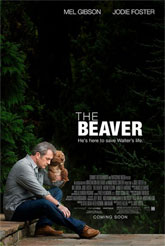 “This whole damn thing left me scratching my head. Foster directs and acts with a five foot wide brush. “

The Beaver is the latest directorial effort by veteran Hollywood actor and director Jodie Foster, and stars Mel Gibson as Walter Black, the very, very depressed CEO of a popular toy company that is going under. Foster plays his wife, Meredith Black.  Anton Yelchin is the son Porter who writes term papers on the side for his high school chums and Jennifer Lawrence (of Winter’s Bone fame) as the pretty, popular girl who falls for dorky Porter for reason known only to her.

I’m not sure what I think of The Beaver, honestly. It flopped big time, barely clearing a million at this writing. Much of this has to be pinned on Mel Gibson’s recent and very public asshattery. I assumed Foster picked him precisely because Gibson’s recent train wreck of a life so perfectly mirrored the protagonist except when researching this review I found out that both Steve Carell and Jim Carrey had considered the role of  Walter Black before Gibson signed on.  Jodie Foster, who played opposite Gibson in the movie Maverick, probably deserves a  medal for the sheer chutzpah it took to  take a chance on Gibson at this point in his career. (Which is about the only award she is going to get for this movie.) Just for some perspective, things have gotten so bad for Gibson in Hollywood that he was denied a cameo in Hangover 2 because some of the cast and crew protested. That is so sad on so many levels I can’t even think about it.

The real star of The Beaver though is, well, the beaver. A mangy, creepy hand puppet that Walter Black finds in a dumpster one wild night while in the process of trying to off himself. Just as Walter is about to check out of this earthly plane, the beaver puppet begins to speak. It talks Walter out of suicide and then proceeds to ingratiate itself into Walter’s life, starting with his family and radiating out into his business and public life. Of course it’s Walter doing the talking. His lips move and everything. It’s Walter giving voice to his ever deepening mental illness through the beaver puppet. Things progress in comedic-dramatic-WTF fashion, going from sad, to chilling, to ridiculous. The movie swiftly gets downright creepy as, one-by-one, Walter’s wife, younger son, and toady business underlings magically accept the fact of a talking puppet standing in for Walter. The only hold out is the older son,  Porter. Apparently, Porter’s role in this movie is as a surrogate for the viewing audience, who won’t for a second accept the premise that Walter with the puppet is any better than Walter without the puppet.

What really rankled me though was watching the often brilliant Foster hop from cliché to cliché. At first she is sad for Walter, then once he finds the puppet and tells her it’s all part of his therapy she becomes maniacally happy until the lie is uncovered at which point she becomes the wrathful, pissed off wife.  Yawn. After a second act, in which the Beaver takes over Walter Black’s life, business affairs and bedroom duties, (I know, right?), Walter begins to realize that The Beaver is a malignant force, a true manifestation of his ever-growing mental disease.  Walter could just throw the thing back into the garbage heap where he found but nothing is ever that simple in movie-land. I won’t reveal the final solution but you can see it coming a mile away.

This whole damn thing left me scratching my head. Foster directs and acts with a five foot wide brush. Happy people are so, so, so happy. Sad people sit and hang their heads because they are very, very sad. The only part of the movie that felt real was the interaction between father and son and the earnest panic in son Porter’s eyes as he contemplates his future as a younger version of Walter. Porter keeps a running list of personality traits he shares with his loathed father on a set of Post-it notes on his bedroom wall and studies them intently, adding to them and editing them as the weeks and month pass. Alas, even Porter concedes to dear old dad in the end and as the camera pulls away for the final shot of a redeemed Walter happily playing with his youngest son, what’s left of the viewing audience are no doubt trampling each other to reach the exits and some fresh air.

Email the author of this review at scout@tap-repeatedly.com.

9 Responses to The Beaver