The process of localizing Fire Emblem: Fates for an American audience has not been without controversy. I am going to try to say this in as nuanced a way as I possibly can, since this has become deeply political for reasons beyond the scope of a review. Review summary: I enjoyed the crap out of Fire Emblem: Fates. But it’s got its problems.

In Fire Emblem: Fates (Fire Emblem: if in Japan), your character is a prince or princess who is caught between two kingdoms at war. You were born in one kingdom (the Japanese-styled Hoshido, Kingdom of Light), but kidnapped at a young age by the other kingdom (the more gothic-styled Nohr, Kingdom of Darkness) and raised as one of theirs. It’s your choice: do you want to fight alongside the family of your birth (Birthright, the easier of the two game scenarios) or alongside the family that you were raised with (Conquest, the more difficult scenario). There is also a middle road DLC scenario that unlocks after completing the other two where you can try to bring peace between both kingdoms. Problems in the world are all resolved by tactical army-to-army combat, pitting a squadron of hero units on one side against an enemy squadron in a kind of chess match.

Minor spoilers from here on. 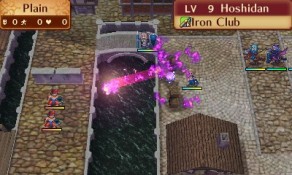 The strength of the game is in its cool tactical maps, which have a variety of objectives, terrain gimmicks, and graphical designs. There are also a lot of cool characters, with beautiful visuals and animations. However, a few extra characters from the previous Fire Emblem were recycled, which complicates matters: some characters are old character designs from the previous title, Awakening, given new names; others are seeming reincarnations of old designs where the new name is an anagram of the old name. With all these pieces in play, someone was then given the task of writing all this into a story that made sense. That didn’t really work out.

First of all, characters come in and out of the story with sometimes the barest of excuses. It’s not clear sometimes which characters your army will have to fight and which characters you’ll end up recruiting (a common reason I might have to restart a map was thinking perhaps I could start up a recruiting conversation with someone who turned out to be an enemy in this chapter and would turn up again to recruit later). The worst thing this leads to is the execution of the “childrearing” mechanic in the game. In Fire Emblem: Awakening, a game I loved without reservation, a time travel story element was introduced. Characters who got married within the course of the game would later meet their future children, who then become playable units. It seems like Fates wanted to also utilize this very popular mechanic, but they didn’t bother weaving it into the story very well. Instead of proper time travel, characters just instantly have babies when married, which are thrown into the baby-growing pocket dimension to become instant adults. This results in a story where sometimes clearly-underaged characters are immediately popping out full-grown sons and daughters in the middle of a war zone, so that’s weird. 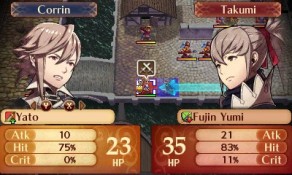 I can’t say enough good things about the map design. It’s clever as all hell, even when it’s blissfully incoherent. Saving one character’s son from his baby-growing sub-dimension requires my army to fight pirates on a ship to ship combat. Why this is, I have no idea. It makes no sense that we are on a boat in the baby sub-dimension. It makes no sense that pirates are in there. But someone designed an extremely interesting tactical map, with three boats fighting one another and their positions relative to each other changing each round. I can’t emphasize enough how cool it is to do a tactical fight on this map. I think I would like it a lot more if story logic explained it being there.

Other combat boards include: arranged gondolas in a location that resembles a Venice canal; an icy village with a lake that can be frozen and unfrozen during the course of battle; a swamp where zombies spawn from painful acid pools; the belly of a dead dragon that is starting to come back to life; a forest full of bandits with spike traps armies can accidentally trigger; rooftops in a city traversable by interconnected staircases, and lots, lots more. These combat scenarios are awesome! There is the barest, thinnest layer of last-minute story duct tape holding them together. It reminds me of a 4th Edition D&D campaign, if lots of energy was put into coming up with incredible encounter designs, but the GM had no idea what motivation propelled the characters from one encounter to the next. “You’re fighting the ice people now. The king sent you there. Just go with it.” I think this game would make marginally more sense if it were set in Candyland, where my brave army had to traverse the Molasses Swamp in order to lay siege to the palace of Queen Frostine. (Developers: if you actually license and make the game I just described, I would probably play it forever.) 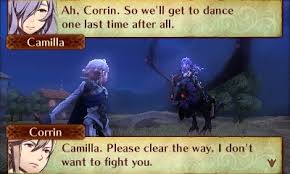 Where it comes to localizing a script this weird, Nintendo of America probably did the best they thought they could with the material they had. I don’t know too much firsthand about the localization process, but I imagine if someone handed me this raw script, I would start attacking it by burying my face in my hands and uncontrollably weeping. There is a person (well, a lot of people) who would make the argument that a localized script should simply strive to be as accurate as possible to the original script. I am not the person to make that argument, since I don’t necessarily agree. I do think, however, that if you are going to make a change, that change should be somehow better than the original version where it relates to the new audience.

Talking about the moment-to-moment writing, rather than the plot, some of the game’s script is perfectly fine. Some of it got what I guess I’d call a “punch-up,” but not all of it did. The result is uneven. The script sometimes indulges in cliches (“You were shaking like a leaf!”) and sometimes tries to slip in modern phrasing (“Love, peace, and chicken grease”) with really jarring results. Some characters were extremely broadly sketched in the original, with no true differentiating traits. Given that kind of material, you could leave it as-is, or you could attempt to give the characters some more nuance: Lord knows there is enough text space for it. The Fire Emblem localizers instead mostly chose the option of giving a character maybe one new personality trait, and running that single thing into the ground. An example that I particularly disliked is the character of Effie, whose animations seem to paint her as a graceful, feminine and even shy character who also happens to be physically strong. NoA’s translations made her into a bench-pressing brute, so her voice just doesn’t match her visuals. On the other hand, other characters, like proper butler Jakob, or spear-bro Shiro, are just great. Some of the minor changes in the game are quite good as well, and I’d hate to lose them for something more technically accurate to the Japanese. It’s simply just not terrific all the way through. 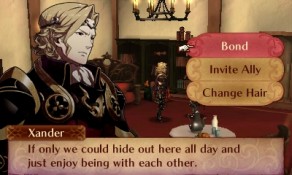 Marriage is still in the game, and the avatar you create can marry basically whichever character you like, though generally only of the opposite sex (with a couple exceptions, this time). I’m not mourning the loss of the “petting” minigame. The first person interactions that happen in your character’s private quarters are odd enough to me without this additional factor and it doesn’t matter too much to me that it’s glossed over. After a character gets married, they can still do a version of the people-petting minigame with their spouse, which allows players to use the stylus to lightly tickle their chosen spouse on the bottom screen of the 3DS. It seems like NoA doesn’t have a problem with a little petting. Just indiscriminate petting. A thing about the first person interactions that I never quite got over is that Fire Emblem seems to assume that, whoever you chose for your spouse, you’re genuinely into having that character whisper sweet nothings into your ear. The voice acting for these segments actually started to move me into skeeved-out territory. Bonding with your spouse is optional, however, as long as you’re willing to ignore a little exclamation point hovering over your in game quarters.

While everyone seems to be talking about the one missing minigame, I don’t see too much discussion about all the other odd mechanics that are still included in Fates. There’s a lot going on here. You can design your own fort, and share that fort with other players over WiFi. Other players can attack your fort, and you can attack theirs. Just visiting other forts peacefully gives you lots of little jewels and other items, which you can forge into your characters’ weapons, or use to buy “accessory” armor pieces that only matter in the context of the fort battle game. Within your fort there’s also a mess hall that lets you combine foods to give characters stat boosts, a lottery to get random weapons, turrets and other defenses you can upgrade, and a bathhouse. Having a nice bathhouse sometimes allows you to recruit a bathhouse loving unit; beyond that, I do not at all understand the point of the bathhouse. 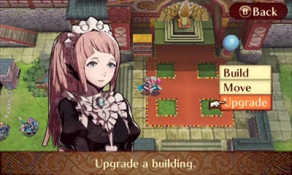 If you can forgive the occasionally-absurd text and the laugh-out-loud absurd plot, and concentrate on the moment to moment joy of moving pretty digital units around a well-designed tactical space, you are going to love Fire Emblem: Fates. I loved Fire Emblem: Fates, but I could’ve loved it more. If you’ve never tried a Fire Emblem and are on the fence about this one, I’d still argue Awakening is superior, and it’s probably an easier introduction to the series. The characters in Awakening all feel fresh, with only a few that are retreads from much older titles. Awakening also doesn’t suffer from Fates’ overstuffed mechanical approach. If you’re set on starting with Fates, keep in mind Birthright is designed as the easier scenario of the two titles, but its story is the worst of the lot. It’s also where I spent most of my playtime although I own both versions, so that has definitely colored my overall feelings.

Playtime below does not include additional hours I sank into a map or two only to lose a single unit, and then reset in a hurry because I’m playing on “Classic” permadeath style but I’m also a perfectionist. I see you there, judging me. There’s more than one way to play Fire Emblem.