…a distillation of everything Naughty Dog has come to do so very right.

I’ll be the first to admit to some uncertainty about the prospect of downloadable content for The Last of Us.  I am not alone in hoping that this game remains a singular entry, rather than the beginning of a franchise.  The Last of Us is Joel and, to an even greater degree, Ellie, and to continue their story from the bittersweet final moments of the main game would reduce its power.

Left Behind at least acknowledges this, and in expanding upon The Last of Us Naughty Dog chose to go for scenes we already knew about but didn’t actually get to see.  It jumps between two events: mid-game, just after Joel was shot at the university, when Ellie has to scramble to stabilize him and escape from the men who did it in the first place; and before, when Ellie’s friend Riley – mentioned only vaguely in the game itself – resurfaces after running away to join the Fireflies.  Both sections of the game take place in malls, and both focus on Ellie, with Joel only an incidental element.  But the similarities between the two end there.

In the “present”, so to speak, Ellie needs to find medical supplies to patch Joel’s wound.  This portion of the game is largely more of the same for The Last of Us, with scavenging, light platforming, and half a dozen stealth/combat sections.  Ellie is, of course, less equipped than Joel, and less so than she is in the section of the main game that follows Left Behind chronologically, so stealth and strategy are critical when approaching the combat encounters.  Critical supplies are scarce in a way that they never were in the game proper. 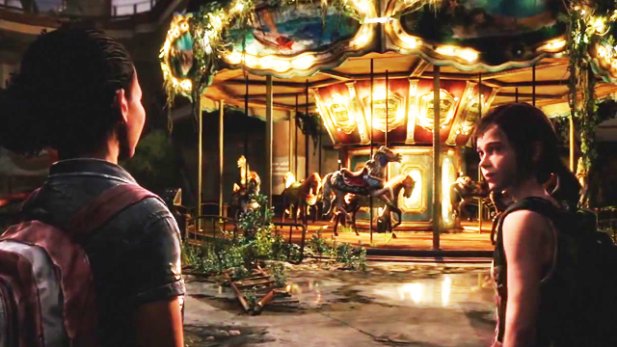 And while that portion of Left Behind is good and ought to provide some challenge for veteran players, the real point of this DLC is in the Riley segment.  This takes place before Ellie ever meets Joel, but after the tie-in comic American Dreams – which is referenced in conversation several times, but not critical to the narrative here.  Ellie isn’t entirely thrilled to see Riley again because she feels Riley abandoned her (or left her behind, you might say), but Riley wants to win back Ellie’s friendship.  What transpires is a lot of that trademark Naughty Dog walk-and-talk, and it’s very good.  Ellie is Ellie, of course, and Riley is well-rendered, as well, and they are very believable friends.

Of course, you’ll always be waiting for the other shoe to drop.  This is not a world in which two estranged friends get to wander around an abandoned mall, make up, and then live happily ever after.  But it takes its sweet time to happen, relying on the “present” sections to provide the gameplay.  Some, therefore, will find the Riley sections dull.  But there’s a lot of heart in them, and a lot of small and precious moments.  Fun in a photo booth.  Playing video games in an old arcade.  The end of the story won’t surprise you at all; a lot of the stuff that happens first will, however, not because they are dramatic plot twists, but because we just don’t see this kind of thing in games much, ever, least of all triple-A console titles.

Even playing on Survivor difficulty and having to retry most encounters multiple times, Left Behind only took about three hours to complete.  Assuming you never fail and don’t hunt for collectibles too much, it’s probably about two hours of content.  For some that will make the $14.99 price point untenable (especially when other games, like Assassin’s Creed IV and Borderlands 2, offer more content for lower prices).  And I can’t say that this is an indispensable chapter in the story of The Last of Us – I didn’t feel going in there was a hole that needed filling, and though Left Behind hardly hurts, I didn’t come away thinking that it fundamentally changed the whole of the narrative.  But it is a distillation of everything Naughty Dog has come to do so very right.  That alone is worth the price of admission.

Invite the author to throw bricks at things in an abandoned mall at dix@tap-repeatedly.com.

8 Responses to The Last of Us: Left Behind