While other Tappers may be settling into Guild Wars 2, I slipped into a slightly less high-profile beta: RaiderZ. Raiderz is a Korean-made free-to-play MMO, being localized for North America by Perfect World. The game is sort of a Monster-Hunter-style game, where players fight lots and lots of creatures, from big to small. The closed beta just began this week, and I’ve spent a few evenings in the game now. So what are my initial thoughts? Read on…

First off… I have to be a little negative. The first impression an MMO makes on a new user tends to be in the character creator. I may just be spoiled by the likes of City of Heroes or Saints Row the Third, but I feel the current avatar creator in Raiderz leaves something to be desired. Only human characters are possible, and there’s a pretty limited range of facial features. Maybe this is something that will be expanded on later for real money transactions; I’m unsure. 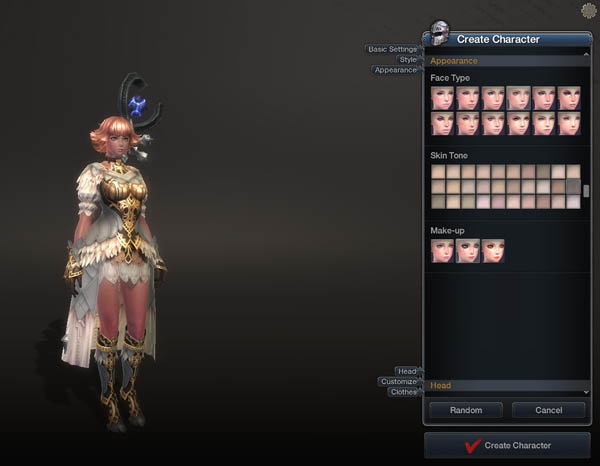 This is the darkest I can make a character.

Honestly, the biggest disappointment is the lack of skin tone diversity. While there’s a wide variety of different hair colors, from brown to blue, skin tones range from white, to whiter, to … sort of dusty, at best. I realize this is part of the game’s aesthetic, and maybe there’s something I don’t understand about the politics of localizing an Asian title like this. Nevertheless, for a Western audience, a darker set of skin tone options would not be remiss. Some players will at least be relieved that the female starting outfits, though a little midriff-baring, are relatively practical as far as these things go. 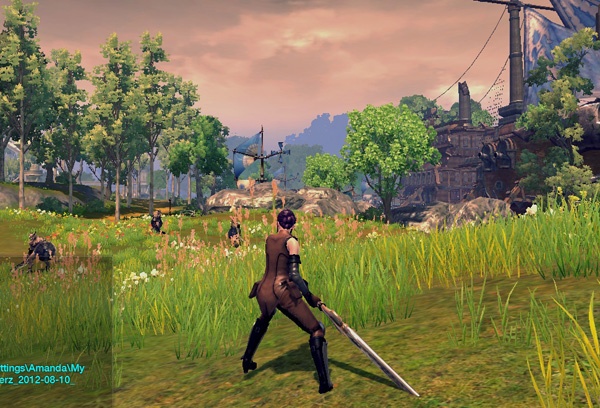 Click on any small screenshot for a full size one.

After character creation, the Raider is thrust into a lovely world full of creepy monsters. One thing that will probably stand out right away about this game is the graphical style. It’s… pastel. Pink sunsets range over the skyline, with yellow flowers dotting the fields and green grass swaying in the wind. Characters, NPCs and PCs all,  all have a very smooth, young, fresh-faced look. It’s hard to mistake this for an American-developed game.

The world itself seems sort of a Final-Fantasy-meets-Monster-Hunter environment. There’s no way to water this down: the game’s got chocobos. Sure, they’re called something else, but, they’re chocobos. Everyone on chat agrees. Most other non-human races seem to exist to be beaten up by the player. I somewhat enjoyed cutting down harmless bunnies with my huge, terrifying Cloud Strife sword, because, I guess I’m pretty terrible like that. 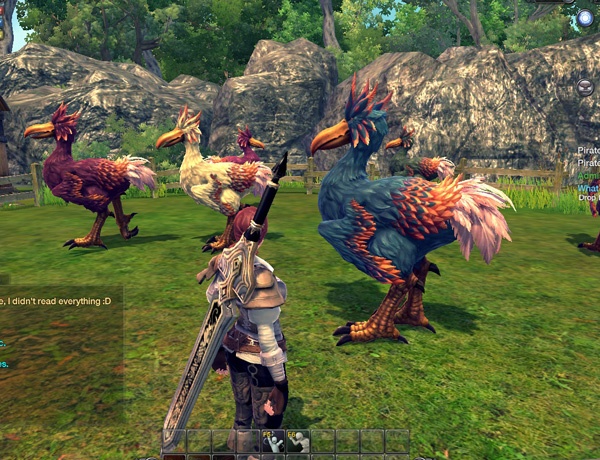 Above: Chocobos. Or maybe it’s Muas or something.

Other than the mundane creatures, monster variety in this game is pretty good. There’s the usual bears and boars in the starting zone, which, I could live without (I wouldn’t even include these if I were to make a fantasy MMO, but I guess at this point you almost have to). But I was pleasantly surprised when, an hour later, I saw what initially looked like a serene background statue suddenly step off of her pedestal and attack me. Pleasantly surprised, then running for my life, that is.

The game doesn’t just have little mobs – it has big boss monsters, as well. This is what makes RaiderZ sort of a Monster Hunter-like MMO. Big boss monsters have distinct looks and attack patterns, and tend to spawn in the open wilderness to menace players. They’re critters that take some strategy to fight. 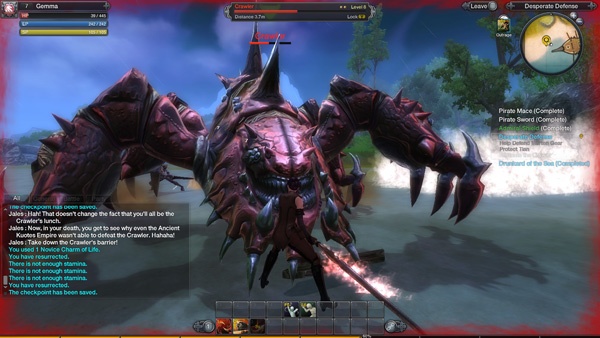 Augh!! This is the screenshot right before my untimely death.

The combat system in the game is fluid. I started out trying the Berserker class, which, as I mentioned before, uses a giant anime weapon. It seems to be a really popular starting class, perhaps because of said giant weapon. All classes have a basic attack combo, activated by clicking the mouse in the direction of a target. There are also a few special abilities on the number pad, which is familiar from most MMOs. Pressing a direction and attack at the same time changes your thrust angle. The coolest feature is an active dodge roll maneuver. Timing this right allows the character to actively dodge out of the way of an incoming attack, though it consumes some stamina. It’s a neat feature that makes MMO combat seem a bit more skill-based and interactive.

The class system in the game is flexible, so players can change jobs on the fly. The game does seem to have some difficulty signposting this, though, and some tutorial prompts are entirely missing, possibly to be added later. I can forgive that, because it’s Beta, though, I was a little weirded out when I suddenly encountered a block of untranslated Korean in the localized game. 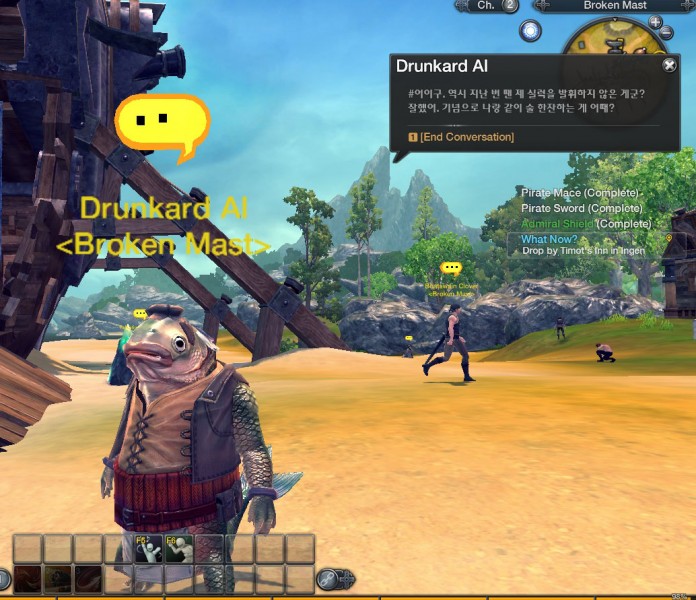 Al may be drunker than he looks.

One neat feature in the game is that the world will literally change around the player. I’ve seen this in City of Heroes, but RaiderZ seems to take it to a larger scale. Even the enemies that you encounter in the world can change, based on what level you may be. People lower level than I am might be fighting creatures that are completely invisible to me, on the same map, and questgivers move around in the world depending on what part of their story I’m in. I would say this is really cool… but at the same time, the idea that I’m seeing a totally different reality than all the other players is a little eerie. It also makes the storyline pretty linear, though this may open up past the starting area.

The game doesn’t seem to require players to team up, exactly. If there’s a boss monster spawned on the map, a group of players can all attack it at once without formally grouping. If they bring it down, everyone who attacked the monster seems able to access to its reward drop. This is a really nice feature to prevent things like “kill stealing.” A lot of the game quests involve taking down giant monsters that would be too tough to face alone, and the circumnavigation of a formal teaming requirement means you can team up without really having to commit to teaming up. As a stranger in a new world, I like that. Who wants to form a group with strangers if they don’t have to?

The only PVP I’ve seen so far takes the form of organized duels, which one player must initiate, and the other accept. I may still be getting the hang of this system, as I’m not sure what it nets me other than bragging rights when I beat a dude down. The kids seem to be into it, though. 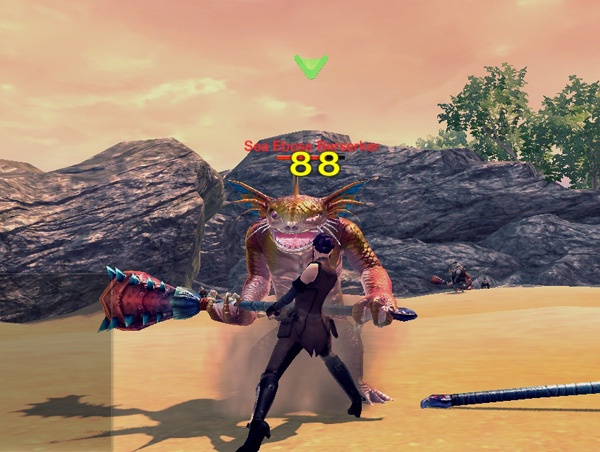 Kill five of these too.

Quests, so far, are a little lackluster.  They follow very familiar MMO patterns: “Kill ten so-and-sos.” “Collect the meat from 5 so-and-sos.” “Go click on these three things.” “Deliver a letter to such-and-such.” Being that the quest text is translated to English, it’s serviceable, but a little flat. Maybe it’s not right to complain here; I know it’s really hard for an MMO to innovate in this department without falling on the old standbys. I’ve played enough of these things to know, at some point in my life, I will almost always have to kill ten boars. (Or ten boars in the form of enemy aliens or gang members.) The only new-and-different sorts of quests are the sort where the game sends the player to fight a giant boss monster. These are cool and they’re definitely a highlight of the game for me.

When I first saw the game demoed at PAX East this year, I was pleasantly surprised by the quick combat and the game’s density. I was pretty worried that, as an Asian-style game, it would be extremely “grindy” and require a lot of time investment. However, RaiderZ seems really suitable so far for casual play. Since the grouping system is loose, you don’t need to get a bunch of friends to try and take a monster down; just a bunch of anybodies will do. And leveling up is mostly done by following the storyline. Grinding endlessly on mobs isn’t terribly rewarding by comparison. 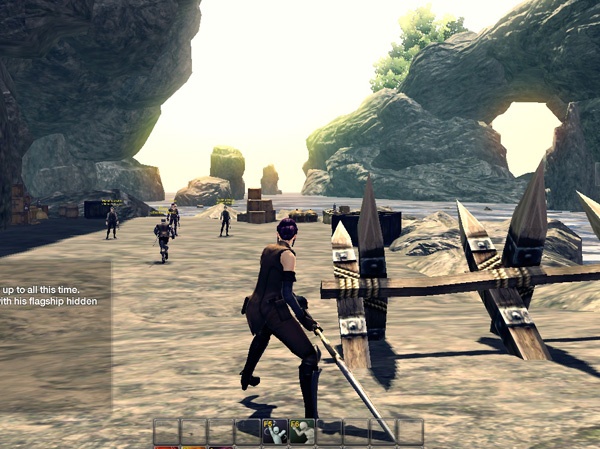 So that’s RaiderZ. Monster Hunter fans might want to at least give it a try, and see how it compares (Full disclosure: I personally have not played Monster Hunter; I am only broadly aware of the similarities). As for me, so far, it’s a very attractive, casual-friendly MMO that I’ll probably fire up occasionally, but it’s unlikely to become an obsession.

The good news is, it’s free to play, and for anyone grabbed by this description and screenshots, I have two beta keys I’m not using! I’ll be happy to send them along to the first two commenters to show interest and provide an e-mail.