Mat and I were talking about this just the other day, but the poor fellow had work then a soccer game, which doubtless delayed him. I’m hoping to see his first impressions of Square’s latest epic soon, but you know how those football fans are…

So Final Fantasy XIII is finally available in The West. It’s gone dual-platform, dropped the Fabula Nova Crystalis subtitle (it means “new crystal chronicle”), and is the only Final Fantasy I have ever played. Actually I think I played the first one on the NES for a short while, having borrowed it from a friend when I was… like… twelve, but he wanted it back so I never got far. 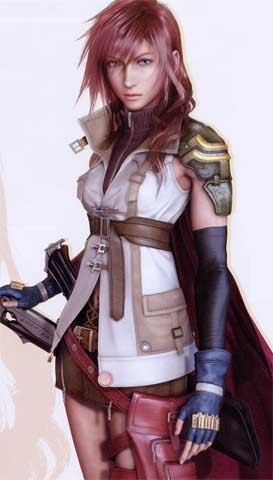 FFXIII is an interesting bird. It is very Japanese, though not nearly so Japanese as some stuff we see on these shores. It strictly adheres to character and plot archetypes that are so textbook as to be essentially required in most Japanese pop entertainment, but are at the same time so fucking annoying to Westerners that only the most unwashed, dateless, Newtype-reading ex occasi Otaku could possibly enjoy them. But the rest, I gotta say, is pretty cool.

Yeah, it’s linear. I mean so far. It’s pretty corridor-focused. Move, fight, fight, fight, cutscene, move, fight, cutscene… you get the picture. And yet, the more I play the more I roll my eyes at the people who complain about the linearity. Final Fantasy XIII is what it is. If you went in expecting a western RPG, of course you’ll be disappointed. If you went in expecting anything other than WHAT IT IS, which is a JRPG to its very bones, of course you’ll be disappointed. Western RPGs are ferociously realistic, while JRPGs are spun sugar and gingerbread, exuberant extravagances of hyperbolic fantasy. There is no effort here to make you suspend disbelief or “accept” the world as real. It’s not real.

But like its predecessor before it, FFXIII does make an effort to move somewhat in the direction of serious narrative. This is a blood-soaked anti-establishment tale that begins with a massacre and continues with death and loss. As the ads say – would you fight to save a world that doesn’t want you in it?

As far as protagonist Lightning is concerned, the answer to that question is NO. Unfortunately Lightning accidentally finds herself surrounded by the most pathetically motley crew of wanting-to-save-the-world losers you could possibly fathom, and as hard as she tries to get rid of them, they’re stuck together. As you might imagine, Square’s cutscene department has outdone itself (I’m playing on PS3, and I hear the 360 version is slightly lower quality, but nothing to worry about) in terms of splendid CGI. The voice acting is good. Even the characters that I absolutely despise are actually playing their roles well. The actress who plays Vanille, for example, is just doing what her director told her to. The fact that human arithmetic hasn’t invented a mechanism to calculate the level to which I hate Vanille notwithstanding, the actress is really trying. Beyond that, some of the English cast are downright exceptional.

One of the things I hope to hear from Mat is whether the characters are all voiced by American actors on his side of the pond. It would be pretty cool if Lightning spoke all, you know, British over there, all sodding and whilst and honour and name on and all that. I doubt Square bothered, but for a production as lavish as this it would have been nice.

The first 4-5 hours of the game introduce the concepts, but it’s not exactly a tutorial. The game just stops to teach you new things as they’re implemented. And while the tactical battle system has not – so far – lived up to some of the raves about it, it does give the player a new perspective on controlling real time RPG combat. You can layer your commands with incredible granularity or leave the game to micromanage, while you simply keep an eye on the big picture, switching between customizable “paradigms” – general party behaviors, like hardcore attack, support, buffing, etc – as needed. Regardless you push a lot of buttons, but as Penny Arcade once said about FFXIII’s predecessor, it does at times feel like the game is masturbating.

Still, I’m enjoying it immensely. Would I have done different things with the characters, particularly the tormented and bitter Lightning, had the script been in my hands? Yes. But then, I’m a westerner, and Final Fantasy has never been about pleasing western gamers so much as tolerating them. Eight hours in, I don’t regret the purchase for a second.