With over 300 hours invested, I’ve lost patience with Team Fortress 2.  As a team based, class based shooter, its original focus was that of a competitive but organised multiplayer experience, which required cooperation between you and team mates in order to be successful.  The result of its mutations and gradual evolution over many years however, is that Team Fortress 2 is distinctly lacking two key elements: team-work and organisation.

After years in the wilderness of Valve-Time™, Team Fortress 2 was finally released in October 2007 to a fanfare of praise and adoration.   Stripped of all unnecessary baggage that a ‘realistic’ product encompasses (al-la Battlefield: Bad Company 2), the game was and still remains (to some degree) a pivotal example of what Quake 3 Arena started: to focus on what players want, without weighing down a users experience through superfluous HUDs containing unnecessary information.  In Team Fortress 2’s case, it’s the classes and the team work that make the game.

What’s now apparent though, is that the micro-transactions so devilishly designed by Valve, the crafting of items and the trade of hats has surpassed the importance of the two key elements that made Team Fortress fun in the first place.  This shift of focus to secure revenue for a game that (and in Valve’s defense) has given an abundance of updates has undoubtedly begun to detract from a game that was once much more than just a 3D trading experience.

Valve have learnt valuable lessons from Team Fortress 2 and continue to use the game as a platform for the focus of their experiments.  The blog and community involvement this attracts opens a direct line of communication between developer and consumer, while the class movies and videos have given valuable lessons in marketing, the use of animation as well as sound and voice acting, which have already begun to spill over into other Valve products (see Portal 2). But where praise is due there is also criticism and Valve have opened Pandora’s box with its use of micro-transactions.

First and foremost Valve and more specifically the team behind Team Fortress 2, deserve the financial support earned from micro-transactions.  A ten year development cycle and countless free updates of gargantuan proportions must have come at great expense to a company that prides itself on quality (although Team Fortress 2 Steam sales spiked after each class update), but where the game has begun to falter isn’t through the necessity for these items (inevitably that is a player’s choice) but in the fact that the game has no focus besides these.

Entire banks of servers devoted to crafting and trading are now commonplace and to see 24 player servers filled with motionless individuals chatting and trading, in order to secure a specific weapon or hat was surely not Valve’s intention.  When players feel the need to trade for meaningless objects more than playing the game itself, something has surely gone wrong on Valve’s part, irrespective of the revenue this draws.

My greater concern though isn’t the sheer abundance of class weapons, but the lack of focus on team work and cooperation.  A game whose sole purpose was to be a fast paced, streamlined experience has become completely contradictory now that such weight has been placed on superficial objects with questionable balance.  Inevitably, how can a game that underwent 10 years of development and extensive balancing be balanced, now that new weapons are tested for days, as opposed to months.  You only have to visit the Mann-Co. Store to see new weapons uploaded regularly, many of which as a frequent player I’ve never even seen before. 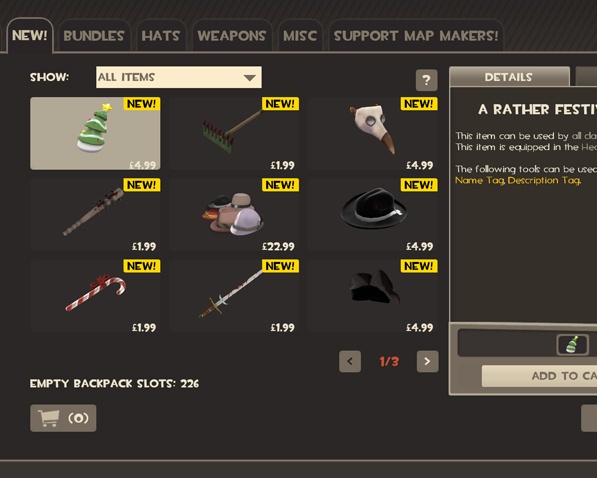 Those price tags are real. I shit you not.

Which brings me back onto quality, something that Team Fortress 2 has begun to lack.   Poor animations or the lack of animations entirely on countless weapons is entirely at odds with what Valve are synonymous for.   Despite many weapons having fantastic models, to see the hammer of a gun fail to move while firing or bullets remaining in a weapon’s chamber despite unloading the entire barrel is sloppy and not only undermines Valve’s efforts, but serves to remind us that perhaps profit is coming before quality.   Inevitably, regardless of how much I may want a weapon, why would I use it if it happens to drop or worse, pay upwards of £6.49, for an item with half finished animations?

As it currently stands, I’m unsure how Valve can even begin to salvage the competitive, team orientated element of Team Fortress 2.  The game is bigger and bolder than what it once was and the revenue earned from micro-transactions is staggering (five figure cheques were handed to the first of the Poly Count Pack winners for a single weeks worth of sales) but I can’t help but wonder as to whether this has come at a price.  Not one of financial fortunes of course, that much is clear.

The phrase “selling your soul to the devil” springs to mind.