My greatest fear is to be trapped alone in a confined space with a blind human, in total darkness.  They have a heightened sense of smell and hearing, and are searching for me.  I’m not actually sure where this specific fear comes from, but so far Penumbra: Overture is ticking two out of three…

Fear in video games for many however, is an odd concept.

A recent conversation with my girlfriend about Penumbra: Overture went something like this:

Me: “Penumbra, you know that game Gregg bought me for Christmas?”

Me: “Because it’s so bloody scary! Imagine you’re in the dark, on your own in the middle of no where, in a mine, with something there with you.”

Me: “Well yes it’s just a game, but it doesn’t mean its not terrifying.  Here, I’ll let you play it.”

Jem: “There’s not much point really, I wouldn’t even know how to move about.”

Well no she wouldn’t in truth, but in Penumbra: Overture you don’t want to move anyway. 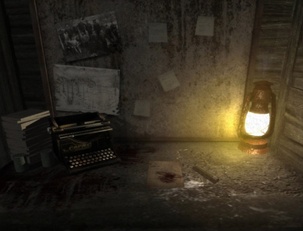 I played the game for the first time on Tuesday, and lasted only forty minutes. Hot flushes, sweats, jumps, and sheer trepidation was the order of the day here as I skulked about in the pitch black lonely corridors, too scared to even use my torch for fear of what might be in front of me, or what could see me.  I made it to the office, which is embarrassingly close to your original starting position.

In that office the relief of sanctuary was unparalleled.  The same feelings of relief that at the time, the storage rooms in Resident Evil offered.  Coincidentally this room also had a type writer and chest which was thankfully minus the ink ribbons, but regrettably missing the tranquil music.

It is a strange feeling to be so relieved when playing a video game, as if I had been holding my breath under water for far too long, to finally breach the surface and breath.  I started to relax in this room.  Merrily searching through draws and desks without a care in the world, completely oblivious of the mental horrors that awaited me if I were to leave.  The single shaft of light descending from a grate in the ceiling like a beacon of hope.

Then, the whispering starts in my ear, and a sense of dread descends.  I daren’t turn around for fear of “what if”, the same fear from watching the final ten minutes of The Blair Witch Project.  I now hate that office.

Penumbra: Overtures beauty lay in its ability to create fear through the human imagination, and the unknown.  Fear is personal and subjective, and yet Frictional Games have managed to refine the genre with such finesse through simple basic principles (notably the removal of weapons, its remote setting, and abject darkness)  that other games which call themselves survival horrors should be ashamed of themselves.

Am I truly scared when I play Resident Evil, Bioshock or F.E.A.R? not particularly. They’ve made me jump from cat-scares, and play cautiously, but never truly scared.  After all, how can anything be truly scary when you are walking around with an arsenal of weapons that could level a small town.

S.T.A.L.K.E.R.’s greatest level of fear was at the start of the game, when the player had very little resources.  By the end of the game, armed to the teeth in exo-skeletons and weaponry, I was no longer scared of anything, and instead swept entire areas with a fine tooth comb.  Every nook and cranny in the dark was explored, safe in the knowledge that anything I should encounter, would be swiftly dealt with.  Bioshock was similar, its opening thirty minutes frightening when armed with only a wrench.  The atmosphere thick with tension as you slowly work your way from the Bathysphere, deeper into Rapture.  Sadly this all ends too quickly.  Plasmids arrive, and so do rocket launchers, and like S.T.A.L.K.E.R., encounters may still make you jump, but you certainly won’t ever need to pluck up the courage to play the game.

It is through Frictional Games’ subtlety that makes Penumbra: Overture so terrifying.  The game is so thick with fear, even from the very beginning it is suffocating.  You have a torch, but it has a limited battery.  You have a glow-stick but its range is centimeters, not meters.  You have paracetamol, not health kits.  While none of this may be revolutionary, Frictional Games’ execution of Penumbra: Overture, from its opening cutscene to your first encounter, all aided by subtle methods of exposing the player to the story, should be applauded.

I used to be terrified of Thief and System Shock 2.  I now ask myself on a basic level, why should I have been; I had a sword, bow and arrows, guns and psionics.  What do I have in Penumbra:  Overture for 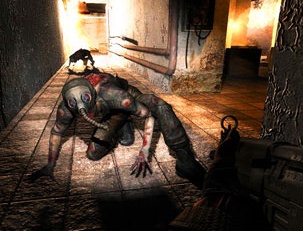 protection? A hammer and the darkness.

Of course, it would be unfair of me to sweep aside Thief and System Shock 2 (SS2), disregarding their fear factor now I’ve been exposed to what the genre can offer.  I sadly and regrettably never completed either game, fear of actually playing both caused such paralysis I couldn’t actually bring myself to play either any longer. When I did pluck up the courage to return to both, so much time had passed I had forgotten what I was undertaking.

If I were to ask myself would I find Thief and SS2 scary now, I would still say yes.  But I am confident it would be a different level of fear.  I would still be scared; its relatively impossible not to be when trapped alone on a infected spacecraft, or bumbling about in a forgotten haunted tomb.  However, you can be safe in the knowledge that you have weapons and resources at your disposal, which all too often cuts through the atmosphere the developers have so successfully created.

With only 2 hours, 43 minutes of Penumbra: Overture under my belt I suspect that the paralysis I encountered in Thief and SS2 may make a return, however I am determined to complete it. I’m willing to play thirty minutes every two weeks if I have to (fifteen minutes spent mentally preparing myself). That is enough for me.

Fear is something developers are quick to undermine with action, yet here is a game and a development studio which shows you don’t need fancy tricks or multimillion pound budgets to create suspense or fear, just the basics of fear itself: vulnerability.