God’s an interesting subject, whether you believe or not, and it’s hardly surprising that we’ve seen the divine presented, interpreted, discussed, reflected upon, reviled, worshipped, and even made playable in various artistic media throughout history. God him(her)self, meanwhile, remains decidedly mum.

While I generally restrict myself to inventive holiday announcements, alerts that I’ve broken the site, or unbearably lengthy video game criticism, today’s subject is television. I do watch it. And I recently took the time to watch the new Battlestar Galactica again, all the way through.

Let me put myself in a very small minority: those who loved the ending of Battlestar Galactica. I loved it the first time I saw it a year or whatever ago and I loved it again this time. This minority, though, is so tiny that so far as I can tell, it includes… me. Oh! And my brother Marcus.

I think that’s it.

Opponents of the club include pretty much everyone else, from esteemed fellow Tapper Jay Dobry to famous authors, screen critics, Alliance of Awesome fellow Harbour Master, many coworkers, people on the street, crazed Sci Fi Channel forumgoers: basically everyone else who watched the show. These people, many of them fine fellows and fellowettes, range in their opposition to its conclusatory revelations from mild dislike to burning hatred. Literally burning. I’d borrowed the DVDs from a friend a while back and Dobry picked one up, said, “what’s this?” looked at the cover, realized what it was, made a shuddery bleah sound, and dropped it as though it had burned him. Then he shouted at me.

After five seasons, it turns out that God did it. I think I can say that without directly spoiling any specifics, but there might be spoilers later on, so read at your own risk. People saw it as a foolish deus ex machina, a lazy ending to a show that had otherwise been intelligently structured and full of rich social commentary. To their view the revelation that God did it cheapens everything else.

Why Those Individuals are Entitled to Their Opinions, but Nonetheless Incorrect in this Case

It’s true that God did it, but the closing episodes weren’t the first time that idea had been bandied about. In fact, if you go through the whole show you’ll see dozens of indications to that effect. I don’t dispute that “God did it,” I dispute the suggestion that it was a last-minute narrative hack, that it was unplanned, or that it wasn’t strongly supported by the rest of the story. In fact I think it was the whole point.

Battlestar Galactica was about the relationship between the Creator and the Created, and how the latter  evolves to the point where it has the capability to become a Creator itself, resulting in a cyclical pattern. In Battlestar Galactica, humans were fashioned by some sort of superior consciousness which happens to dislike being referred to as God, but is nonetheless so superior as to be divine and unknowable. Humanity, in turn, evolves to the point where it can create its own life, and does so in the form of the Cylons. Like errant teens they rebel, creating their own culture and society. Once again this new form of live evolves, and eventually the Cylons have the capability to create new life… which of course they do.

Which is a curse, not an uplifting reflection on the elegance of the cosmos. That it’s happened before means that creation wrought destruction; that it will happen again means the cycle of creation and destruction hasn’t been broken and will perforce repeat.

I would have disliked the ending if, out of the blue, God had turned up and starting smiting, or changed established constants in the story, reducing to irrelevance the actions and sacrifices of all the non-omnipotent other characters. But that’s not what happens at all. The characters simply come to realize that they and their decisions exist within a larger pattern which is not easily recognized or understood. They’re not locked in to any fate; their free will does have the capacity to break the cycle, it’s just very difficult to do so. But time after time they’re to keep trying. And while the whole picture isn’t revealed until the final episodes, there is ample evidence throughout the run of the series that this is what its creators had in mind. 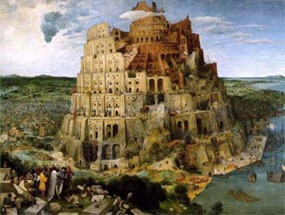 The Tower of Babel myth bears some similarities to Battlestar Galactica, but is not entirely parallel. Humans built the Tower of Babel as a way of reaching God, out of a desire to be on the same level, and God didn’t like that. Wrecking the Tower was a way of putting people in their place. The “God” of Battlestar Galactica, meanwhile, doesn’t seem to mind that humans have become godlike themselves, creating life where before there had been nothing. God doesn’t cause the Cylons to rebel and God isn’t responsible for the near-destruction of both races. They do that to themselves.

God in BSG is one of two things. It could be an actual divine entity whose existence transcends all others, meaning that no matter what, nothing else could ever aspire to it; or it could be an intelligence that did break the cycle, presumably after going through it a bazillion times just like the humans and Cylons have.

And while Battlestar Galactica’s God does influence events to some degree, none of it is sufficient to affect the outcome of the show. The characters remain free to act on or ignore the little nudges that God gives, and it’s up to them whether they restart the cycle or break free of it. So that’s not really a deus ex machina type of event at all. There’s plenty of evidence throughout the show that God’s involved, but as an influence rather than an imperative force. This manifests itself in all kinds of ways.

From the beginning, Gaius Baltar interacts with someone that no one else can. This imaginary friend never explains itself and over four seasons he goes through a litany of potential explanations – lunacy, tumor, implanted device, actualized guilt, everyone else really can see her and they’re just fucking with him, drugs, head trauma. The least likely possibility turns out to be true: it’s an angel. As angels go it could be a little more explicit in its advice, sure; it might have chosen a more approachable form; but it’s an angel. From God, sent as guidance. Whether he follows the guidance or not is up to him. 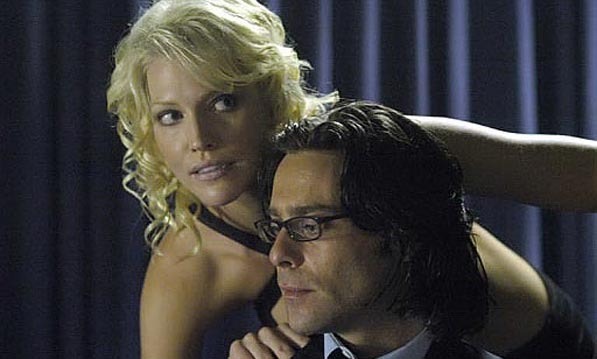 Another character, meanwhile, reappears in perfect health after apparently getting killed in a way you don’t really come back from. Everyone can see her, but after some initial suspicion they just sort of accept that she somehow managed to evade death and find a way back to the group. Evidence that she really did die and that whatever she is now has nothing to do with what she used to be troubles her, but she remains driven to complete some sort of task, to fulfill some sort of role. She doesn’t know what it is. Still, when the moment comes, she does exactly as God intended her to do. And then, her work finished, she’s recalled, turning out to be yet another divine agent who – for convenience – took the form of someone who had died, because she needed the trust and cooperation of others around her.

A lot of this sort of thing peppers the narrative of Battlestar Galactica, so in my opinion it’s reaching to claim that the writers just slapped God into the finale and called it a day. I get the sense that it was the story they always wanted to tell, and it’s more that people don’t like that story than that they can find any actual fault with it. As for me, I liked its symmetry, and I admired the amount of foresight and planning that appears to have gone into its crafting.

And then She Woke Up

People don’t like deus ex machina because it’s bad narrative. Emotionally, it cheapens the investment made by the consumer, an investment undertaken in good faith. If I read a novel, I’m tacitly indicating that I apply a certain value to the act and to the content; I am giving my time and attention to something I believe will be worth it. If it’s not I get upset, and if it’s really shittily not – like saying everything was a dream or whatever – that makes people grind their teeth like little else. But the presence or influence of something omnipotent in a narrative doesn’t necessarily mean it’s a deus ex. That’s the mistake people make when they look at Battlestar Galactica.

It is a trickier subject in games. Interactivity means player has an even greater stake in directing the outcome, so they’re likely to be even more pissed off if that affordance is taken from them. But it can be really satisfying when properly implemented – for example, the end of Half-Life 2. For the last ten minutes or so you’ve got a weapon so powerful nothing can threaten you. And for those ten minutes you revel in your unstoppable killing machine-ness. It’s a treat. Overdone, it would have ruined the game.

Games, like space opera television, are a good avenue for literary discussion of the divine. I admire Battlestar Galactica because of what I perceived as ample foreshadowing and a fresh, interesting perspective on the relationship between people and God. If it didn’t do it for you, it didn’t do it for you… but if you’re on the fence, go back and give the show another shot. You might change your mind.

18 Responses to God Did It

Side by Side: Very Very Valet