There, now I’ve mentioned Dark Souls quicker than the clever folks who thought mentioning it after eight words had won it for them. No, I win! I win at being another lazy and unimaginative writer. Or is that even fair? I think it’s not, for anyone who were to write about Salt and Sanctuary without mentioning Dark Souls would surely be stifling the urge at every turn. But I don’t want to focus on that more than is necessary, it’s boring.

I’m going to do something unusual and keep the rant portion tight(ish). First, in case you don’t know what this game is, here’s the brief: Salt and Sanctuary is a 2D interconnected-world, side-scrolling platformer with medium-paced, deliberate and strategic combat, a style of combat very similar to Dark Souls’. The moment-to-moment gameplay’s obvious forebears are Super Metroid and Castlevania: Symphony of the Night. Especially the latter. That’s the short of it.

Dark Souls III comes out in less than a month. It’s the fifth game of its style to be developed by FromSoftware over the past seven years. With back to back releases in 2014 and 2015, and now again in 2016, Souls overload is here. Backlash is here and still coming. To those who don’t care for the games or understand them we’re seemingly at the breaking point. Even some devotees are weary. How does a developer, or an industry for that matter, lift up the most worthy parts of these games, the best influences, and carry that torch? How do we all keep it from being ruined? I don’t know. Its influence has reached some people so deeply that the only way they know how to process that is by making the same game. Look no further than Lords of the Fallen. Of course open world games are as prevalent than ever, their style being endlessly re-used, re-tried and re-skinned. For all their popularity has one game ever copied another like Lords of the Fallen copies Dark Souls? Perhaps it seems more obvious or startling because Dark Souls and Demon’s Souls are such original works. I don’t know how we value the merit of a game like that. It’s good enough on its own; it’s just impossible not to remark on its homage.

And so we have Salt and Sanctuary, the second video game that is entirely unabashed about its influence. I think the key difference is that it’s done in such a different genre, 2D platforming. Lords of the Fallen wasn’t able to add much substance which Dark Souls lacked, minor tweaks and such notwithstanding. Here the gameplay actually most closely resembles Symphony of the Night, not only a genre classic, but one of the most well regarded works ever. It’s a style I respect personally, but have never sought with much vigor. I’ve played the big favourites I mentioned, Super Metroid and SotN, but never delved too deeply into either, nowhere near finishing them. I’m simply familiar with the roots. I think serious fans of these types of games may have quite a treasure on their hands with Salt and Sanctuary. The game has serious merit from what I’ve seen so far – I’ve played for only about 3-to-4 hours, defeated two area bosses and am level 9.

In an effort to sway non-believers I’ve always tried to tell people that Dark Souls most resembles those two classics which players and critics alike constantly fall over themselves to anoint. “Backtracking” is that word always related especially to the Metroid games. I’ve hoped critics would focus on this brilliant aspect (which only really applies to Dark Souls, and Bloodborne to a far lesser extent) rather than the tired difficulty angle (though that’s a different rant I’ve been saving entirely). Unfortunately most of them do not do this. The Souls series runs the risk of becoming farcical, and I daresay the marketing arm of Bandai Namco is the worst culprit at this point. How many ways can players be told to fucking “prepare to die” already?! They sadly won’t highlight the many other virtues of these games, instead just blathering about how fucking rad the difficulty is, and how awesome you are for succeeding. They’ve lost the joy. Now, however, with Souls Ape 2 my comparisons have never been more apt. I’ve been saying Dark Souls was like Castlevania but everyone else was too busy talking about how cool you are for being able to beat it? Oh, would you look at that! They made a game that is 100% homage to Dark Souls in the motherfucking vein of Castlevania! Breaking news: I’m a goddamned genius.

Verified: I’m the number one source for when you want to hear a guy tell you he’s the smartest Dark Souls person on the internet, whether I’m right or wrong (it’s a foregone conclusion that I’m devastatingly wrong).

Here are the things I’ve come across so far that resemble the Souls games. 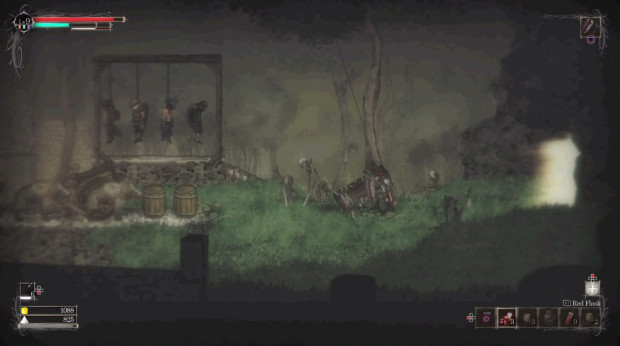 There’s probably more I’ve seen, and yet more I will see. You get the point. If it wasn’t clear enough: there’s no mistaking where this game comes from. The thing is, it seems (so far) to be a really solid game on its own. The world design so far (I’ve been to 5 areas roughly) is a semi-open, semi-linear interconnected kind much like the other games I’ve mentioned. There are a lot of secret doors to be found, ladders to be kicked down and shortcuts to be opened.

Character creation was very Souls-like, and there seemed to be quite a variety of classes. I chose the Paladin, which was a sword and shield heavily armored type. There was a Hunter class which gives you a whip (I hear Castlevania fans are going this route), a Chef class which just gives you a chef uniform and a wooden spoon (Deprived?), a Thief, a Knight, a Warrior, a Mage and a few others. I’ve heard that you’re not locked into your starting class (like Souls), but looking at the game’s skill tree it seems that an early focus on a particular style of play will be beneficial. The skill tree actually appears to be the most unique thing about Salt and Sanctuary. It’s a massive, branching mess that must have hundreds of options and dozens upon dozens of paths to achieve different builds. This is most likely where the game will develop a devoted community and gain longevity through the viability of variety.

As for the second-to-second gameplay, the first thing I noticed is that the player character moves somewhat slowly; I’d venture to say slower than your average platformer (keep in mind platforming is not really the focus here). Movement is slow, combat has different combos and rewards players who refrain from button mashing. There is unsurprisingly a parry-riposte system, rewarding successful parries with massive damage bonuses. There is even invincibility-frames rolling. Rolling, jumping and blocking seem to be the three methods of avoiding damage in combat. I haven’t yet dabbled with magic. The combat feels very good from what I’ve played, and it seems to be balanced and fair, which is of course one of the great virtues of Dark Souls: that fair and balanced, heavy combat. Salt and Sanctuary also manages a lumbering quality in its combat that I’m not experienced enough in the genre to compare to something else, but again, it feels right along with everything else paying homage. 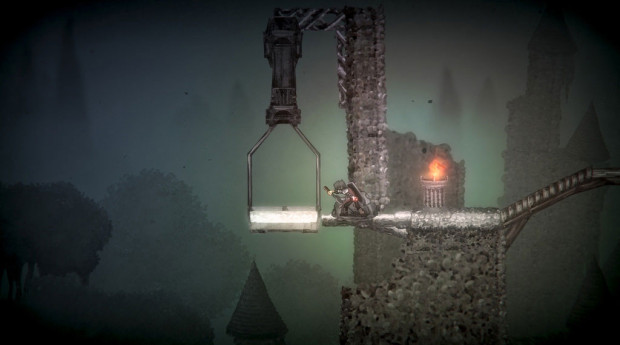 Pleasantly, from the two bosses I’ve faced, it seems developer Ska Games also didn’t fuck up boss fights. They challenge the player to use the tactics you’ve learned, and they seem difficult at the time, but with patience they reveal their weaknesses. I was a bit too eager to put down the Sodden Knight (who I imagine is the first boss for most or all players) and died three times before coming out victorious. Fighting the second boss I found, the Queen of Smiles, I exercised much more patience and was able to take her down on the first attempt. If this all sounds familiar … well, yeah.

At this early point I don’t think there’s much more to add. In my limited experience Salt and Sanctuary is a capable and intriguing game. From what I know about the genre it seems like a highly appealing game to fans of the old Castlevania games. And obviously it has Dark Souls fans such as myself intrigued, this is no surprise to me.

Salt and Sanctuary is currently available on PS4, and reportedly coming sometime for PC and Vita.

Tell the author of this post that he really should give the rants a rest and that he needs to relax on the whole Dark Souls phenomenon at xtal@tap-repeatedly.com.

4 Responses to Impressions: Salt and Sanctuary