I went to MomoCon last year on accident: I happened to be in the neighborhood, and followed a line of cosplayers to the event the way a hungry cartoon character floats on the scent of a cooling pie.

This year, I flew to Atlanta on purpose. I knew I had fun with my short time at the event the previous year. Critically, I wanted to attend the Devil May Cry panel at the con on Saturday, since the series evolved from a casual interest of mine into an obsession, at a pace that would give you whiplash.

This is a trip report.

The first full day of the con was Friday, and as I had a looser agenda, I began with a browse of the dealer room. In one sense, if you’ve been to one of these rooms, you’ve been to all of them, but I didn’t have a tight budget for this con so I figured I would shop if any items caught my eye. 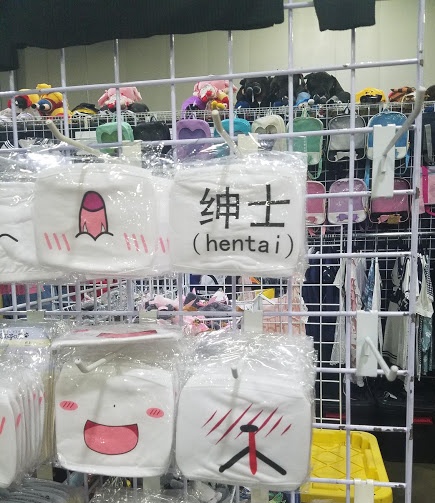 I had my DMC moment, which I did confess is the primary reason I was at this con. The panel for DMC was really just Dante motion capture artist and voice actor Reuben Langdon showing us behind the scenes footage he had collected on his laptop. It was hilarious. I waited in line for about two hours for an autograph, which is a much longer story. DMC cosplay was big at this event, and at one point I started counting the ratio of Dantes to Deadpools and it surprisingly ended in a tie.

I did some cosplay myself. In particular, I showed up with my Android 21 costume to the Dragon Ball Z Meetup photoshoot. It’s a very one-off thing for me to dress up as a DBZ character, but I love the character’s look. DBZ has such a fun and motivated fandom to hang out with. In spite of scorching in the sun and hating high heeled boots, I had a great time! 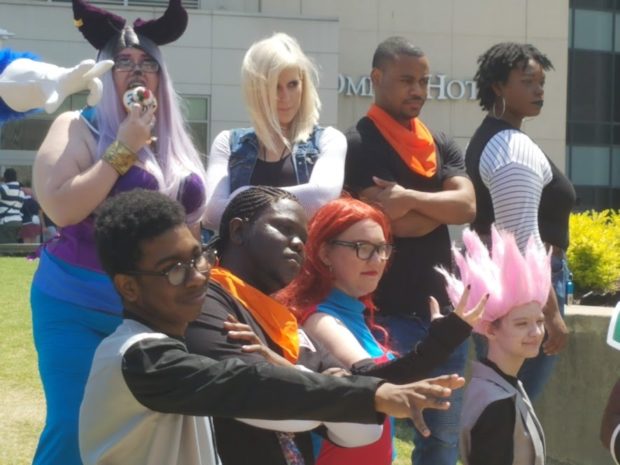 This con had indie games. There was even an award for them! Sad to confess, I didn’t spend a lot of time with them, though I did try one that didn’t grab me. Is it rude to namecheck a game that didn’t really grab me? I’ll skip doing that, just in case.

Indie developer Dan Salvato did a one-man panel on the making of his game, Doki Doki Literature Club. You’ve probably heard about this game, which uses anime visual novel tropes to create a meta horror title. It’s very much my kind of thing, and has been really popular among our local streaming community for its visuals and plot twists. But it’s not a game I’ve posted about here as far as I can remember. If for some reason you missed this one, it’s pretty interesting. It does hit a lot of buttons that other, older games have hit for me before, such as the meta gaming title Save the Date. Having attended the panel, it seems like this is largely coincidental on the part of the developer, since, a game that plays with the idea of knowing it’s a game isn’t exactly a new concept in game development. But the polish and cuteness on this title makes it sort of fun.

IntiCreates was at MomoCon. They were showing off some of their titles such as Azure Striker Gunvolt and – perhaps more critically – GalGun 2, a game where you shoot a love gun at squealing school girls. The gun’s purpose is to exorcise demons from the girls, but it does so in a matter that makes them make happy moaning noises, and also might coincidentally make their clothes all fly off. IntiCreates is 100% class like that. I do not say this to drag IntiCreates, but to praise them. We took pins and bought T-shirts.

Saturday evening, we attended Suda 51’s panel, which I guess is the only real gaming “news” I have to report and what makes this article qualify as news. One reason I was excited to go to Momo last year was to watch Suda’s panel, so I was pleased that he was back again. Suda used this panel to take a few audience questions, and mostly show some Directors Cut cutscene footage from Travis Strikes Again, the newest No More Heroes saga title. Which I am ashamed to say, I had plum forgotten to play! I was excited about it, then it came out and it slipped and I forgot to buy it. But the good news is that it’s coming out for PS4 and Steam this year, so now I will have no excuse. That’s probably a buy-and-stream title for me. I have to confess I don’t always end up clicking with the gameplay on Suda 51 titles (sometimes, I’m just plain bad at video games) but I always admire his creative imagination. 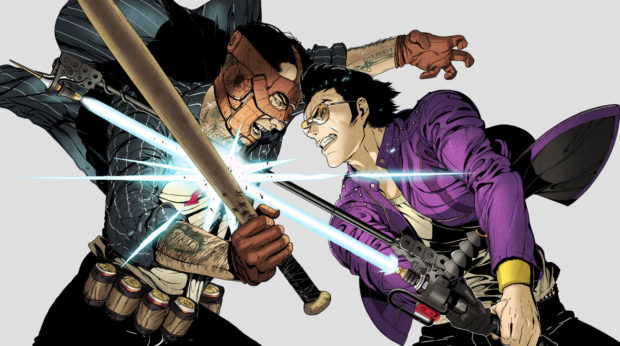 The previous year when I attended MomoCon I capped the visit by listening to Bit Brigade. They’re a band out of Athens, Georgia, but since they often show up at MAGfest and PAX I have seen them at other venues. Their act works like this: one member of the band plays a video game, with the music turned down. The rest of the band plays a rock and roll mix of that game’s music, live, while the player with the NES controller speedruns the game. It’s always an exciting show because I can hear my favorite music, and watch a skilled gamer at the same time. Last year at MomoCon, Bit Brigade played the Legend of Zelda. As spoiled as I am, I had already seen the LoZ run twice, so I wasn’t as invested as I could have been even though I enjoyed the show.

This year, they played a run I had never seen before and which was relatively new to their repertoire. This time, Bit Brigade played Mega Man 3. Since this is one of my favorite game soundtracks ever, and, I had already had a fantastic day, I’m forced to conclude that they did this just for me. 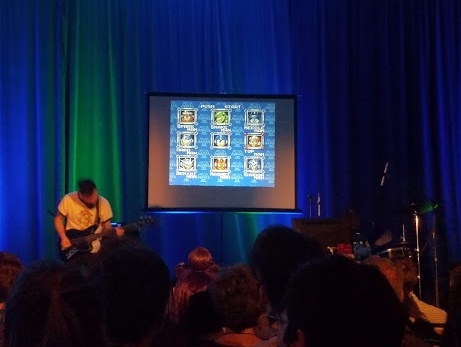