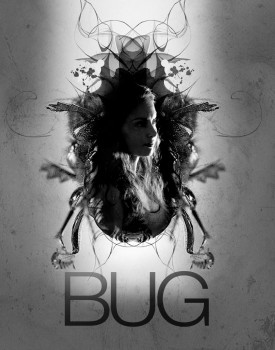 Bug
Directed by William Friedkin
From Lionsgate Films
Released May 2007

“…Ashley Judd frakking knocks it out of the park, turning in one of the best acting jobs in her career. She is a revelation, a cavalcade of dysfunction, a celebration of dissipation.”

I hate bugs. Whenever a nature documentary on insects comes on the TV I change the channel because I know for a fact that within seconds the bugs will be copulating, eating each other, eating other bugs, eating each other while copulating, or some variation of the above. Bugs are great for some things, like gardens, which are usually outside, which are where bugs should be and not in my TV set. So you can imagine my dismay when I first saw Billy Friedkin’s newest offering, Bug, on the rental shelf at my video rental store. All I could think was how low Ashely Judd had sunk, starring in a bug horror movie.

Fast forward a few months and I see a comment on The Onion’s The AV Club praising Friedkin’s Bug and especially the over-the-top performance by Ashely Judd. Curious, I rented the movie and watched it. Much to my surprise there was not a single insect to be seen…well except for a quick cut. This Bug was not a bug. And no this isn’t a spoiler but an inducement to watch this movie because it’s great and I bet no one is watching it because everyone thinks it’s filled with bugs, scene after scene of creepy, crawly, slithering, chittering, cannibalistic bugs. But it’s not.

It is about bugs though, all kinds of bugs, insectoid, and otherwise. Listening devices, corrupted programs, personality quirks, every kind of bug variant you can think of is in this movie. And Ashley Judd frakking knocks it out of the park, turning in one of the best acting jobs in her career. She is a revelation, a cavalcade of dysfunction, a celebration of dissipation. 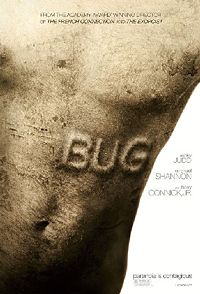 Honey, does that look like a bite to you?

Judd plays a down-on-her-luck bartender living in a run-down motel in the middle of nowhere in the southern US. She is paranoid, alcoholic, drug addicted and lonely. Really, really lonely as it turns out and prepared to do almost anything to become less so. She works at a lesbian bar and runs with a wild lipstick lesbian by the name of K.C., played by up-and-coming actress Lynn Collins. K.C. is a loving, caring friend and so naturally she brings Peter Evans, the world’s creepiest guy, over to Agnes’s room one night and leaves him there. Peter, played by Michael Shannon, mumbles, twitches, squints, launches into non sequitur after non sequitur, and knows much about many things, especially insects and secret CIA experiments. Soon after this odd couple hook up, Agnes’s ex, Jerry, fresh out of prison, shows up apparently just to menace everything that moves. Jerry, played by Harry Connick Jr., lumbers around like a heavily muscled predator in a room full of broken, damaged children. Jerry makes a big scene, then leaves for most of the movie. Weirdo Peter stays…and stays.. and stays.

Peter has a thing about bugs, seeing them everywhere and feeling them on and in him. Problem is, no one else can see them, just Peter. Being the good, giving, girlfriend she is, Agnes doesn’t let this bother her. Soon Agnes and Peter are deep in a folie a deux, a mad, delusional fantasy shared by two people in close proximity who are isolated from the rest of the world. Agnes and Peter spiral down, down, down in that motel room and it’s a harrowing journey indeed. Judd has an actor’s dream role here, taking a depressed, alienated character and turning her inside out for our viewing pleasure. My jaw was slack for much of the last two acts and especially for Judd’s see-it-to-believe-it, queen bug mama scene near the end. Michael Shannon, who also plays Peter in the stage version of Bug (from which the movie was adapted) matches her squint for squint, twitch for twitch.

Bug is based on a play by Tracy Letts, who also wrote the screenplay. The movie was shot near Mammoth, California and just outside of New Orleans, wrapping a few days before Katrina hit. It’s violent but not sloppy violent, bloody…well pretty bloody, has some nudity and adult language. If there was an Orb rating for “Orb would love this movie” I would give it one.