As I mentioned in my previous review, I just got back from PAX West 2018. Here’s a by no means complete list of games I played there and thought were interesting!

I’m not going to talk here about upcoming AAA releases like Kingdom Hearts 3 and Devil May Cry 5. (Though if you didn’t know that both of those games are coming out, they are!) Instead I’m just going to talk about small/indie games that caught my interest. Not only do I love indie games, but the lines to play them are a lot shorter, so you get more game in your day. Win/win! 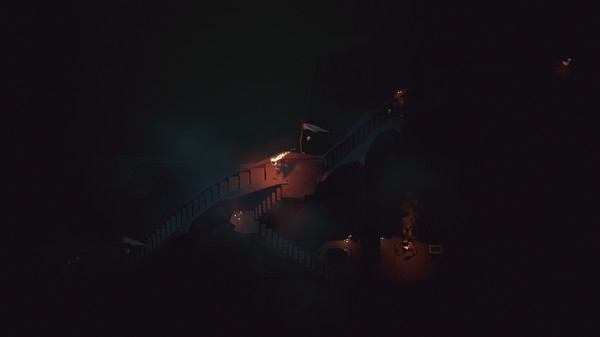 Below is a roguelike game with some limited world persistence. This is a genre I first learned about when playing one of my favorite little bargain bin games Shiren the Wanderer. This is a dynamic I really enjoy. There is permadeath, but still a sense that you might be able to make some progress for a future self. From the creators of Superbrothers: Sword and Sworcery EP, Below was put on hold for several years for additional polish passes, and seemed as if it was doomed to become vaporware. But as it’s reappeared now at PAX, it looks polished and near-ready.

It occurred to me digging through screenshots and photos of this game that I’m not exactly leading with the most visually interesting still here. The game looks a lot better in motion. But it’s also a game about dark and quiet, where traps can spring up anywhere and a lit torch is important survival gear. I ended up really digging the atmosphere in this title. 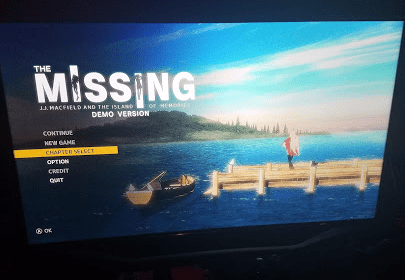 You already probably know that I am a huge fan of SWERY65, creator of Deadly Premonition and other weird, cool titles. Last year at PAX he announced The Good Life, a game which has now been successfully Kickstarted and is still in development. But this year he brought another title, The Missing: J.J Macfield and the Island of Memories, which, surprisingly to me is a 2D puzzle platformer!

Typically I wouldn’t match this developer with a puzzle platformer, but this one of course has a twist. In The Missing, you play an immortal character who has to die and recover herself to progress in the game. I’ve seen this concept before (it’s hard to innovate in the 2D platformer space entirely) but never quite executed in this way.

What sells The Missing is that the protagonist suffers gruesome death animations whenever she perishes. Each level has a different way to die or take damage, and both of the levels I tried were horrific. In one level, the character loses limbs, which break off messily. They then need to be used as levers, leaving your own arm and legs behind as you weigh down obstacles. You can then push a button to regenerate, and do the whole painful process over again. In another level, dying to a wrecking ball is the only way to reverse the level’s gravity. Sometimes brutally ragdolling is the only way to cross an otherwise impossible gap. I winced a lot figuring out the solutions to these puzzles.

The Missing comes out October 10! 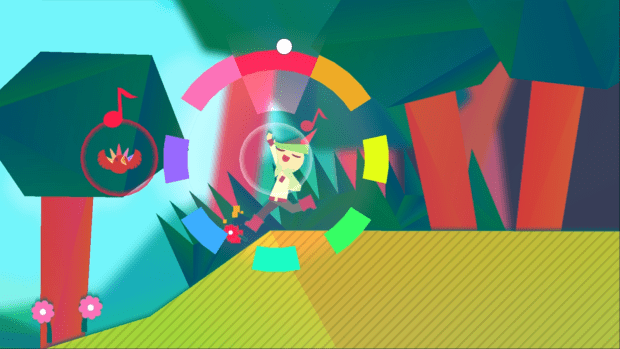 This is a bit of a cheat. I actually played this game at PAX last year! But it’s coming out Really Soon Now (September 27 on Steam) so I’ll just talk about it now!

Wandersong is a game created by Greg Lobanov. Greg used to be a member of the Philly indie scene until he got too big for our one-horse indie town and now he’s making a game on that’s coming to the Switch! Congratulations, dude!

In this game you are a bard who travels the world solving problems with song. The interaction is a radial menu that you use to indicate which note you’d like to sing. Singing certain notes solves puzzles and helps you along your quest. You can use song to grow plants, make friends with birds, or defeat ghosts. It’s colorful and super cute and I’m excited to play when it releases! 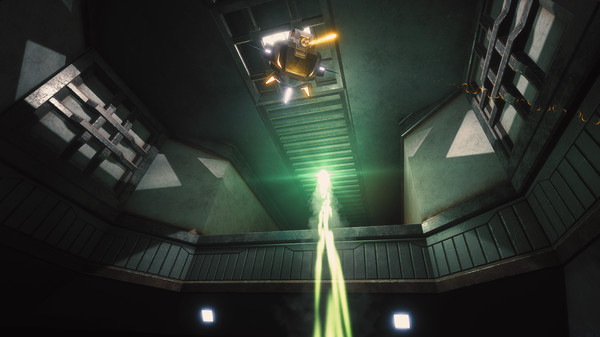 Overload has been out for a little while, on PC anyway (coming soon to consoles). I saw it at PAX because it was featured as part of this year’s PAX 10. I don’t know how it slipped under my radar, but I’m glad I found out about it now.

Overload is a spiritual successor to the shooter Descent, and it’s compatible with Oculus Rift. This, I have to say, is the game I wanted on Oculus. If it didn’t exist, I would’ve probably eventually tried to make it myself. But who has the time? This game is actually made by some of the original creative team behind Descent or its sequels. It’s a retro shooter with a classic feel. The ship controls allow you to spin in any direction, constantly twisting and turning through maze-like tunnels… because in space, who can say which way is up?

I’m hyped to slap on a headset, blast some robots, and hopefully not lose my lunch. 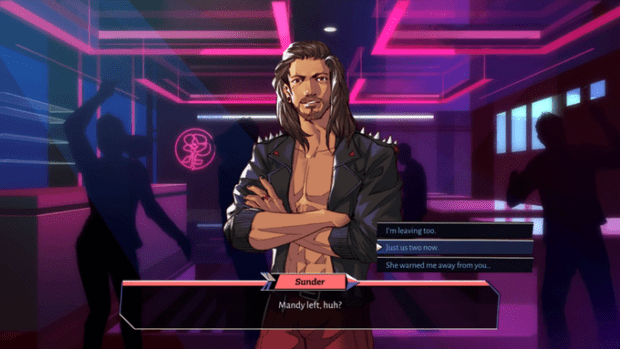 Boyfriend Dungeon is an interesting game hybrid: a dungeon crawler/roguelike combined with a dating sim. Each weapon in the game can also transform into a person, and you periodically have to go on dates with your favorite (or favorites) to increase your synergy. I’ve seen other RPGs with weapon upgrade mechanics of course, but this one makes the whole process quite personal. I think the nearest analogue I’ve checked out recently is Xenoblade Chronicles 2 (which I’m playing on my Twitch stream lately!) where the player fights alongside a companion. But in Boyfriend Dungeon, your companion literally transforms into your weapon, sometimes complete with Magical-Girl-inspired transformation sequences.

I wanted to be excited about this game. I like boyfriends and dungeons. But I have to admit I walked away feeling a little unsure about it. The bottom line is I don’t know if any of the romance interests are my type yet. The “What weapon should I date” quiz matched me up with the Epee. Maybe? I’d have to see.

Toejam & Earl: Back in the Groove 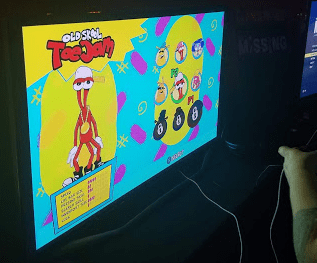 Wow, I played a lot of roguelikes this year! Toejam & Earl is a roguelike! Toejam is a Wiener.

If you’ve never played T&E then you may not even be aware it was an early console roguelike. (I had the realization recently that it’s what happens if you made a roguelike remake of the Atari megahit E.T. At least, the premise is close to the same: you’re aliens looking for busted parts of your equipment, and along the way you fall into a lot of holes.)  I have some fond nostalgia for it, and I’m a backer on this new version. Toejam & Earl: Back in the Groove was delayed for a while, but it also seems to be close to release in this current form. And what this form is, is… well, it’s basically a lot like the original game, with more characters, an online play option, more balancing options, and slightly but not overly updated graphics. It seems like it’s about the game I hoped it would be, and I’m good with that. 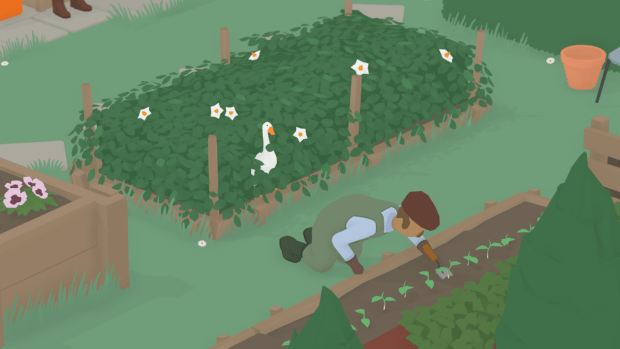 The line for Untitled Goose Game was the longest line I waited in for an indie game (in my defense, the line seemed shorter than it was). Also their booth was really cute (shared with Firewatch). 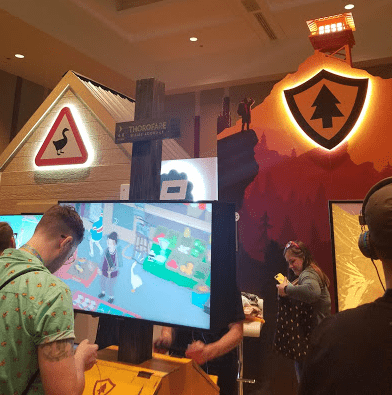 This game was announced to much celebration with what seemed like a working title, but it was never given any other one. It’s officially named Untitled Goose Game (as opposed to more obvious puns like The Goose is Loose). The game plays like a combination of puzzle/stealth game. You play as the untitular goose. The goose has a set of goals that he wants to accomplish, all of which happen to involve being a jerk and irritating the crap out of people. For example, my first goal is to get into the garden, in spite of the gardener’s wishes otherwise. Then I have to drop the gardener’s rake in the lake. That bit of mischief done, it’s crossed off my “to do” list. Being a jerk in a game is so much fun. And honestly, the gardener had it coming.

Get in the Car, Loser! 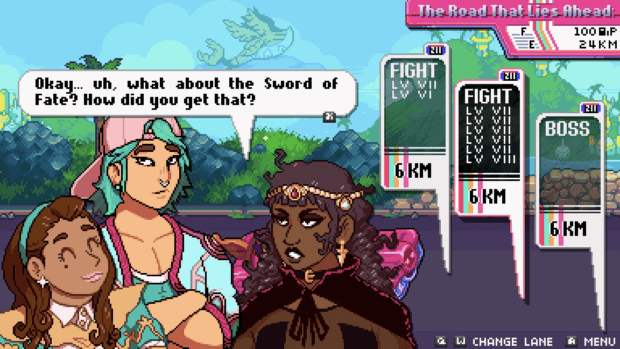 It’s Christine Love and she’s making an RPG and I dunno, nuff said?

This is a road trip RPG starring some stylish girls and non-binary persons on a cross-country drive to defeat the Machine Devil using the Sword of Fate. It features stylish pastel graphics combined with snappy writing, and a combat system focused on teamwork and synergy between party members. So far I am the most charmed by Grace, the wielder of the all important sword, because she’s an A student and a bitch queen just like me!

Get In the Car, Loser at Love Conquers All Games 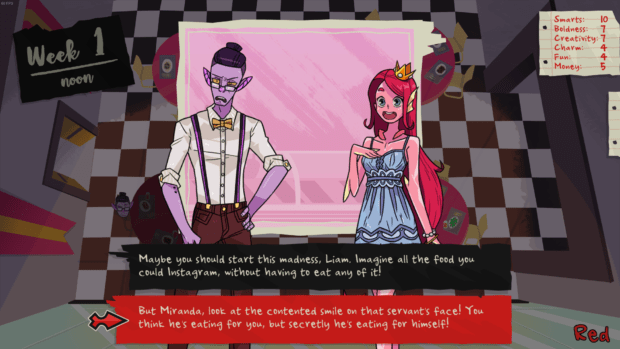 Monster Prom is a multiplayer dating sim full of mean spirited humor and quirky characters. The game has actually been out for a while, but it was at PAX partially to promote new DLC coming soon that will add new situations and characters. I also attended a panel by the creator discussing the design philosophy and humor of this game, and even saw some fabulous cosplayers!

Monster Prom is a little different from some dating sims, as it plays out a bit like a board game. Any game is short, with a single player game taking usually no longer than an hour. However, it allows up to four players, competing for the chance to take a monster to prom. You can all go for different dates, or try to snipe someone else’s (sea monster, ghost, demon… they’re all pretty fun in their own way, and the characters all have a little depth). I’ve played it on my stream off and on, but for some reason I have yet to convince anyone to jump in with me on the multiplayer mode. It’s hilarious and honestly I don’t know why you aren’t all playing it with me right now.

That’s all I’ve got for you right now, both serious and silly. Hope you enjoyed and maybe you saw something that might pique your interest!

You can email the author of this post at aj@Tap-Repeatedly.com. All the pictures here are either official press screenshots, or my photos from PAX.