A trillion years ago, when my brother Marcus published his third novel Good People, a mutual friend reached out, not to congratulate him, but to warn me.

“Have you noticed that a younger brother dies in every book so far?” Vezner asked. “I think whatever he has planned for you, it’s coming closer. I’ve prepared this helpful infographic to illustrate my point.”

I found this infographic again the other day, while cleaning out my office to paint, and it still sends a chill down my spine.

It shocked me when I beheld it back then, too, of course. I’d never seen it drawn out, you see. I’m a visual person. So when Vezner took pen to paper and faxed (!) it to me, it was like learning a long-held truth for the first time. Marcus writes — well, wrote, he’s more esoteric now — Marcus wrote crime thrillers. As his career progressed he discovered a hidden talent for inventing terrible things to do to his characters (my favorite line from his novels is, to this day, from his fourth book The Amateurs: “Piss me off I’ll go to work on your father with a ball gag and a belt sander.”)

So I guess Dad probably should be a little worried too. 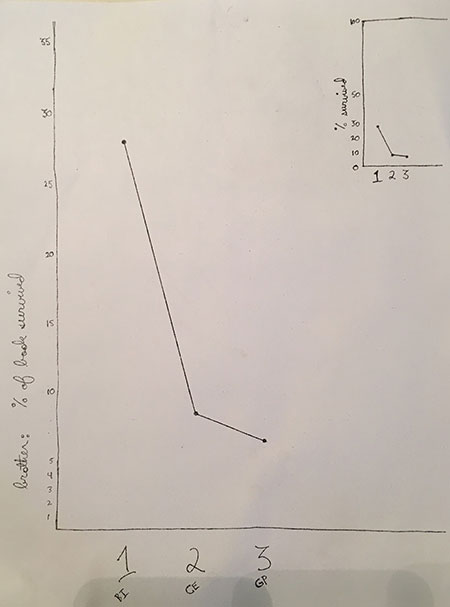 Yes, you’re interpreting Vezner’s graph correctly. The villain’s younger brother died on page four in Good People, down from page eight in Accelerant and a whopping it-was-awesome-growing-up-with-you-and-all page 29 in The Blade Itself.

His voice kept getting squeakier and more protest-y the harder I pressed the issue. “I’m just exorcising my worst fears!” he cried.

Vezner’s concern was that most books start at Page One, and there are very few pages between Page Four and Page One. “The question is what’s going to happen in the next book,” he said. “That’s what I want to know. He can’t kill a character before the book starts, right? Which means logically he’ll come out of the book, like that little girl came out of the well in The Ring. Marcus is going to come out of a book and kill you.”

Sensing a threat to his plan, Marcus retaliated by closing his curtain of hair over his face and retreating back into his basement office just like the little girl did. We saw him lurking down there, just a pair of luminous eyes down at the bottom of the stairs. He knew he’d be blamed if anything happened to me. So he crept to his Typewriter of Woe and cranked out five more novels that had plenty of violence, but no younger-brother-or-brotherlike-figure deaths.

WELL YOU WERE WRONG, DAVEIGH CHASE.

So here we are in 2017 with Book Nine, a novel ominously titled Afterlife.

It’s about death. The whole book is about dead people. People who have died! And do any of those younger brother-or-brotherlike figures appear in this mysterious purgatorial waiting room he has worldcrafted in this, his latest and most intriguing literary adventure? I mean, it’s the afterlife, right? Where dead people go. Like all the dead people he killed pretending they were me. But none of them show up in Afterlife!

Several years ago Marcus took a few months to write a screenplay with a buddy of his, novelist Sean Chercover. They wanted to see if they could work together and make some of that sweet, sweet Blake Crouch money. They had fun doing it but decided to stick with what they knew, which, it transpires, is murdering me. Because guess what? I’ll give you four pages to guess what sort of younger individual or individual-like character dies in that movie.

I thought Sean was my friend, too. Man, learning the truth about people is harsh.

Still, it is my responsibility to alert all and sundry to the arrival of Afterlife on this day, July 18th. As usual you can enjoy it in paper form, perhaps using it to bludgeon a sibling with; or if you’re a modern major general you can get it for your Kindle, then read it, then hurl the Kindle into the tub while your sibling is in there and fry him or her like a green tomato.

Marcus’s Brilliance trilogy, his last three books, were a departure from the brother-murderin’ ways of his early thrillers, and Afterlife is even more creatively textured. Early press is great, I guess they’re already making it into a movie, nobody’s offered me a cameo, and Marcus owns a yacht. I don’t own a yacht. I lease a Chevy Cruze.

The strain of waiting to die, book after book, while he bided his time, has gotten almost unbearable in the past few years. I won’t tell you whether I suffer a dark fate in Afterlife (you might think no, since everybody’s already dead, but Marcus’s Afterlife is sort of the Dark Souls of heist-plus-love stories in a post-animate world. You can just die and die and die and die and die and die and die). Telling you would be a spoiler. And I don’t want to spoil a story that The Huffington Post exuberantly declared “Not a safe book,” (that’s for fucking sure, for me at least) before going on to gush that most people would want to finish it in a single sitting (this is theoretically possible too, since Marcus writes fewer words than I do to say the same thing, and these days writes them much more reliably).

Join me in congratulating the Murderous Marcus on his ninth — can you believe it? Nine! His books are nearly a tween — soon-to-be-bestseller.

Then go buy it! I’ve funneled all your clicks through my private Tap-Repeatedly Swiss Amazon Bank Account, so if everybody pitches in I’ll soon have tens of dollars.

Obliquely imply that Steerpike could have done more with his life at Steerpike@Tap-Repeatedly.com.