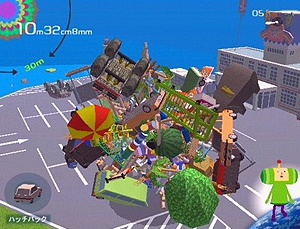 I think my keys are in that mess.

Last week, the San Francisco Chronicle’s Playing Games column listed their nine Most Bizarre Video Games of All Time. To limit the list, the authors decided to concentrate on titles that were “actually kind of fun to play” and exclude licensed titles. (I’ve included my impressions for the games that I’ve played.):

I’m crushed that the authors didn’t include Chulip, which for me, is my number one most bizarre game. Evah! I mean, your sole goal is to kiss everyone in town – and I do mean everyone, including the crazy people living beneath the city – so that you can eventually kiss the girl of your dreams.

What’s your most bizarre game?

8 Responses to It’s a Bizarre World After All