I don’t want to bury the lede, so, if you read and reply to this article, you might win a small prize! Details below!

Over the next few articles I’m writing some recaps about my trip to PAX West in Seattle. While I was at the show I did the usual activities: played games, chatted with developers, and did a little cosplay. I also did something I had never done before at PAX, which is wait in line for several hours to watch other people play Dungeons & Dragons. And I also played a game which is in part about watching people play Dungeons & Dragons.

Let me talk first about the last thing I mentioned: Idle Champions of the Forgotten Realms, a game I’ve been playing for the last few weeks. I found out about the game during the Stream of Annihilation event, where it was in closed alpha. It’s now an Early Access free to play game that anyone can check out on Steam. 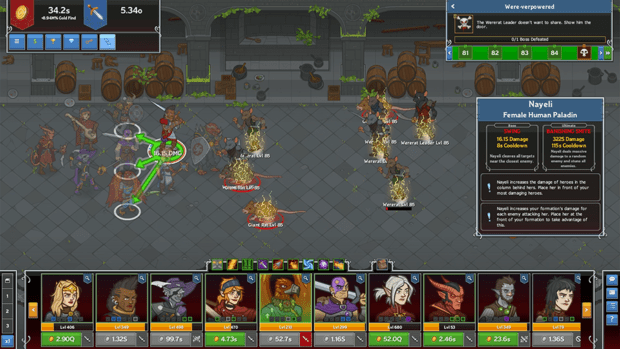 I’m bundling this in with an article about Dungeons & Dragons’ spectator sport qualities because, as the title might suggest, Idle Champions is an idle game. Idle Champions involves a lot of light clicking, and is mainly designed to run in the background while you do other things. I have so far not played this game for about 12 hours. It’s not a game I’d say is difficult, but it is a thing you can do when you are also doing something else such as chatting on Facebook or waiting for code to compile.

If you aren’t familiar with this type of game at all, it’s easy enough to pick up. Each play session starts with a single low level hero, killing monsters to earn coins. You can click on monsters yourself, too, but the hero is much better at killing them than you are with your clicks. As you play you earn coins, which you can spend on hiring new heroes and leveling up existing heroes.  The characters level up and they take on heavier monsters and then you earn more coins. It’s basically just fun to watch numbers go up, and see what will be around the corner.

If I had any complaint about the game, it could probably use a little more content before its full release. The game gets some mileage out of re-using assets by creating challenge levels, which are the same levels one just played but with some additional challenge modifier. Early on, this is guarding a caravan. This adds challenge by preventing a more optimal party formation, as positioning of your hero units matters. But it also adds challenge to my patience by forcing me to do Dungeons & Dragons Standard Low Level Activity #5: Guarding a Caravan. Even The Adventure Zone guarded a caravan.

Here is the prize I promised earlier – if you happen to be interested in the game and want to get a code for a gold treasure chest, reply to this article and the nice people at Codename Entertainment might send you one! I don’t have any official limitations on this, so I’ll say the first five people to speak up might get a code. Post your comments below if you’re interested!

Let me now talk about the other thing I alluded to: the phenomenon of Dungeons & Dragons in general as a game one watches just as often as a game that one plays. We’ve been streaming our own home game for the last two months now. Even though we don’t draw more than a dozen or so in audience on most days, I think streaming the game has been a blast. 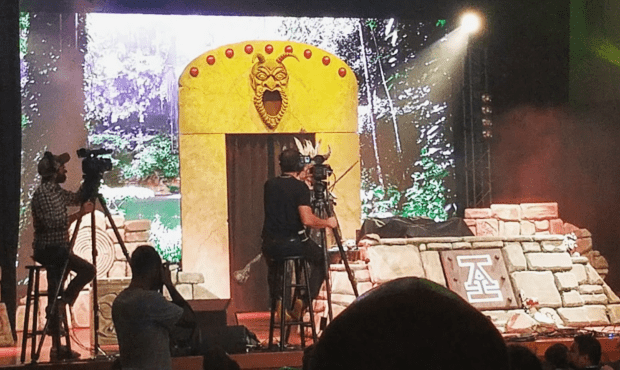 Once I wrote about how I felt the future of D&D was uncertain. I’m really happy now to report that one of my all-time favorite games is more celebrated than ever before. I couldn’t have predicted the direction this actually took. This revival has been spurred on not just by the new edition material, but by live game streaming, game podcasts, and roleplaying shows on YouTube. Dungeons & Dragons has become not just a game you play, but a type of improv community theater.

I mentioned that I waited more than two hours to watch other people play Dungeons & Dragons. I don’t regret the wait. This is part of the ongoing D&D series Acquisitions Inc., which stars Those Guys from Penny Arcade, Dungeon Master Chris Perkins, author Patrick Rothfuss, and this episode, Holly Conrad as Strix the Trash Witch. The actual video is online, so you can get some idea of what this spectacle is like. Viewed live, it’s a great time, with people laughing at every in-character jibe, reciting favorite catch-phrases, and cheering at every Natural 20.

Thanks to new technologies, I think we have a generation of D&D fans that watch the game more often than they play it. I mentioned earlier the podcast The Adventure Zone, which has an enormous fanbase. Another friend of mine learned about D&D from watching Critical Role, which is now a comic series. When people learn about D&D first by watching “the pros” play it, they understand the iconography of things like the “Nautral 20” as a cultural meme without really having first hand experience or knowing all the intricate rules. I’m not saying this is a bad thing at all, but it’s different! Lots of us 90s kids learned about Dungeons & Dragons from the related novels, or cartoon shows, or tie-in board games, before we learned about this game that you could play. Watching people live play D&D and following their stories puts equal emphasis on the game and the process of playing it than just the story that comes out the other end. 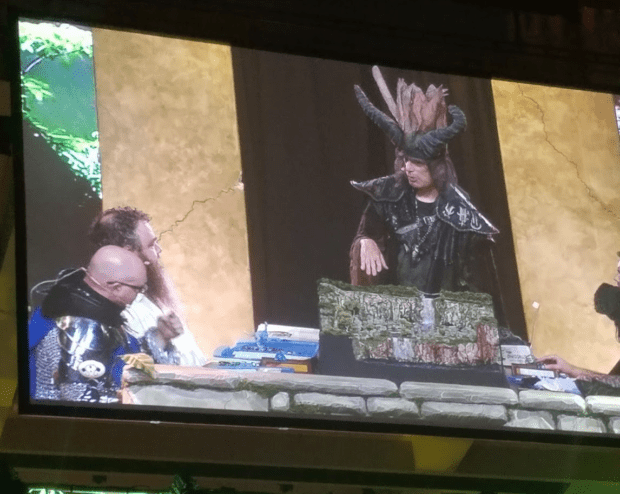 But, the old woman in me, who resists change, does have a question: is this really making the game accessible? Or is it making it into something that only the best people actually do while the rest of us sit in the audience? Do people who have never played D&D walk away from an Acq. Inc. episode thinking they’d like to play D&D at home? Or do they walk away thinking that they’ll never live up to that game’s lofty standard?

I particularly wonder about this where it comes to female gamers. While it’s fantastic to see lots more women on stage during these presentations, there’s an emphasis on models and actresses playing because they look great on camera. There’s a part of me, a small part, that wonders if I’m not cool enough to play D&D anymore. And if I don’t feel cool enough, I wonder if young women out there feel cool enough. I don’t have any easy answers here. That’s why I think it’s just as important to keep on playing…

In spite of the emphasis that PAX placed on the Acq. Inc. group, there wasn’t organized play of D&D at PAX itself.

But don’t worry, I still played it, thanks to a few likeminded folks who snuck out on the final day of PAX to game in a quiet conference room. We played out a short adventure where we fought a necromancer, and Rooster Teeth artist Luke McKay even drew a cool sketch of our party! 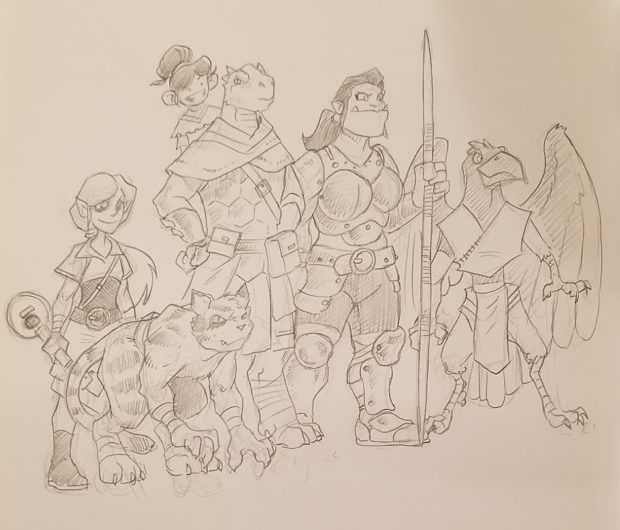 When I initially wrote about 5th Edition, I wondered how the D&D brand would work with D&D’s long history of published settings. At the time I made the assumption that all the classical D&D settings I grew up with were still going to be used in official material. It was a fair assumption to make, considering the 5th Edition Player’s Handbook mentions several classic settings including Greyhawk, Forgotten Realms, and my personal favorite, Dragonlance. However, most official setting material that’s been released by Wizards of the Coast for 5th Edition is Forgotten Realms flavored. This includes the new adventure series, Tomb of Annihilation, which takes place on the Faerun island of Chult.

Tomb of Annihilation contains a lot of references to the classic module Tomb of Horrors, but it is not Tomb of Horrors. Any purist would automatically balk at this. Tomb of Horrors is a Gygax module, and it would be properly set in Greyhawk, so what are references to it doing in some completely different world? ToA contains some extra-dimensional handwaivy bits to justify this to purists. Newcomers probably don’t care too much about the difference, since it’s got that D&D flavor.

Because of the official push for Tomb of Annihilation it seems like every famous streaming group is currently playing the same setting and module. That is kind of a downside of the current Dungeons & Dragons scene, where all “official play” including Adventurer’s League is locked into Chult and the Chult-adjacent story. That includes our home group, too, since I got a review copy of the module. I think we do put our own spin on the things that we do, though, as I always do. Overall, I’m really excited to be getting back into D&D again and be part of a growing movement.

You can watch me and my friends on Twitch playing Tomb of Annihilation on our Dungeons & Dragons & Chicken show, running mostly every other Sunday. Our next session is this Sunday, September 25! We have some other things planned including live streaming from the Ren Faire, but we don’t stream every week. We’re just regular gamers having fun and we hope it’s fun to watch too.

You can email the author of this post at aj@Tap-Repeatedly.com.