Hi everyone! Welcome back to Local Flavor!

I’m taking another broad interpretation of local and traveled to the opposite side of the state, to Pittsburgh, PA and the Schell Games studio. I have a history with this studio as I spent about six months working with the company last year. I was eager to check out their brand new space in Pittsburgh’s Station Square, and talk to the team behind one of their releases this year, Enemy Mind. Photos and interviews below! 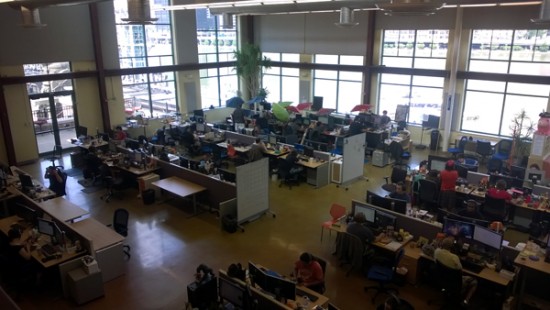 I’ve previously posted my impressions of Enemy Mind, which is available now in its final version on Steam. Enemy Mind was a GDC and PAX East indie game selection for Schell Games. The game is a cleverly designed space shoot-em-up, where the player plays not any particular ship, but a psychic entity that can travel from ship to ship. As the game progresses, the player has to keep shifting ships to survive, since not only can ships be damaged, they can also run out of ammunition. Being forced to switch ships keeps the game lively and the play constantly changing, whether with four players or just one.

The game was conceptualized during a company-wide game jam, where different designers prototyped ideas that they’d like to make. Mike Traficante, a programmer at Schell, came up with the idea to develop Enemy Mind based on a dream that he had. The game was prototyped during the internal jam, then was then greenlit by the company for full production. The final version of the game has design work from Connor Fallon, art by Evan Brown, level design from Yotam Haimberg, technical art from Dan Lin, UI by Matt Kucic, writing from Mike Grinti, and was produced by Dani Belko. I was lucky enough to talk to all of them about their process and learn some of the weird, coolest secrets about the development of Enemy Mind…

“What are you most proud of in this game?” I asked. Mike T says it’s the game’s balance. People will always say what their favorite ship is in the game, but it’s not always the same ship. No ship seems too overpowered compared to others and it’s really a matter of individual playstyle. He also likes that it’s not a bullet hell style game like many modern shoot ‘em ups. “It’s all about being clever and strategic… more like a puzzle game than a shooter.”

The game does play differently now than the original prototype, though the playable prototype is still accessible from a bonus menu on the final release. One big change is the game’s bosses, which you can also battle during a Boss Rush mode. The Gamasutra article here details the creation of the bosses and the biggest challenges of the game from designer Connor’s perspective. I asked Mike and Connor: what were your favorite bosses in the game? Connor says his favorite boss is the Goliath, the big multipart megaship. Mike T said, though, that his favorite boss is the final boss. Going into details would be an endgame spoiler, but he said that what makes him happiest about this boss is how well it works at surprising the players. In Let’s Plays of the game, it’s always a big hit. 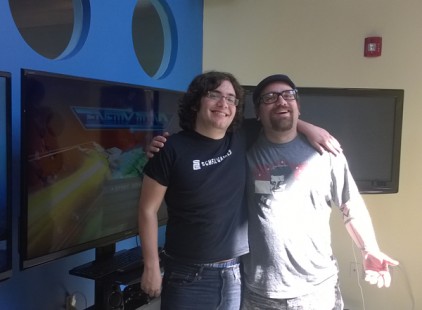 Connor Fallon (L) and Mike Traficante (R) pose with their game on the big screen.

In Boss Rush mode, the player can only face bosses they have already faced, so there are no story spoilers. I spoke briefly to Mike Grinti about his take on the story, and he didn’t want to give away the secrets, but he did mention that there was a certain challenge to writing this game’s story. The text budget was limited, and he needed to balance a sense of mystery against being outright confusing. The end result of the story is, as he puts it, a “lot more like poetry.”

I did learn something very special about the story of Enemy Mind during this interview, and that will include some spoilers in this paragraph only… The game has three endings, which are dependent on which faction’s ship the player uses the most. The two main factions of Human and Aratus are easy enough to understand, but getting the semi-secret third ending is a real challenge. It’s totally possible, but incredibly difficult, to get that final bonus ending. I got one other tip from the developers, too: the secret ending is different if you manage to get it a second time. 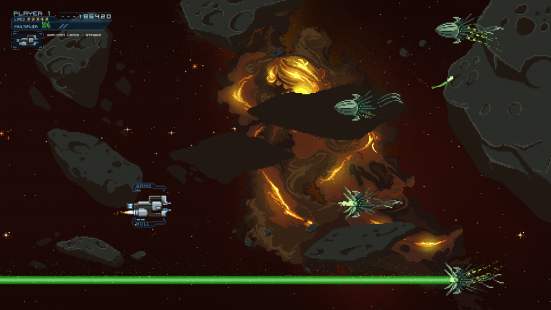 Other bonus modes that the game shipped with were suggested as jokes by the development team. Mike T came up with the idea during development to create a Flappy Bird clone using the game’s assets. On April Fools’ Day, studio head Jesse Schell dared him to switch the Steam version of the game to this clone. That version of the game, “Flappity Mind” is still on the game’s bonus mode selection… as well as another silly mode called Rock Simulator where the only ship is a meteor. The meteor is a “ship” that’s actually in the main game. It was surprising and funny to lots of players that they could possess a meteor – which caused them to lose control of their game as the rock just aimlessly drifted until they could swap to a real ship. So the designers thought it would be fun to create an invincible meteor mode where the meteor was the only available ship in the game. In Rock Simulator mode, players have no control at all, though you can still sort of decide which ship you “are” and see how many points it scores in its aimless bumbling, which can be a fun party game in its own way.

I also asked the team some questions about the game’s soundtrack. The music was written by chiptunes artist Rainbow Kitten working with only the real Commodore 64 sounds for music. As for all of the digitized voice in the game: it’s literally a Speak ‘N’ Spell, which the developers bought off of Ebay. The process for creating every word in the game consisted of finding ‘like’ words on the Speak ‘N’ Spell, recording those words, then chopping them up to get the right sound to fit the game. It was actually a lot of work to get things right. For example, even a simple word like “Human” actually takes the “man” sound from “woman” to sound correct. Tricky words like “Aratus” took up to an hour just to get right. The effort paid off though, since the Speak ‘N’ Spell voice is a perfect fit for the retro feel of the rest of the game’s sound.

So what’s next for Team Enemy Mind? They kind of chuckled, as right now they are back to working on licensed kids’ games. The Daniel Tiger series of web games is made at Schell Games, and the team is very proud to say that they believe they create the best games out there for the age-three gamer crowd. Little kids need to have fun too, so that’s worthwhile in my book.

Finished with Enemy Mind? The biggest challenge at the end of the game’s credits leaves players to face off with the Schell Games Logo, the game’s most difficult, nigh-undefeatable boss. Schell Games is celebrating its 12th anniversary as a game studio this week. Whatever they end up making next, I think it will be great!

You can check out Enemy Mind right now on Steam, or, if you want to support chiptunes music, there is a Kickstarter now live for a new Rainbow Kitten album. Also check out Schell Games on Twitch TV where they are playing indie games often to support other indie developers!  The stream typically runs on Thursdays, 12:30 PM Eastern Time.

Congratulations to Schell Games on their anniversary and thanks for letting me stop by!