I chat with the developers on the floor. “Everyone says this is either the most ridiculous game they’ve ever seen, or the most brilliant.”

I told them: this should be the final round of the Omegathon.

After Indiecade East I felt compelled to write about Hokra. My feeling is that while Hokra is simple and it’s great, it’s got accessibility problems that will prevent much wide exposure.

Divekick feels like a solution. Like the Sportsfriends games, it is designed for local multiplayer. The game, on release will be available, on PC, PS3, or Playstation Vita. That’s two players using a single computer or (perhaps absurdly) a single Vita. 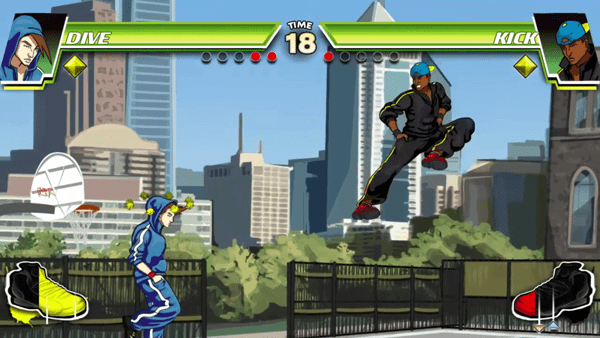 Divekick isn’t entirely unique. It takes the form of a fighting game. I’ve played a lot of fighting games myself because I love the bold character designs and crazy moves. But I’ve never really played at a high level. Earlier on the same day I walked up to a Darkstalkers booth and was rightly schooled by someone with more experience.  But I’m passing good at Divekick because there’s so little to know and learn. What one must learn is mostly in the minds of the opponent.

Each character in Divekick has a health bar, but it doesn’t matter. Get kicked once, and get knocked out. The game is first to five KOs. Rounds are short and brutal. There are a couple of other, small mechanics – kick your opponent in the head, and they’ll be dizzy next round which makes them slower. Win four rounds in a row, and a “fraud detector” kicks in that handicaps you slightly. There’s a meter to fill, and if you fill the meter divekicking is a little faster. All of this is just a way to divekick the other guy before he divekicks you. 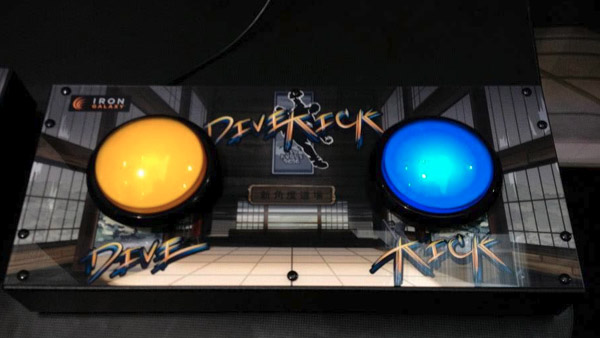 Divekick has only two buttons: Dive, and Kick. There is no D-pad: that’s important. With a D-pad there might be some pressure to do a half-circle on the D-pad to unleash some kind of special attack, or a 360 for a super-throw, or to push forward in order to parry or back in order to block. So, no. In Divekick there is only Dive and Kick. Press Dive to jump; press Kick to Kick. Press kick before diving and you can jump backward.

The main characters of the game are seriously named Dive and Kick.

There’s a few other characters, parodies of characters from other fighting games. A familiar-looking young lady named Kung Pao. A literal wolverine. The main reason the game hasn’t been released yet is the team is adding and balancing other unannounced characters.

I’m “a gamer,” so I don’t know for sure if the concept of a fighting game is immediately intuitive to non-gamers. But, I really suspect that it is. It’s just two characters, fighting each other, and it’s not hard to tell who is who. The only thing that might initially confuse a spectator is how to see who has won the most rounds, since the health bar in Divekick has no actual purpose. Aside from that it’s pretty easy to understand the impact when someone is kicked.

So One True Game Studios appeared, and, in the name of just kidding around, they made a very accessible fighting game.

And that’s no joke.

7 Responses to Do You Divekick?