Hokra is one of the SportsFriends games, a local multiplayer game funded by a joint Kickstarter. It’s like a very stripped-down digital soccer game. It’s a four-player game, two players on each team playing keepaway with a with a square pixel ball. It’s basic but holds surprising depth for high-level players. It’s hard not to get enthusiastic and cheer, watching every pass, every tackle and upset and score. 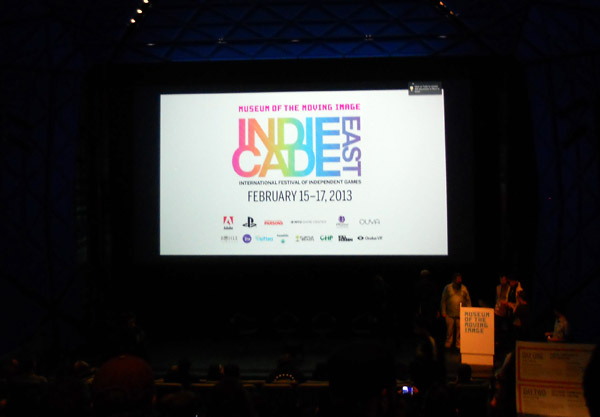 Sitting down at a big table in a pub with some likeminded folk. The topic drifts around a lot, but, at some point, we’re talking about eSports. I like to watch people play Street Fighter sometimes. I’m not a high level player, but I understand what’s going on at the high level and the commentary makes sense to me. My friend Zenas can’t watch Street Fighter that way. He likes to watch Starcraft, because he plays it, and so he understands it. I can’t watch Starcraft. It’s all just blurs to me with bright lights and words and no meaning.

Hokra at least doesn’t seem to have that problem.

After going into Manhattan to connect with another friend, I’m standing in a bar on 2nd Avenue. Far on the other side of the city from the IndieCade Expo, and long after it’s closed, people are playing a game.

The game is Beer Pong. 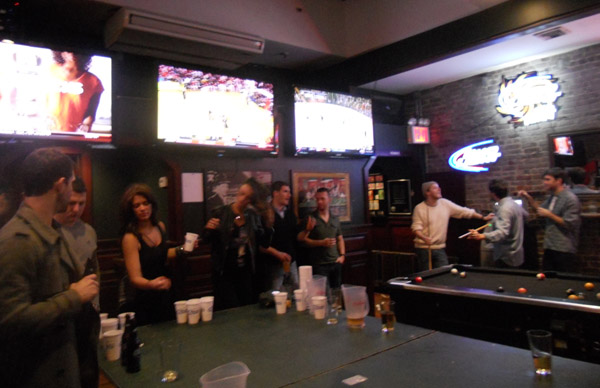 I’ve never actually played Beer Pong, and I didn’t play it this weekend either. I just watched. But the rules are really simple for a spectator to figure out. Players set up plastic cups on either side of a ping pong table. They’re in a triangle formation, like racked pool balls or bowling pins. Each cup contains about a shot’s worth of cheap beer. Players take turns throwing ping pong balls into the cups across the table. When the ball goes into a cup, the player near the cup has to drink the beer, and discard the cup. The variation we were watching was two teams of two players each. Like Hokra.

By most objective measures, Beer Pong is actually kind of a dumb game. There’s not much to it, very little depth of strategy, just a ball to throw and some cups to drink. The beer isn’t even good.

I got to thinking about Battleshots: that’s Battleship, with shot glasses instead of ship pegs. It’s a pretty simple idea for a drinking game, and I’ve seen it referred to many times as “the new beer pong.” But no one could really play Battleshots in a crowded bar space like this. Bars at night are loud. You couldn’t hear someone shouting “B2” over the deafening roar. You don’t need to hear for Beer Pong.

I thought about people playing Hokra here. It could work. But the drinking would of course be extraneous. And there is the issue of teams. When it’s loud, and you’re spectating, you can’t know who is on which team; there’s no indicator of that. It’s immediately clear who is on which team in Beer Pong.

I was a backer on SportsFriends, the Kickstarter that included Hokra along with other multiplayer games. But at the time, some were commenting on the awkwardness of their sales pitch, a sales pitch that I admit almost didn’t work on me, me, as a person who actually enjoys expo games. On Electron Dance I commented that I didn’t really feel like I was buying these games for me. I don’t think I have the hardware to actually play a single one of them. Putting aside the PS Move requirement for JS Joust, I also don’t have the four XBox controllers needed to properly play Hokra.

Kevin and Margaret didn’t either. They mentioned in their talk that when they were first learning the game – drilling it, really – they substituted two Guitar Hero controllers as their opponents.

I have three XBox 360 controllers if you count my fightpad. I guess I could ask a friend to bring another. I’m not sure how we would hook them all up to my PC’s two available USB ports. I try to Google how I might accomplish this with a string like “hooking up four controllers for Hokra on PC.” The first hit is Electron Dance again, The Hokra Problem. Which is a great examination of the problems with having such games on a personal computer, a box not usually associated with that kind of experience.

Expo games are fabulous in the atmosphere of an expo. I’ve already determined for several reasons they would not be fabulous in my home. Not just because of the problem of the context of the PC, but for other reasons such as lack of available space or hardware. Maybe the games would be fabulous in your home, depending on your setup.

But would they be fabulous in a bar? 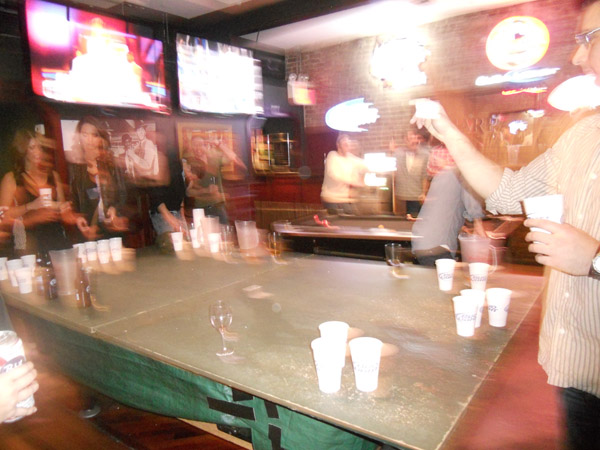 Hokra and games like it scratch an itch that isn’t scratched by singleplayer home games, or multiplayer games played online, “alone with others.” They’re a bit more inviting to crowds and participation than a round or two of Street Fighter is, and designed to be more comprehensible for the audience.

But does Hokra scratch an itch that isn’t scratched by Beer Pong?

On the way to the Expo my husband and I were talking about Monopoly. Monopoly changes one piece in its set, and it’s national news. Monopoly is played all around the world, and in America at least it’s a household name. Monopoly is not really a great game in a lot of ways. Even if it were, most people who play it alter its rules for the worse without realizing it.

I could go into people’s houses and try to explain this to them. I could drop on their tables a dozen or so board games are are empirically “better,” sometimes by orders of magnitude. I could say “look, you are playing Monopoly wrong, which is why it always makes you miserable, I’m educated and I know these things, stop it, STOP HAVING THE WRONG FUN GUYS.” I could imagine that this would open up their horizons and improve their lives and experience but in reality I believe it would make me a snob.

So a game developer walks into a bar. And says, “hey, I have this really great experience for you. It just requires four XBox 360 controllers and a PC and a big enough screen. And would it kill you to drink some decent beer? And why are you ignoring me?”

The real punchline. If you count the version originally played with paddles, before those were abandoned, Beer Pong is fifty years old. Beer Pong is older than… well… Pong. 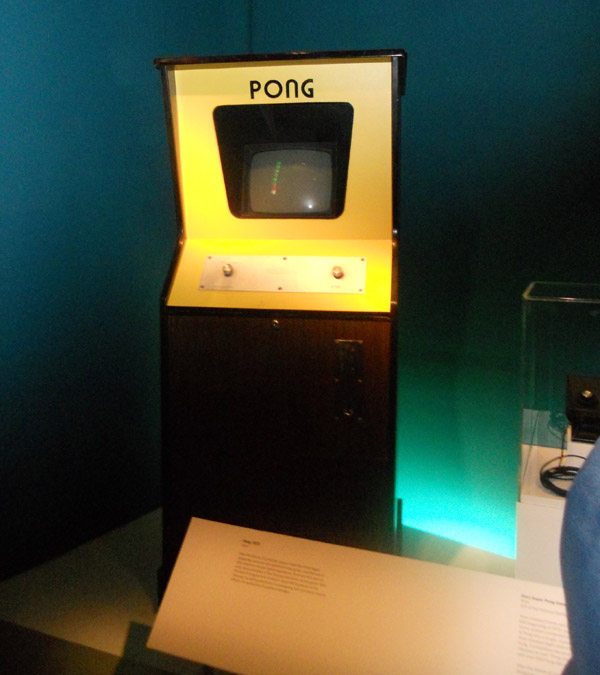 Video games have a preservation problem. Can you imagine people still playing Hokra in fifty years? As a game, as an idea, it’s good enough to last. But again, those damn controllers are a problem. Or the PC itself is the problem, a device whose form fifty years hence we can’t even begin to imagine. Meanwhile, you can find the original local multiplayer video games if you look hard enough, but essentially… they are relics, fit for a museum.

So Sportsfriends is Important because Local Multiplayer Is Important because… why? I’m genuinely not trying to be an ass because the experiences of these games are great and the social atmosphere is great. Everyone is having fun. But in the cold light I can’t say for sure that something important is happening with expo games. Important to whom? Are we really all just making games for each other, enthusiast to enthusiast? How far can we truly take this and for how long? Whose hearts can we touch?

In a crowded room, is it enough for a game to be great?

This coming Saturday night, at the Museum of the Moving Image, there is no IndieCade Expo. No one will be standing in the museum at night, playing Hokra.

This coming Saturday night, in a bar on 2nd Avenue, people will be standing around a table until well in the morning hours, playing Beer Pong.

And fifty years from now…

15 Responses to The Ultimate Triumph of Beer Pong