Mark Newheiser offers an interesting view on the role of narrative agents in games, and he devotes a good portion of his article to the connection between the “agent” and the player. Sometimes they’re one and the same; sometimes you take on a role that’s very expressly not you. Character is such a primary driver in any narrative medium that it deserves special attention; only in games can the character and the consumer be one and the same.

But characters live inside a narrative, and games continue to struggle with that. Not only how to create good ones, but even how to present them. SVGL’s Leigh Alexander’s got this piece about game narrative – well, not just narrative, something more meta. From long cutscenes to the modern design tenets of simplicity and bite-sized information, she ruminates on how the experience of the game is changing, particularly in narrative, but in other ways as well.

What it all comes down to, though, is imagination. The amount of mental elbow grease that a player puts into experiencing the world. The more imaginative the player, and the more effort the player applies to his or her imaginings, the more rich and immersive the game.

That issue of effort, obviously, has really changed in the last few years. After all, at the nativity of the video game, we were dealing with pixels the size of chiclets. This was a “dragon” back in those days:

Games had no choice but to be abstract, because the limitations of technology forced it. It’s similar to the technical limitations of early movie effects – there was really only so much you could do to make King Kong look real in 1933, compared to what Weta managed in 2005. Theatre, to a certain degree, has also been able to improve the veracity of its worlds as technology improves. Books, meanwhile, haven’t, can’t, won’t, and don’t need to. A novel is the ultimate mental exercise, because you don’t even get a representation of the world as the creator envisions it – it’s up to you to interpret words on the page and run them through your own image processing system. And yet “getting lost in a book” is arguably the easiest thing to do, assuming it’s a good one.

The image that headlines this piece paraphrases what’s probably the single most famous line of interactive experience ever penned:

You are standing in an open field west of a white house. There is a mailbox here.

It is the opening of Zork, and I ask you, does it get more cinematic than that? And once again, that ineffable YOU, always present, the one thing every game must have. It’s up to you to imagine that field, to decide whether it has dandelions or clover, to see the cherry blossoms (if there are any) fluttering through the air. You’ve gotta see the house: is it dilapidated, or well-kept? Is it entirely white, or are the outdoor shutters blue, or black? What is the day like? Is it summer, or is the air getting a little nippy from oncoming fall? Is the sun out? Is it morning or afternoon? Has it rained recently? What kind of birds are singing in the trees that surround the field? Do any trees surround the field?

You don’t get any of that from “You are standing in an open field west of a white house.” You have to make it. Gaming is an act of creation for the player as well as the developer.

Later on games were able to help us a little more… but with the help came challenges. Have a look at this shot from Ultima II. This is the Atari ST version, circa 1985.

Ultima II was the Oblivion of its time. The enormity of its game world, not to mention the degree of nonlinearity it offered, was amazing. And kind of still is, especially when you consider that it was entirely designed by one dude. Its visuals are hopelessly archaic by today’s standards, obviously, but back then we hadn’t tasted the sultry fruits of 3D worlds. Back then we had to imagine the world of Ultima II, using only what little help the screen image provided us. And yet to some, it was possible to look at that 32-color mess and see a lush world as verdant and mysterious as any fairy tale.

It wasn’t easy, though, that’s for sure. As with Zork, it took a good deal of imagination to really work out the details of the place. I suppose many people didn’t bother, but they’re missing out. 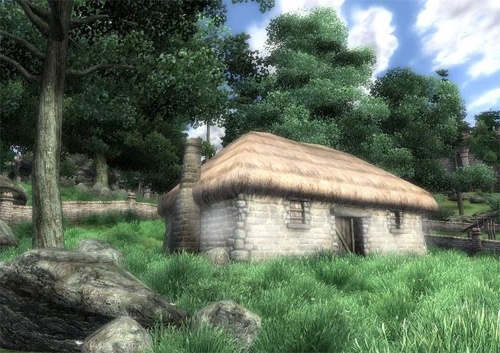 As the technology of graphics improved, the amount of toil required to really see the game world diminished. We’re now at a point where graphics are so close to photo-realism that imagination isn’t necessary, at least not from a visual perspective. Now the imagination requirements are about the experience, and how the game makes us feel.

I’m not a big fan of existence. I don’t really love life and I’m not particularly enthused about being stuck here for god knows how many more years. At the risk of sounding outrageously morose, life, to me, has always seemed like a party I never really wanted to attend in the first place, but was dragged to by friends, and now that I’m here I’m not having a very good time and I want to go home. That’s just how it is for me.

And thus it should come as no surprise that I like video games, because they give me the chance to visit other worlds, inhabit other personalities, and possibly kill people with shovels. Sigmund Freud was wrong. Dreams aren’t “the royal road to the unconscious,” video games are. Nothing lets us get closer to our own imaginations than when we’re in a good game.

The reason I like them in the first place is that they stimulate my imagination, and I prefer my imagination to reality. Their narratives and characters, so often lacking, don’t usually bother me because I simply imagine my own stuff to fill in holes and inadequacies. I’ve noted on other occasions that this talent isn’t always a good thing; sometimes I’ve found myself devoting waaaaaay too much effort to bolster a terrible alien Nazi zombie invasion story or a cardboard space marine character. It’s a cross I occasionally bear.

More and more we are seeing games that seem to recognize this role they play as evocateurs of the imagination, and clever developers are taking advantage of it. It’s been a while, for example, since a game unnerved me quite as much as Cryostasis, even though it’s actually kind of boring; more impressive than the creepy factor is that it’s the only game I can think of that makes you actually feel the cold. Plus, since there’s no way in hell I’m going to visit a haunted frozen Russian icebreaker in real life, I’m glad to have had the opportunity to do so from the comfort of my home. 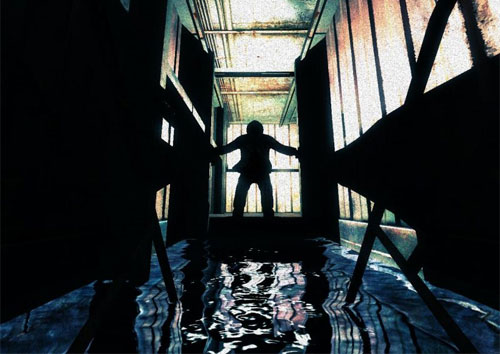 This is no white house. There is no mailbox. Cryostasis has other plans for you.

The visual impeccability of modern games has forced designers to experiment with other techniques for immersion, even within the confines of zombie Nazi alien space marine cliche. Say what you will about Gears of War’s storyline and the many, many missteps it makes, one thing Gears does better than so many other games is that it makes you feel awesome. Simple additions like the roadie run and handheld camera give you the visceral sensation of being part of the action.

It is unquestionably harder to make a game that evokes feelings and ignites the imagination than it is to make a cookie cutter title. As such we’ll see plenty of those in coming years. But the industry is in a state of massive flux right now; no one yet fully comprehends or appreciates the sea change that digital distribution models will bring, any more than we truly grokked what Google would mean when it first launched.

Because the model of how games are disseminated is changing, I believe we’re going to see more risk-taking and more innovation – not just from crazy indies (though we’ll see plenty there), but from the entrenched establishment as well. They’ll have to if they want to remain competitive… because gamers won’t settle for less. I think we’ve established that Dead Space wasn’t a scary game, or an innovative one. It was a reasonably good one, sure, but it wasn’t anything special. And I think EA took notice of that. Gamers want more than ordinary these days, a desire that ironically mirrors the fact that games themselves are all about escaping the ordinariness of everyday life.

Don’t expect the change to happen overnight, and understand that even with a model that allows games to bypass the publisher structure and go straight into gamers’ brains, someone is going to have to pay for development. That someone, whoever it is, will be risk-averse, at a cost to innovation. But the fundamental truth remains: games are evolving, slowly but inexorably, into something entirely new. Just as the imagination was once fired by the drab 16-color effects of The Legend of Zelda, to the extent that for millions of gamers Hyrule became a real place filled with real people, so too will games come to effect us on a far more subtle but delicious level. With nowhere to go in stimulating the senses, games will soon have to start stimulating the soul.

11 Responses to The Royal Road

Steam May or May Not Be Evil