Sometimes you go all the way to the other side of the country, then get a chance to chat with developers who work right in your backyard. That’s what happened to me when I met up with the development team PHL Collective while they were at the ID@Xbox booth at GDC. They were there showing off their game, ClusterPuck 99, available now on PC, and coming soon to XBox One.

As you might assume from the name, PHL Collective is a game development house based entirely in Philadelphia, PA. They were founded by former AAA game producer Nick Madonna in 2013. ClusterPuck 99 was an IndieCade East 2015 E-sports selection, and is now an ID@Xbox selection, which was announced at GDC.

ClusterPuck 99 came about as a deliberate entry into the genre of frenzied local multiplayer competitive games. It’s roughly based on air hockey, with a bit more of a cartoon-violent twist. Each player has an air hockey puck to control, and can catch, pass, and shoot the all-important puck to score goals. The catch is that the arenas are weird and deadly, with lots of obstacles for people to ram their hapless little avatars into. The action is easy to understand at a glance, and as a two button game, it’s easy to pick up and play as well. Matches go by fast and are bloody, especially on the more challenging arenas. The reception at IndieCade East this year was great, as announcers were on hand to call the shots and make the game feel like a real sport. The excitement in the room was electric! 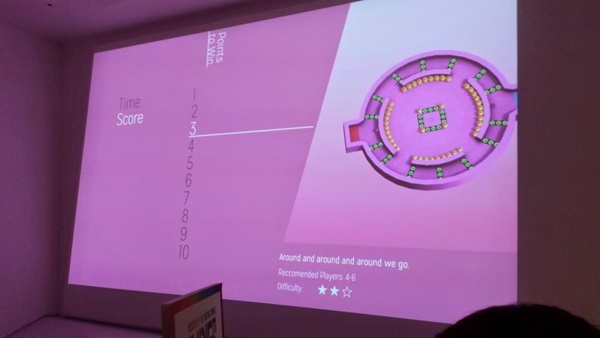 ClusterPuck 99 on the big board at IndieCade East!

At GDC I met with PHL Collective members Brian Gitlin and Terry DiFeliciantonio to talk about the game and its reception so far.

They said that they started developing the game in April of last year. The idea for a deadly air hockey game came together pretty quickly. The trickiest part was fine-tuning levels and testing to see what ended up being the most fun. They learned by iteration that even though extremely deadly, difficult levels looked fun on paper, the most difficult levels aren’t necessarily the most fun ones. Testing at PAX, and at IndieCade, helped to find the sweet spot. 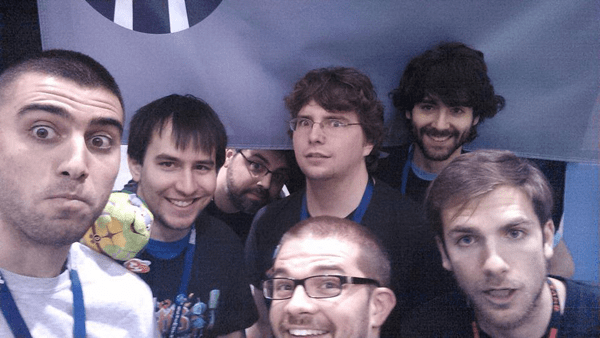 They knew from the beginning that in-person multiplayer was the right approach for this game. Online multiplayer is a bit different technically, but also, their feeling is that it loses something compared to in person play. The game Towerfall (which is really popular among local developers) was a big inspiration on their design. The upcoming #IDARB also showed that it was still viable to release new games in this genre. Said Gitlin: “In this era of on-line multiplayer – people were always playing by themselves. All of the sudden people remembered – this-” gesturing to watching four people at a time engaged with the game around the console display- “was fun!”

The ability to support 8-person seamless local play is what they said drew them to Xbox One as their choice of console. They worked with the Xbox program for Indies – ID@Xbox, and said it was a great experience.  The Xbox One version of ClusterPuck99 will have some unique Xbox-only levels, and a level editor so you can create your own levels to challenge your friends. Check out their pretty darn hilarious announcement trailer below:

The team’s sense of humor shows through in other ways. Players in ClusterPuck 99 can select any symbol on their puck to identify themselves, from a simple square or clover, to a piece of pizza or, er, a butt. The butt was originally a graphic made for a Steam achievement – “The Doof” – earned for scoring ten goals on your own team’s goal. Since the graphic was already the right size and art style, it made sense to just include it as a player in the game.

What’s next for PHL Collective? Nailing down the final release for ClusterPuck 99 is their primary goal for now. But they also have some other projects that they return to, such as the Kinect-based wacky boxing game Noodle Arm Royale. Continuing with the boxing theme, they described another experiment — Real Boxing – Actual Boxing — a game made entirely with cardboard boxes, where cardboard boxes are used to smash your friends’ cardboard animals. (It’s literally, actually, boxing.)

Gitlin and DiFeliciantonio said they both really enjoyed showing off the game at GDC. Getting feedback from other professional developers is a whole new level of playtesting. “Other developers have been down this road, solved these problems before,” so the atmosphere isn’t just enthusiastic but genuinely helpful too.

Thank you to the PHL Collective devs for talking with me at GDC!

Email the author of this post at aj@Tap-Repeatedly.com. Reminder/disclosure that I work for Microsoft. If you want to learn more about Xbox One and how to get your game there, here’s the page of announcements from GDC.