I know I’m writing you out of the blue. I just saw you were going through some shit right now, and, I just wanted to send you a note.

I’m gonna start with a confession. I was never, like, a fan, back in the 90s. In fact I guess I might have hated you. It wasn’t your fault. It was the fault of the media narrative that surrounded you. See, I was in to Metroid, big-time. And all the noise about you being “the first woman to star in a video game” sort of rubbed me the wrong way. You and I both know you weren’t the first, but that’s the way the mostly-male media wanted to spin it. And you know, when girls are growing up, we have our role models, and mine was Samus Aran.

We know how that turned out.

A few years ago, when I was new to blogging about games, I was musing about a potential Tomb Raider reboot. I thought an adult-oriented reboot would be nice, something for the grown-ups. But by this I meant, it should have more horror elements, maybe some demons or mummies to shoot instead of just tigers and dinosaurs. And I also meant, it should have a sex scene. And here, by “something for the grown-ups,” I meant “something for the ladies.” After all, raiding tombs is a terribly solitary pursuit for a woman of wealth and class. Wouldn’t it be nice to have someone to share that with? Say, an evil tomb-raiding rival with a clever smirk and sinister plans, a sort of frenemy that you could have sizzling chemistry with? 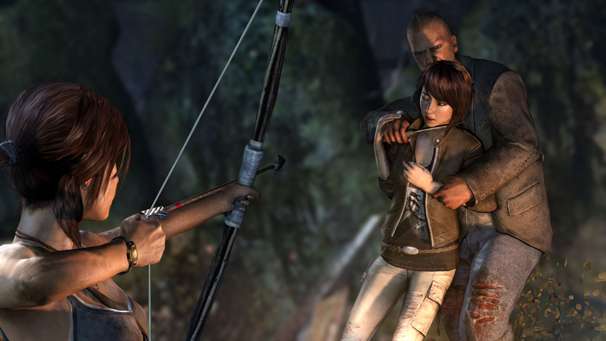 But of course, that’s … not in the cards for you, is it? I totally wasn’t thinking. You can’t have a boyfriend, even in the context of a tragic romance that isn’t meant to be. You belong not to some character on the screen with you, but to the men in the audience. The man holding the controller.

In the early days, it was all about controlling you, as a doll for his amusement. “If I’m going to have to stare at an ass…” ha ha ha, yeah, you’ve heard that one before. But now? That’s not enough, apparently. Now you also need to be protected by that man. He needs to understand that you’re weak, and you need his toughness, his masculinity, his ability to Press X to Avoid Rape.

It wouldn’t be a woman, after all. It isn’t supposed to be a woman, holding that controller, someone who might want a hero to look up to. Someone who might want a glamorous world of adventure, or, even a struggle they could identify with. It’s obviously got to be a man. And the men that inherited your franchise were… well, they were stuck with, saddled with, this idea of a woman protagonist, and what more could they do? They had to hurt you because it was all they know how to do.

This is not what I asked for.

Who asked for this?

Well, I guess I know. And I know there are people who are going to defend it, because heroes go through adversity. It’s part of the job description. And I don’t mind, personally, seeing heroes go through adversity. I like when someone has to fight back and get tough, and I’m okay with seeing a hero struggle. Great with it, even. But the real motivation behind this was absolutely laid bare. It wasn’t to create a hero’s journey, starring you. It was to create some kind of…

“”The ability to see her as a human is even more enticing to me than the more sexualized version of yesteryear,” [Rosenberg] said.

It was about the male gaze, again, in a new and different way.

It was about “even more enticing to me.”

So what I’m saying is: sorry, Lara. Sorry for anything anyone, or I, might have said indicating breasts, curves, or self-confidence were problems with your character. Sorry for the way that giving a woman a heroic story also means she has to be a toy and object for men, to be beaten up and felt up to make them feel stronger. Sorry that the designers at the end of the day don’t seem to be all that interested in your agency. We can all just hope it’ll be okay by the next reboot.

Good luck out there in the meantime,

P.S. That old canard about someone “accidentally” setting your chest size to 150 percent.  Nobody actually believes that, right? I’m just checking.

22 Responses to Apologies to Lara Croft