The Penny Arcade webcomic spoke once of the “MegaMan 9 Effect” – that moment where the nostalgia of playing a new, but retro-styled game makes them feel as if they were a child again, experiencing such games for the first time. Axiom Verge, available this week for PC on Steam, is a retro-styled game. It does not make me feel like a child again. It makes me feel old. As I play Axiom Verge, I can feel my reflexes slowing down, my patience for platforming wearing thinner with every slipped jump. Last week, I spent at least two hours of my precious Earth-time slamming my fingers against a controller while a little man on a screen tried to shoot little red laser bullets at the pixel-perfect weak spot on a giant evil bug. Someday, I will die.

Axiom Verge does not care about my age. The evil bug is what it is and has exactly as many hit points as it has. Axiom Verge is not going to throw me a Pity Leaf or a Skip Fight Token. I triumph or I perish. 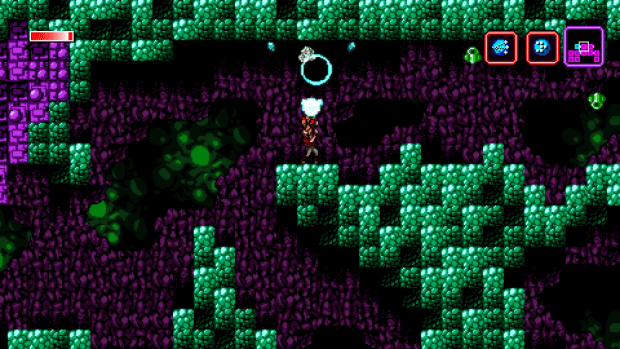 Frankly, I perish a lot.

Axiom Verge is a “Metroidvania” game, a genre that’s coming back in vogue in a big way from nostalgia-fueled Kickstarters. Axiom Verge is also a one-man-show of a game, of the kind that sometimes appears in indies: the vision of Tom Happ, who did the graphics, design, coding, music, and art. It’s an impressive feat. The game resembles Super Metroid (or, more precisely, Metroid Fusion, because it has a lot of interstitial dialog that is missing from the earlier Metroid titles), but also has some shades of Contra particularly in the boss and weapon designs.

Axiom Verge stars Trace, a scientist. When shown in portrait form during dialog, he has an interesting face. That goes a long way toward making me like him, because he’s otherwise pretty bland. I don’t know why protagonist matters to me so much in Metroidvanias, but it really does. Trace has a computer-voice-in-his-ear to talk to (because, it’s a video game), and she has a unique manner of speaking, sounding a bit broken. Trace’s dialog, however, is purely utilitarian: “Where am I? Who are you? Why am I here? Why are there monsters here?” etc. The game’s story is told in exposition and flashback. Though the story itself does the job, I’m not sold on the way it’s presented.

You can turn the story off, playing the game in Speedrun mode, and that may just be the best way to do it. The Speedrun feature is a mode that removes all random elements and dialog drops from the game, turning Axiom Verge into an exercise in environment-only storytelling. Here, the level graphics have to speak for themselves, and they do this incredibly well. Here is a stream tunnel and here are outdoor ruins. That big pile of corpses under a door and the way the music just cut out must mean a boss fight is incoming. 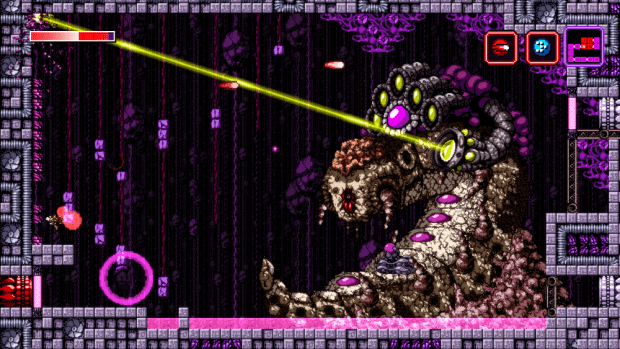 The bosses are both my favorite and and least favorite parts of the game: beautiful as spectacles, but tedious to fight. Often pure trial-and-error was required at least on my part before I even figured out exactly how to do damage to a boss, then six tries more before I figured out how to evade the boss’s attack pattern. Then came its long, slow, slog of a death after I had this down: jump jump shoot shoot, jump jump shoot shoot, jump jump jump duuuuuuuck repeat. I know that these things can be done faster, and the fact that I found each boss fight so tedious is because this is my first time through the game and I haven’t uncovered the secrets for quicker kills. But boy, do I wish I had something like Super Missiles.

I feel the same way about the exploration component in the game. It’s not necessarily backtrack-heavy, but it ends up being backtrack-heavy. The marker system is inadequate to reveal where Trace has to go next, and the game doesn’t do a good job of leading you there. 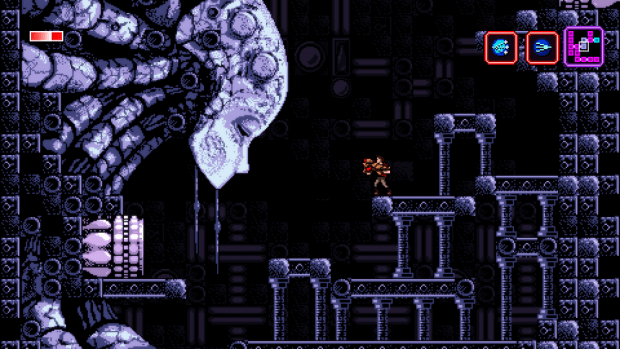 I’m actually fond of the “computer lady in your ear” trope. If I wasn’t, my icon here on Tap-Repeatedly wouldn’t be Alia from MegaMan X5, who is not even the best incarnation of this sort of character. But the reason that a protagonist in a jumpy-shooty game is given a computer-lady-in-the-ear is because she is supposed to be helpful. She gives you some idea of where to go or how to proceed or even at worst warns you of some bit of danger you already saw. Elsenova, the computer companion for most of Axiom Verge, has an interesting vocal tic but serves none of these purposes. “You need to find thing,” she tells me often enough, but she doesn’t tell me if thing is east or west of me, or how I will know thing when I find it. To actually make progress in Axiom Verge, you need to remember a door that you couldn’t reach an hour ago, and go back and try it, wait, no not that door that’s just a worthless power-up, maybe this door? No not that one either.

A solution to this is obvious: play the game exactly how I played Super Metroid in 1994. Get a notebook, painstakingly redraw every segment of the in-game map, and add more complete notes. But in the interest of getting as far in the game as I could manage before reviewing, I looked up videos on YouTube plenty of times instead. That’s what happens when you get old.

Power-ups in the game range between completely cool and severe bummers. Axiom Verge does the “Piece of Heart” thing where it splits up some health and weapon upgrades into five different pieces, and you aren’t upgraded officially until you have five. It feels like a disappointment to trek across the map only to get this prize, which is strange since Pieces of Heart in Zelda usually feel good. I believe it’s because in Axiom Verge I rarely have to figure out how to get to a thing. I either have the requisite upgrade to reach the item, or I don’t.

Axiom Verge has some bonus areas that are generated procedurally (unless you are in Speedrun Mode). They’re located in randomized spots in secret locations and shuffle each playthrough. I know this about these areas because I looked a few things up on the internet and read about them in a development diary. In the actual game, the purpose of these spaces is explained really poorly. The first time Trace finds and steps into such a place, Elsenova says “no, this is a distortion in the world, you should turn back!” This is accompanied with an effect that looks like your computer screen is shorting out, so I genuinely believed her. I thought at the time that this would tie into the game’s story somehow, and that I’d have to return here in the endgame after Friend Computer’s Sudden but Inevitable Betrayal. But when I finally did get brave enough to delve the area, it turned out to be a bunch of randomly strung-together rooms, with a “slightly increases the range of your weapons” power-up at the bottom. It felt like a lot of disappointment for that much build-up. 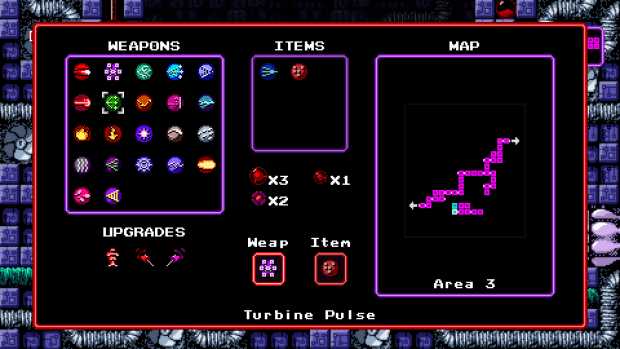 On the other hand, the “Glitch Gun” weapon that Trace gets in the game is pretty cool. The weapon is a short-range beam that glitches out everything in its path. Enemies have distorted sprites when glitched, and a variety of other effects: some move slower, some become more vulnerable, some become totally harmless. But some enemies are actually bigger pains in the ass when glitched, so it’s worth it to experiment with the gun and then use it judiciously on different targets. The glitch gun also has environmental effects and can sometimes open certain doors or walls. This feels less like it was really used to its potential. “You need a red key to open this red door” is always the same interaction, even when the red key is a short-range beam and the red door is a flickering error texture.

There is a really interesting bit in Axiom Verge where you can enter “passcodes” in the menu to get new game effects. These are discovered when playing. This really tickles my inner cryptographer, and is one thing I’ve avoided looking up any spoilers or hints for so I could discover these Easter Eggs myself.

Still, I think the idea of hacking the game from the inside in such a way is inherently flawed from the beginning. Glitchiness, broken-ness, and unintentional sequence breaks, all nostalgic hallmarks of older games, are a magic on their own. I don’t think it’s possible to capture that magic in a way that’s also deliberately polished. By definition, you can’t make a mistake on purpose. It would work better for me if it felt more like real secrets I discovered instead of being necessary for completion.

Axiom Verge opens up pretty wide at about the 2/3 mark, and that was where I can say I was having the best time with it. Trace gets a trenchcoat power-up that allows him to freely teleport short distances, bypassing a lot of obstacles. This power-up also, critically, allows me to pretend I’m playing the game as The Tenth Doctor instead. 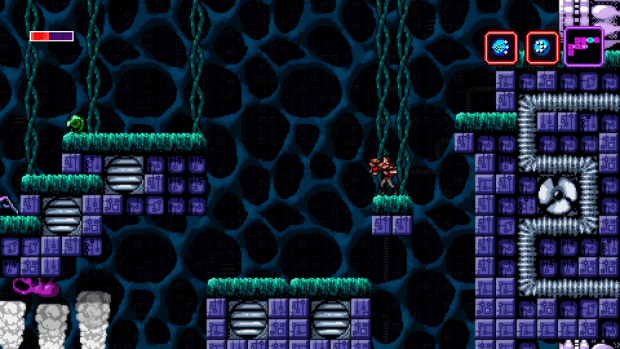 The music is catchy, and suits the atmosphere. But I also found it starting to get on my nerves after a lot of backtracking. I think this is because the game’s sound mix is a little uneven, with some instrumentation or sound effects much louder and sharper than others. A good thing: the beep-beep-beep noise that you hear when low on health is always set in time to the music that’s playing. A bad thing: there is a beep-beep-beep noise when you’re low on health, and it’s loud and shrill as such noises always are.

While the graphics take advantage of modern processing power despite Axiom Verge otherwise resembling a 16-bit game, Axiom Verge doesn’t make many modern design concessions. In other words, it’s hard in an NES way. This is a commitment to purity you may appreciate, or may find controller-snappingly frustrating.

I would describe my experience with Axiom Verge as an ebb-and-flow of joy and frustration. I hate to give such a mixed review to a game that does so much right. Axiom Verge wants me to master it, to play it many times until I understand its world and rules. Maybe it deserves a better, younger me. As someone who was obsessed with Super Metroid when I was a teenager, I now only have what’s left of me to give.

This review was written based on a free Steam key given to the author for game review purposes. You can email the author of this post at aj@Tap-Repeatedly.com.