Geralt of Rivia is a sullen man, unlikable even, but I like him because he’s cooler than me and because he always remembers my birthday. Which is today. I am forty.

So far it doesn’t seem much different than when I was thirty-nine, but the real test is whether I survive the next few days. I’m currently participating in a weekend-long birthday extravaganza thrown by my friends to celebrate the many late-May birthdays in our group. When I was younger, this sort of multi-day celebration was par for the course. Now that I’m forty it’ll probably kill me. In fact, I might already be dead. This post could be from beyond the grave!

I only bring up my birthday because The Witcher: Assassins of Kings also arrived on or around it, as I chronicled at the time, and it seemed very goes round/comes round that Wild Hunt should do the same. It has no bearing beyond that and you shouldn’t feel obligated to send me a present, though if you feel you must, the easiest way would probably be to send a lump of currency through PayPal or something – just PM me and I’ll give you the details – or buy me an Amazon gift card. But seriously there’s no need. 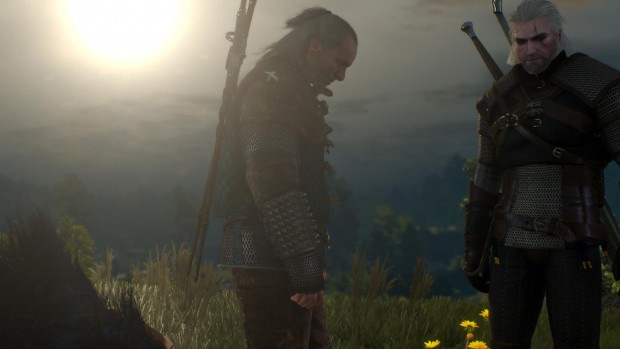 CD Projekt Red has outdone itself again with Wild Hunt. Twenty hours in, I still haven’t got a clear picture of the game’s total scale – the sense is that it’s going to be quite vast, but more… more digestibly so than Dragon Age: Inquisition. Both are excellent action-RPGs, but so far I feel more engaged with Wild Hunt, and less burdened by the evident enormousness of its lore and to-do list.

Anderzej Sapkowski’s grim, mud-spattered Witcher novels are a perfect RPG setting of sex and violence, where the average life is nasty, brutish, and short. Very few people in the world of The Witcher would make it to their fortieth birthday; doing so would be worthy of celebration and gifts – like a pony, an Optimus Maximus keyboard, a Playstation 4 Bloodborne bundle, an Adobe CC subscription, or an Oculus Rift Crystal Cove Devkit – all readily available from retailers such as Amazon.com, and which in many cases can be purchased with gift wrap and a personalized card made out tohrrrrrrrrr

Normally the hippogriffs and flying castles are out when gritty adult themes go in, but The Witcher takes the opposite route. Geralt of Rivia screws and eviscerates his way across a high fantasy world as bloody and political as George RR Martin’s, but in which you can’t swing a pixie without hitting monsters and dark magicks. Witchers are professional monster hunters; Geralt and his colleagues endured years of brutal training and magical modification that left them irreparably scarred. Witchers don’t work for free, and common folk fear them (though tavern wenches are still happy give it up), but when a manticore or den of werewolves or vampire coven or evil fog threaten the populace, it’s best to call in a professional. 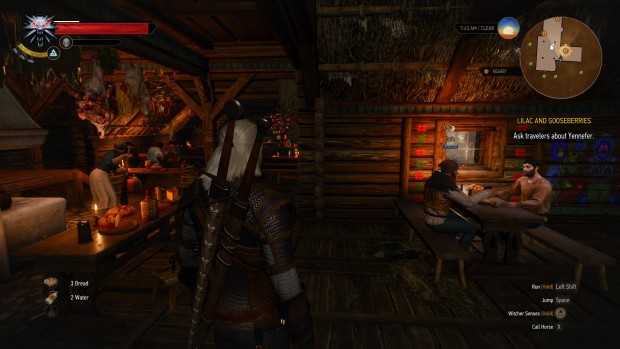 They actually went to the trouble of creating like forty different kinds of liquor to drink, plus a confusing card game called “Gwent.” Because the game wasn’t big enough already, I guess.

The books and games are sort of parallel, telling the same general story, but the plot arc and details of the Witcher games are not going to be very clear unless you’ve read Sapkowski’s novels and short story collections. That’s six volumes already, of which only three or four have been translated into English, so a certain degree of bewilderment is to be expected here. Wild Hunt also doesn’t do much (anything) to bring players up to speed, so if you’re jumping into the series here it’ll be even more confusing. The thing is, that’s never bothered me with the Witcher games. No, I can’t remember why Nilfgaard invaded Temeria or what exactly happened to the Scoia Tel, but I don’t really care. This should prove to be the case for anyone, even Witcher virgins, so don’t worry about it unless you really can’t get into something without a solid fiction-foundation.

As the title implies, this installment sees the dreaded Wild Hunt finally unleashed. A flotilla of the damned that thunders across the night sky; a herald of frozen doom and, I guess, kind of the meta-bad-guy. They don’t like Geralt or his friends, and there’s this girl named Ciri who I gather is like the dark-fantasy version of the Golden Child, and who needs to be found… um… protected… or maybe just consulted with, or possibly installed in some secure location, or even tapped repeatedly (given that it’s The Witcher), I don’t know. 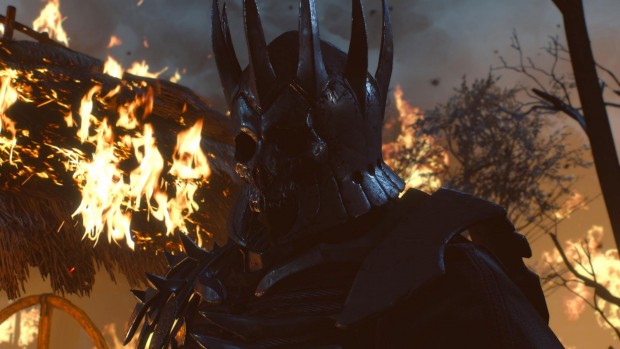 “Greetings! I am a member of the Wild Hunt. Though I prefer to think of us as more of a raucous hunt. You say ‘tomato,’ I say ‘tomato.’ You know, that expression doesn’t really work in text.”

The main story is just one thread in a much bigger tapestry, though. Wild Hunt’s vast open world is wall to wall quests and adventures and interesting things to explore, murder, and/or go balls-deep in. You’ll still sense an underlying a chapter-based structure here, similar to Assassins of Kings, but one that grants practically limitless freedom within the permeable bounds of each enormous section.

It plays a lot like Bioware’s Dragon Age: Inquisition, to the point where you could probably pick one or the other and be okay, though they’re quite unlike in flavor. Comparing them is akin a shootout between chocolate and vanilla ice cream: both are yummy, alike in many ways, yet each is fundamentally unique.

I’m playing on the PC, swapping between keyboard/mouse and 360 controller according to mood. Wild Hunt could desperately benefit from more radial menus and UI work; this is The Witcher’s best interface to date, but it’s far from ideal (the same could be said, for different reasons, of Inquisition). I’d call it “okay,” meaning it works and doesn’t frustrate, but has plenty of obvious opportunities for improvement. 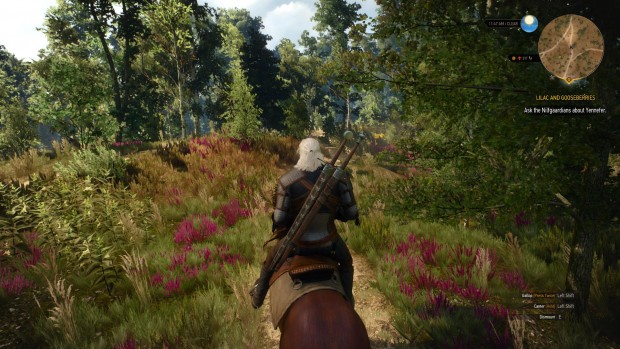 An idyllic canter through the meadow, then lunch.
Which is to say, you’ll BE lunch. There’s some ghouls hiding in the trees ahead.

Wild Hunt’s RED Engine is a fully multithreaded, 64-bit DX11 renderer that’s pretty GPU hungry. CPU horsepower has more wiggle room; my Sandy Bridge i7-2600K is several generations old and literally one step above Wild Hunt’s minimum requirement, but the game runs smoothly at 1080p, even with all features maxxed out, thanks to a brand new GeForce 970 handling graphics chores.

Speaking of graphics, those in the final release of Wild Hunt are markedly unlike the visuals shown by CD Projekt over the past two years of pre-release hype. Some more remote internet principalities are torch-and-pitchfork enraged by this, claiming that CD Projekt pulled some kind of weird visual downgrade chicanery on us. My own view is a little more tempered by sanity.

It’s true the game looks significantly different, but different doesn’t necessarily mean worse, which is obvious to anyone who spares a second glance at the graphics before storming off to the flame war. This isn’t some console-port downgrade hack. Far as I can tell, it’s a carefully considered and well-executed adjustment to style, presumably for performance reasons. Early Wild Hunt footage showed a realistic, high-fidelity visual environment that looked (again) a lot like Dragon Age: Inquisition. The final version of Wild Hunt is much more stylized, distant colors blending together like liquid, then sharpening to distinctiveness up close. It feels like you’re inside a painting, and it’s very beautiful. It is not the razor-edged photorealism we saw before, but it’s hardly an affront. Plus it allows for some really striking effects, like blood-drenched sunsets and blinding HDR dawn. Give it a chance and you’ll see there’s nothing to complain about here. 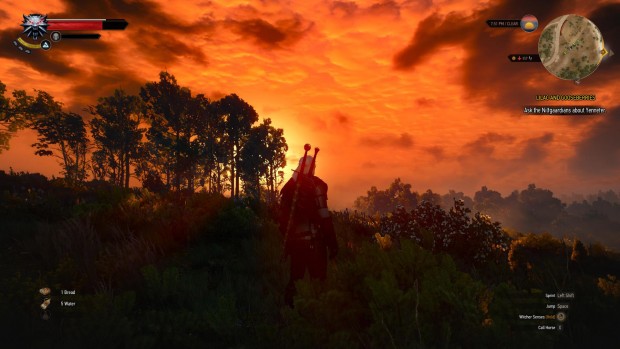 If I were to complain about Wild Hunt, it’d be about small things. Geralt’s horse isn’t the worst in gaming history – not even in the top five worst – but I’d still like to murder it and all of horse-kind when it gets hung up on a bush or takes forever to get moving. Melee combat is vastly improved over that in Assassins of Kings, but still lacks the punch of Dark Souls or Shadow of Mordor. And as optimized as the game is generally, the semi-clumsy interface introduces annoyingly long delays bringing up the map or other subscreens.

But even my biggest complaints don’t amount to much in the final analysis. CD Projekt bit off waaaaaay more than a newbie studio should’ve been able to chew when it took on The Witcher in 2007, then dramatically improved their formula with 2010’s Assassins of Kings. They’ve done it again here in Wild Hunt, which generally retains the best elements of its predecessor and enhances everything else. If there’s to be a fourth Witcher game, I expect it to be better still. CD Projekt Red has proven itself three times over, and there’s simply no evidence to even suggest that they might let us down.

Wild Hunt is a grown-up game, darker and bleaker and gorier than ever, serious without taking itself too seriously, funny and sardonic as often as it is grim. Geralt of Rivia can be a difficult man to like, but he’s enervatingly human and believable, especially compared to Inquisition’s wide-brushed caricatures. The world of The Witcher is populated by the vile, the greedy, the opportunistic, the savage, the lustful, and (often) the disgusting. Rather than being a turnoff, it makes you appreciate the few beacons of goodness all the more when they appear.

Geralt is not one of those beacons. He’s not a bad person, just the product of his past – foundationally, irredeemably damaged by his Witcherization, cast out by society, pursued by unknowable forces, and tormented by his relationships. Geralt’s entire life is a paper chain of things left unsaid and undone, regretted and unforgiven. He can be mean, uncaring, cruel, and quick to murder, but he owns it. 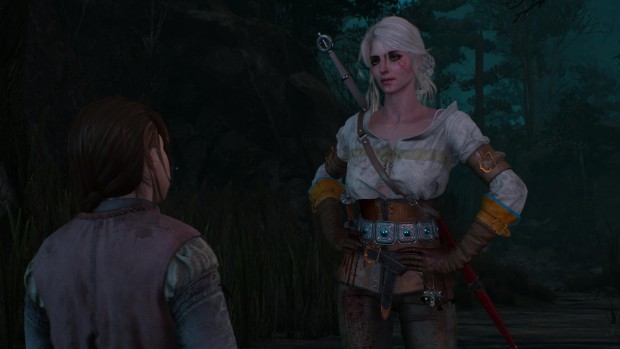 The whole “filthy, bloodsoaked, white hair, goth eyeshadow, hideous facial scar” look is hard to pull off, but Ciri does okay with it.

Fetching she-witcher Ciri, the search for whom makes up the core of the game’s main arc, is a different story. For the first fifteen hours of Wild Hunt it seems like all you hear about is Ciri this and Ciri that, then the action shifts and you’re given a chance, momentarily, to play as her, and it’s like, oh, this is what the fuss was about. Because you discover someone who appears truly, fundamentally decent and good, untarnished by the pustulent world and its evils, but very much equal to the task of fighting them. She also has the confidence to take eye make-up in bold and sexy new directions of which I approve.

The Witcher: Wild Hunt is a great game, another triumph for CD Projekt Red. The team has some work to do in the world of patches, because it’s not without its technical hobgoblins, but long-term support is something else for which CD Projekt has earned our trust. There’s little reason to doubt Wild Hunt will continue to improve over the next year or so.

Those monsters aren’t going to hunt themselves. Get out there and get witching.

Email “over the hill” jokes to Steerpike@Tap-Repeatedly.com.