The radio said “No, John. You are the demons.”

And then, John was a Zombie.

I sometimes enjoy the multiple-playthroughs gimmick. I liked it in Automata, because I thought the second playthrough of Automata was significantly different. Ditto, for example, Alpha Protocol, which allows your choices to shuffle the story significantly.

Subsequent playthroughs of Replicant: Numbers (I won’t be typing those numbers again) feel a bit more like a slog than they did in Automata. It’s leaving me with the same feeling that Bravely Default did. I know I’m actually close to the true ending, going into round four of the game, but man, I kinda don’t wanna go back in there. I don’t wanna so much that I stopped playing the game to drop everything and write about the game, a thing I haven’t done on this web site in over a year!

A previous version of this game, the “daddy” version, was called NieR Gestalt. This is appropriate because the game is really kind of a gestalt, if you will, a mish-mash of several other games. It’s like Devil May Cry, but it’s also like Robotron 2084. There’s a part that’s explicitly Ocarina of Time (you’ll know it when you see it), and the game’s story includes a growing up timeskip just like Ocarina of Time. There’s a part that is Zork. There’s a part that’s Resident Evil, which is appropriate not just because Devil May Cry was already Resident Evil, but because the voiceover commentary from D.C. Douglas, famously Albert Wesker, is also omnipresent in this game.

No joking here: the voice acting and general soundscape are possibly the best reasons to play NieR: Replicant: Numbers. Douglas’ character in this is a magical talking book that floats over your avatar’s shoulder, and the tome’s running commentary drips with disdain and sarcasm. That book always says exactly what I am thinking, exactly when I’m thinking it.

The book also shoots bullets real good, which is nice for if you want to just hold down the “shoot bullets” button with one finger while drinking a beer with your opposite hand. Maybe I’ve just been training at 10x gravity for the past several years at this point, but NieR Replicant is really easy. It is not Platinum Hard. It’s way easy, except for when it’s being cheap, like lining up enemies that knock you off of cliffs repeatedly.  I could turn the game up to Hard difficulty, but my understanding is that this just makes the enemies bullet sponge more without making the combat significantly harder per se. 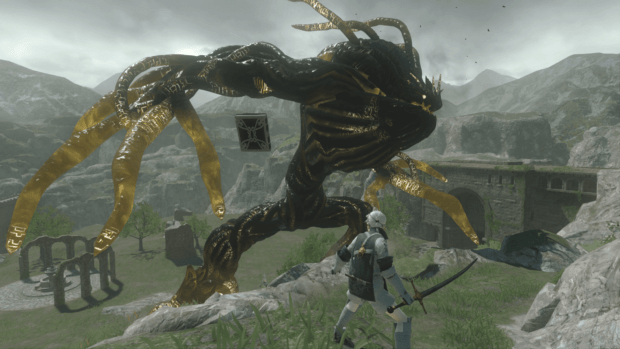 I figured going in that I was not going to want to play it more than the “required” amount of times, so I actually made a spreadsheet to ensure I didn’t miss any secrets. To get the true ending, you have to collect all the weapons in the game, though it’s not required to also upgrade them. A few in the first half of the game are missable, but the second half not so much, since the second half is the half that you have to play multiple times. Because of my research, I knew that many of the side quests in the game were deliberate wastes of time, though I still did more of them than necessary because it’s so hard to resist sidequests. I ended up finishing my third playthrough with 69% of sidequests completed: nice.

I got quite a few of the rare Achievements, because I did spend some time doing the gardening minigame. I didn’t get the fishing achievement, because it isn’t just from completing all the fishing related quests. You also have to catch an epic legendary fish, and I didn’t look up how to do this until it was too late, and then I didn’t bother. I can’t imagine how much time you’d have to sink into the game to get every weapon upgrade, because weapon upgrades are done by sourcing rare drops from field critters and getting them is a long and arduous process.

Weapons also… suck? There are three types of weapons: one-handed, two-handed, and spears. Swapping between the weapon types is somewhat useful. I used lighter weapons to clear trash, and heavier weapons for bosses. But there’s not a sense of much variety among the weapons that I gathered. It didn’t feel meaningful to be using a “very light” sword versus a “medium” sword if that sword was also one-handed so I typically just grabbed whichever weapon in that category was more upgraded at the time. Weapons that you buy at shops generally are more effective than weapons found within quests, which felt a little backwards to me. 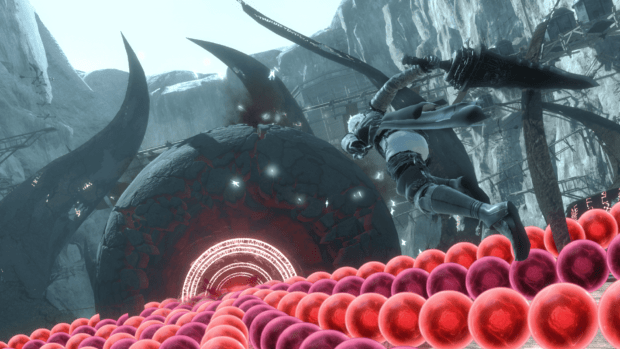 There’s a dozen achievements, on the Steam version at least, for speed running boss fights. The time limits for these boss battles seem really generous on paper. Three and a half minutes is a long time to spend in bullet hell. I got about half of these achievements. But the part nobody will tell you – nobody but me – is that these bosses for the most part all have some speech they have to give, mid-fight, about how your quest is futile and you have no chance blah blah. Then you have to argue back with them about how you are JUST HERE TO SAVE YONAH. During this span of time, you can’t damage the boss significantly, because the boss has to finish its speech first and you have to finish arguing with it. This happens every fight. It’s mind-numbingly arduous, especially the third time through or so, and especially when I am screaming “I AM ON THE CLOCK HERE” because I want an achievement and then I miss it presumably by a very narrow sliver and then I guess I honestly don’t care.

I don’t know how to feel about the game’s plot.

Actual spoilers in the next three paragraphs – skip down to the next short sentence to miss them.

I predicted one twist early on – it’s not much of a twist – that all the evil Shade monsters that were attacking me were actually going to be framed as innocent children later on in the story. This is because I played Automata, so I felt that rolling on the wind, but also because when you kill the small Shades, they drop cute things like Used Coloring Books. There’s no use that I can figure out for some of this random garbage. Some of it can be repurposed into weapon upgrades. But mostly it’s just there as a clue that you’re slaughtering the ghosts of children, you monster. But that doesn’t quite work for me, because if the ghosts of children didn’t want to die so much, they wouldn’t be running so eagerly into the tip of my sword. That’s not an exaggeration. The game offers plenty of innocent creatures like sheep that just stand around minding their own business, but the Shades charge at you, bloodthirsty and claws bared. Trying to re-contextualize a single boss fight as a tragic situation is a trick that would work once and be meaningful. Trying to re-contextualize every boss fight as a tragic situation made my eyes roll. The Shades are sitting in piles of blood and bones but we’re supposed to feel bad for them because they only did the murders because they were very sad. I must force myself to remember that this is a remake of a ten year old game. This kind of beat hadn’t been done to death yet at the time.

Aside from that particular twist, the rest of the plot is also drowning in misery. The world around you, as small as it is, is lovely. But no one in this world can escape torment. Even minor characters that you may come to like are likely to meet gruesome ends. Quest givers die, offscreen, before you can go back and turn their quest in. They are only dead, so they are the lucky ones. Some of the other misery is extremely creative misery, much more creative than merely dying! Body horror abounds. Yoko Taro has a fertile imagination in which to grow new varieties of suffering. It can sometimes be a little much. 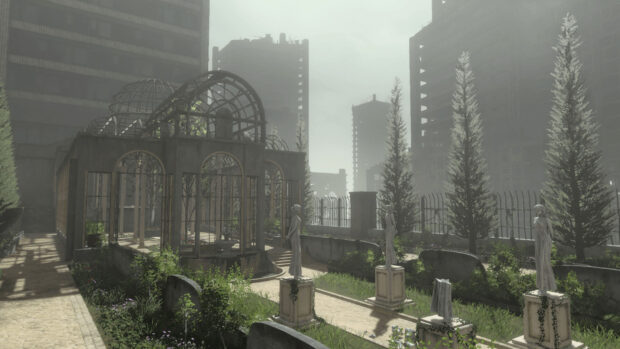 The locations in this game are very beautiful. I particularly enjoyed the seaside town, a pastiche of Greek coast architecture framed by a broken railroad bridge that reminded me of Key West. The sense of people rebuilding after a great disaster is subtly woven into the design of these spaces. There are not that many spaces, and the game pads runtime out by forcing a lot of recycling and backtracking into the same half-dozen areas.

The game has frame-rate issues. Sometimes, for seemingly no reason, it would turn into a slide show for me. Loading screens are long, and especially while streaming the game I felt as if it might slow down to a crawl and crash on me at any moment. I’m always one to blame my own computer first, but I’ve seen other people complain about issues like this.

The problem with in-Steam reviews is that I can’t give a game there a middlin-score review. It’s thumbs up, or thumbs down, on Steam. That’s the reason I had to write so many more words. I gave the game a thumbs up on Steam, for largely superficial reasons. The environments are pretty. The music is very, very good. The characters are great. Much of the story and gameplay I do not really like, and those are two big parts of a game experience. I am assured by vague forum posts that the “Ending E” playthrough – the real, final playthrough, is totally different and is worth the price of admission. I have not experienced it yet… and I think I need a long break from the game before I want to.

I really did like Automata, which felt fresh, and I think that’s part of what makes this one seem lesser by comparison. If you only play one NieR game, Automata is the one to play. If you liked it enough to want a second helping, Replicant is probably the best form you can experience that in. It still feels a little more like medicine than dessert.

Email the author of this post at aj@Tap-Repeatedly.com. She’d have mentioned the FF XIV raids as another great way to re-experience the magic of Automata, but it just didn’t flow.