Available for Windows (system specs below)

“Nikopol: Secrets of the Immortals is a disappointing adventure game adaptation of the works of Enki Bilal, famed French graphic novelist. Stunningly detailed graphics and atmosphere do not compensate for the obscure, linear storyline cluttered with Rhem-like puzzles. At under 10 hours playing time, this strange game earns only a “masks” rating, or 60%.” 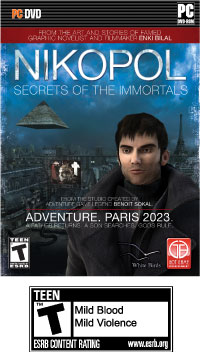 Let us trust our Dictator-Prophet

You play as Alcide Nikopol, an artist in Paris, year 2023. The City has evolved into a wealthy class living in the center and the rest living in slum-like conditions in the outskirts. The country is ruled by a Dictator-Prophet, repleat with political conspiracy and intrigue, threatened by an Underground movement, visited by enigmatic extra-terrestials who literally park outside your windows. You learn your father may be alive and are led through narrative devices and puzzles on an ambiguous journey.

The initial look and ambience of Nikopol is quite arresting. Our heroe’s flat is richly detailed, showing its slum-like appearance, and also some modern devices appropriate to this sci-fi future. Using a first-person perspective, you can rotate 360 degrees and move from node to node. A very small cursor becomes alive with symbols when an interactive object appears. Right mouse click brings up an Inventory. Your first puzzle is quite ingenious – painting a picture of your father from a movie projection. Nikopol, acted nicely, reflects to himself, and you also find excellent background noises and environmental activities.

But….what the heck is going on? We’ve got a great set up, beautifully depicted, yet with a storyline I couldn’t begin to fathom or really care about. Not only that, there is also little to no character interaction, and you find yourself dragged along in a lonely progression from puzzle to puzzle, towards an ending that leaves more questions unanswered than answered. Further, some of the puzzles are logically absurd as well as timed, a device that pushes playing time closer to 10 hours.

So….graphics, setting and atmosphere fail to rescue a seriously gameplay-flawed effort from mediocrity. Largely peculiar puzzles in an essentially non-interactive setting as regards other persons, all moving towards an unfathomable ending bring down what could have been an intriguing game. Recommendable only to devoted fans of Bilal’s works.

It’s Not Just Black and White