Today is my birthday – thirty-six, if you must know – and my brother Marcus (whose fifth novel comes out on June 9, don’t forget!) loaded me down with a mountain of treasures, including CD Projekt’s latest, The Witcher 2: Assassins of Kings. I own the original Witcher, on account of a Steam sale, but I never got more than ten minutes into it. Many a positive review of this sequel landed it on my List of Things to Play, so I’m grateful to old Marquez for his gift. I’ve been in need of an RPG since I lost interest in Dragon Age 2.

That’s a good place to start, actually, comparisons to Dragon Age. The two games are very dissimilar. Whereas DA is a tactical exercise, lots of pausing and contemplating of orders, The Witcher 2 is action-packed, even moreso than its predecessor. You roll, you dodge, you parry, you cast, and you do it all in real time. This unabashedly for-the-PC RPG integrates a hardcore, reflex-intensive combat model with a traditionally stat and inventory heavy dynamic that should appeal to all but the most slowgoing of players.

I’ll just say: The Witcher 2 is hard. It’s really hard. You will die constantly as you get the hang of the game’s unforgiving combat, and you’ll become very close with the Quicksave key. Death during the tutorial isn’t something we typically see – it’s a tutorial after all, it’s supposed to hold your hand – but die you will. It’s not frustrating. In fact, so far The Witcher 2 lives up to the positive reviews in every way. 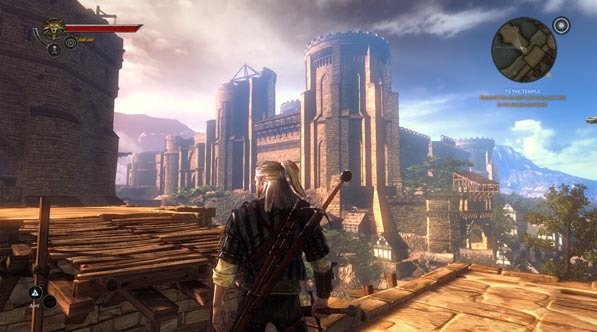 Once again playing as Geralt of Rivia, the monster-hunting hero of Polish novelist Andrzej Sapkowski’s Witcher saga, you find yourself in a gritty, scarified, filled-with-nudity fantasy world of asshole kings, terrifying monsters, gallons of blood, hot chicks, and violence galore. I’ve not read any of the Witcher novels (I’ve got one on the Kindle, though, it’s in line), and not having played the original game, I was a bit lost at first. Geralt knows a lot of people I don’t. But as time goes on it becomes clear that playing the original Witcher is quite optional; like all huge-world RPGs, this one is disorienting at first and it takes a few hours to get a feel for the place.

Eastern European developers have a long love affair with the PC, and its from this region that you’re most likely to see PC-only games. The tradeoff for a smaller market share is that designers can take advantage of the inherent superiority of a gaming PC, and The Witcher 2 is no exception. All around you are signs of a very handcrafted world. You’ll see little or no repetition of objects or textures here, and the whole place is loaded with ambient dialogue and background action that brings the world to life. CD Projekt’s decision to open the game in a busy military camp getting ready to launch an assault on a besieged city allows them to show off the best right away – as you run around trying to figure out where stuff is, trebuchets creak and rumble, soldiers drill, sergeants curse their recruits, pikemen play a last game of dice, camp followers gossip. Once the assault begins in earnest there’s little time to stop and admire the background activity, but it’s all still there, and you’ll sense it even if you can’t absorb every second. 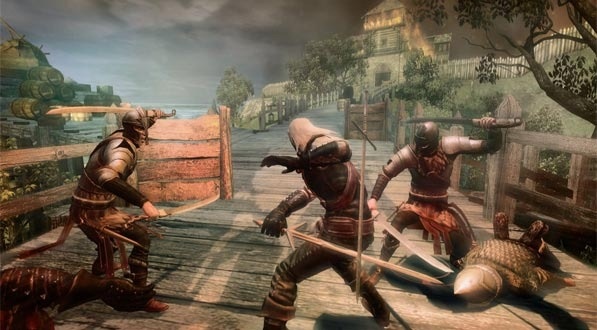 Combat is quick, busy, and brutal. Gone are the click-and-then-click-again battles of the first Witcher, here we see real-time combat that demands a lot of skill to master. Dodging and blocking are as crucial to Geralt’s survival as a strong sword arm, and once you remap those controls to thumb buttons on your mouse you’ll be better off. Even then, it’ll only take a few deaths before you start quicksaving between every battle.

What impresses me most is that the combat, though hard, isn’t frustrating. Unlike Dragon Age 2’s obnoxious camera, it’s rare here to not be able to see what you need to see, and you’ll learn to apply tactics such as drawing individual enemies away from their friends to avoid getting ganged up on. Plenty of reloads may be in your future, but the bloody, brutal combat choreography and general sense of awesomeness takes any edge off the frustration. There are instances where the controls don’t react quite as fast as I’d like, but this is a relatively minor issue. In most cases the game ignores you if you try to switch actions in midstream – if you decide to block halfway through a roll, for example. It might bug some people but ultimately it’s just realistic.

The game does little to introduce sound tactics, preferring to let you muddle through on your own. At 1680×1050 the tutorial windows are a little hard to read and disappear too fast anyway, but it’s all stored in your journal for later review. Similarly, the game makes no effort to explain the magic runes Geralt uses, or even how to drink potions or improve his stats, until comparatively late in the tutorial. The Witcher 2 strikes me as a game that wants you to figure out how to play it, and the result is that when you do, you feel all the more awesome for having bested its challenges. 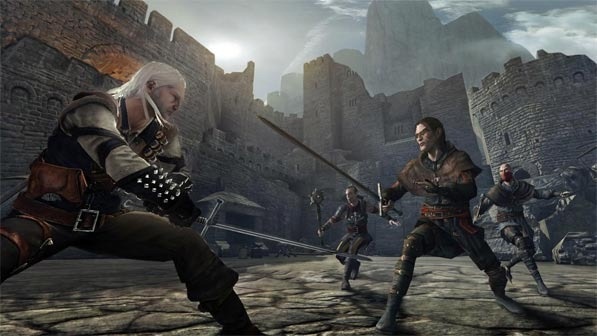 CD Projekt’s proprietary Red Engine is simply stunning. At the game’s suggestion I turned down a few of the more graphically punishing items, but most of the features are maxed out and I’m getting plenty of frames even in very busy sequences. It’s funny that The Witcher was criticized for long load times and bad performance, because you see none of that in this sequel. The only technical complaint I can come up with is that you can’t map your keys within the game, and it doesn’t explain what some of the high-end graphic features do, or what you’ll be missing if you turn them off. You’ll just have to experiment. It’s interesting, though, that some of the most traditionally punishing features – Screen Space Ambient Occlusion is an example, most gamers turn it off as a matter of course – don’t affect the frame rate much at all. Signs of a well-optimized engine from a tech team that knows what it’s doing.

If you’re a roleplayer who doesn’t mind action-heavy combat in your games, you can’t go wrong with Assassins of Kings. It’s well-written, well-localized, well-optimized, and blisteringly fun to play. The game world gives us a new perspective on the fantasy genre without carrying it too far, and the storyline promises a complex, nuanced adventure that I, for one, am eager to get back into. Check it out.

33 Responses to First Impressions: The Witcher 2

The Legend of Zelda: Twilight Princess