2007 seems so long ago. That was the year THQ and GSC Game World finally released the absurdly ambitious open-world shooter S.T.A.L.K.E.R.: Shadow of Chernobyl. It surprised us by being phenomenal. Broken, incoherent, and phenomenal. Released after six years of troubled development, it was a heavily redacted copy of the original vision – more than 50% of the game was cut – but even in its mangled state it was a landmark in the “future of shooters is RPGs” concept. To this day nothing has quite replicated the feel of your first time. And throughout it all rumors persisted, about the STALKER that they’d intended.

Welcome to the Zone that was. Welcome back, to a place you’ve never quite been.

By 2009, GSC Game World was doing well. No one – least of all its employees – would have suspected it was already on a collision course with oblivion. Development on Call of Pripyat, the third title in the STALKER franchise, was underway; it would ship on schedule. Their reputation centered around their art direction and innovation in shooter design, not the endless development cycle of STALKER’s first installment. The only casualty had been the relationship with THQ.

But GSC had evidently not forgotten the ambitious early designs for STALKER, which had been in development for about four years before their now-estranged publisher finally did the right thing and jerked the studio’s leash. Shortly before Call of Pripyat shipped, GSC Game World rummaged through its vaults and unearthed Build 1935, a functional – if very rough – STALKER alpha from 2004, which is to say just before the big cuts started being made. 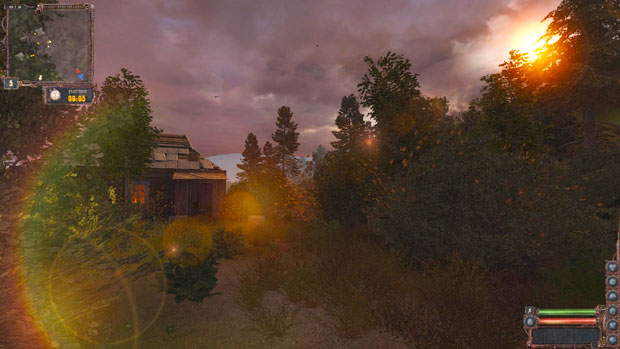 This is the Rookie Camp now. Things change.

Build 1935 was released mostly as a point of interest, a toolbox of resources for the vibrant STALKER mod community. It was many things; one thing it was not was readily playable. I got it to run easily enough five years ago, but it was clear that was as far as I’d be going. I don’t speak Russian, for one thing – other than da and nyet and borscht – and it was an alpha in the real sense of that word: it worked, but huge chunks were missing, huge other chunks were there but didn’t work, and there was no possibility at all of enduring it as a “game.” So I burned it to a DVD and forgot about it, figuring that eventually some enterprising mod team would get it into working order.

Enter S.T.A.L.K.E.R. Lost Alpha, released a couple weeks ago. It’s a combination of Build 1935 and original work from the mod team Dezowave, and like the foundation on which it’s set, it’s both immediately recognizable as a STALKER game and immediately different. For students of the iterative processes by which games are designed, Lost Alpha is an interesting specimen indeed, an ogres-are-like-onions pastiche of names, locations, and quests that any STALKER fan will know well, sandwiched between stuff that might seem, at first, completely new. 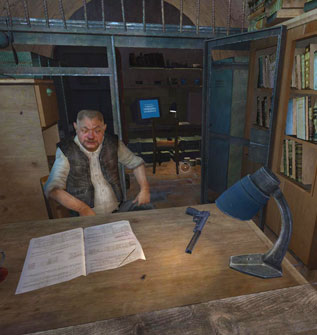 Everything that’s old is new again, sort of.

Walking out of Sidorovich’s bunker for the first time is one of those shared STALKER experiences we all remember. The Rookie Camp – called “Newbie Town” by its residents – is maybe forty yards ahead. To the left, over a small rise, is a weird dried-up lake bed that shimmers and hums with unearthly Chernobylishness. In the Lost Alpha it’s all there, but the look and layout are very different. The X-Ray Engine sports different lighting and physics algorithms but is otherwise more or less the same, though the level of detail lavished on the terrain is impressive for today and would’ve been absurd for 2004.

Instead of starting you out with the ridiculously hard “Save Nimble” mission, Lost Alpha throws a couple of softballs first, giving you the lay of the land and introducing you to some of the environmental dangers before anybody starts shooting. You find an artifact for Sidorovich in that funny lake (not dried up here, and more of a fen; it shows off the dead sexy water technology abandoned by the shipping game), which teaches you about anomalies (mobile, almost invisible, and far more unpredictable than you remember); about artifacts (tiny and easy to miss among Lost Alpha’s generous tall grasses and waving shrubbery); and about the economy of the Zone. You track down a missing courier near some abandoned train cars, which teaches you to fear the military, with its ubiquitous attack helicopters and shoot-first attitude. You get a look at a herd – not a couple, a motherfucking herd – of Flesh, those terrifying pig-dog-rat things that populate remote areas of the Cordon. You explore a much larger and more dilapidated Rookie Camp, and you meet Wolf, who runs it.

Then you go rescue Nimble. Not in a smallish car park but in a sprawling factory complex, accompanied by a couple of Stalkers who spend most of the time hiding and thus likely survive the encounter, unlike the suicidal guns-blazing cowboys of their publicly released twin. 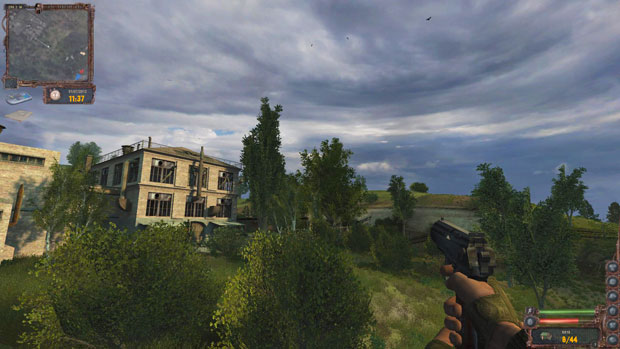 Nimble’s being held in a big hydro plant, not a little tractor park. Oh, and he’s also already dead, but you shouldn’t blame his captors for that. In STALKER you have to watch where you go.

By now you feel the Zone as you felt it in STALKER, and you can’t help but think that Lost Alpha might allow the impossible: it might let people visit the Zone again for the the very first time. Practically everything is there, but none of it is precisely the same, and in most cases the differences are profound enough that Lost Alpha’s very nearly a different experience altogether. I’d go into more detail, but for those interested in trying the Lost Alpha out, the less said the better.

The Zone Take Me if I Do 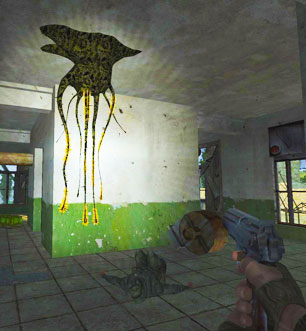 I could be accused, reasonably, of publishing impressions too soon. We don’t have rules about it, and personally I use the category to show my early reactions – sometimes very early, and sometimes I live to regret that, because sometimes my early impressions are radically different from the long view.

Where my impressions of Lost Alpha might fall down is in my early assessment of the game’s solidity. STALKER was never very stable, never very well-polished, and neither were its successors. It stands to reason that an ancient, broken alpha propped up by the mod community would reflect that, but all in all Lost Alpha strikes me as rock solid. The Dezowave team has done a remarkable job with their translation, their work on the A-Life Artificial Intelligence system, and their rampant hole-patching that converts Lost Alpha from an unplayable oddity to what appears – at the outset, at least – to be a complete game. The four hours or so I’ve spent with it have me still in the Cordon, struck by how much was cut from Shadow of Chernobyl and delighted every time I see a new path or location that wasn’t in the game I know, or something I remember well but that’s slightly or significantly different. It all combines to make me feel like I’m playing something entirely new all over again. 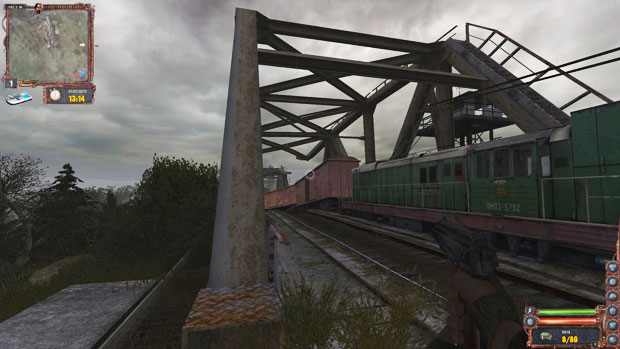 Some places, like the rail bridge, look familiar – but appearances can be deceiving. Trust me.

For all that’s changed in Lost Alpha, only the supernatural elements should strike veteran Stalkers as really out of character compared to the Zone they know. The early builds of STALKER were much more sci-fi flavored, and the sense of the Zone as being haunted or otherworldly was more explicit than implied. While I generally preferred the harder science fiction presented in Shadow of Chernobyl, the world on offer here is tantalizingly alien, calling maybe for more suspension of disbelief, but otherwise not much different from the Zone presented in Shadow of Chernobyl.

Most importantly, it retains the difficult-to-describe Zone “flavor” that captivated players in the first place. Huddling beneath the vast, slow weight of the Zone’s eerie self-awareness, its fathomless secrets known but unpunctured by direct experience, makes this pilgrimage something every die-hard STALKER fan should undertake. It’s like going to a place you know well from a dream (or maybe dreaming about a place you know well in the real world). And unlike the troublesome Build 1935 on which it is based, the Lost Alpha strikes me as something with a stable arc, something playable and functional as is… the S.T.A.L.K.E.R. game we were never meant to see. 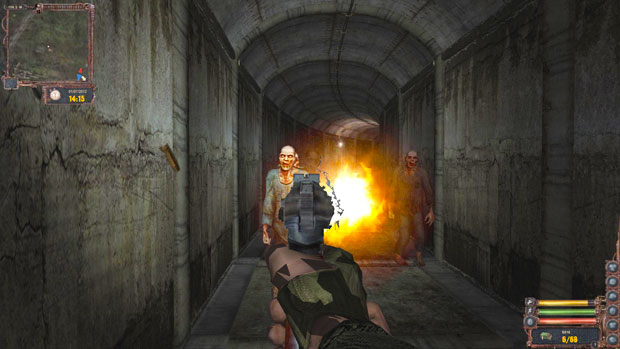 A big network of tunnels spiderweb out underneath the entire Cordon – be careful you don’t get lost in there. Some things are best left buried.

When they released Build 1935 in 2009, GSC Game World was finishing Call of Pripyat and getting development of S.T.A.L.K.E.R. 2 underway. There were novels and tie-in products. There was talk of a S.T.A.L.K.E.R. television show. And then, in one of the weirdest and most mysterious events the industry’s seen, the studio abruptly shut down, leaving no one more surprised, I suspect, than its bewildered staff. Most of them went on to form Vostok Games, now working on the STALKER-esque MMOFPS Survarium, but we all assumed that the true STALKER had run its course. Now, thanks to what appears at first blush to be some really good work by Dezowave, that need not be the case. Chernobyl awaits… again.

Download the standalone install of S.T.A.L.K.E.R. Lost Alpha at ModDB. More information on the mod can be found at Dezowave’s site.

Say “Get out of here, Stalker” by clicking steerpike@tap-repeatedly.com.