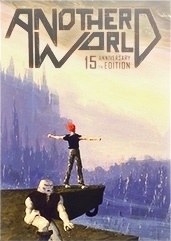 “Chahi’s opus is short but sharp, often painfully sharp, but beyond its unforgiving difficulty and relatively simple gameplay lies a unique and enthralling experience that the 15th Anniversary Edition brings bang up to date. An old favourite and as affecting now as it was in 1991.”

It was many, many otherworldly moons ago that I played Another World. I must have been around nine years old when I first played it and I’m not entirely sure how I discovered it at that age. It was most certainly a pirated version so I must have found it amongst the many bags and boxes of copied games me and my brother had back then. Nevertheless, Another World remains one of the most important games of my formative years. Industry veterans like Kojima, Suda, Mikami and most notably Ueda — whose Ico, and by extension Shadow of the Colossus, come closest to capturing and really understanding the feel and less-is-more design of Another World with its luminous sense of place, its emergent companionship amidst solitude and alienation, its measured aesthetics and limited exposition — all cite Another World as hugely influential, although I’m not sure how the hell Kojima fits into all that. Naturally when I saw the 15th Anniversary Edition going for 60% off at Good Old Games — a version I’ve wanted to play for a long time — I snapped it up in an instant. So yeah, you might want to add that to my list of insta-buys too. 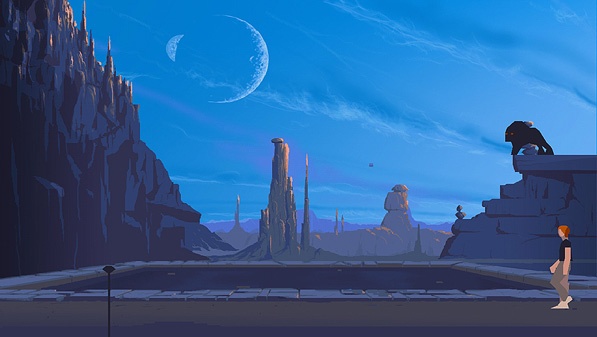 In Another World you play as Lester, a scientist who, against all better judgement and common sense, decides to fire up the particle accelerator/collider at his laboratory during a thunderstorm. He must’ve missed the weather forecast. Needless to say his sorry ass is inadvertently transported to — you guessed it — another world; one fraught with danger and likely to reduce his life expectancy by roughly 100%.

Originally released on the Amiga in 1991, Another World was programmed, designed, illustrated and animated by Eric Chahi and scored by Jean-Francois Freitas under Delphine Software International. An action adventure through and through, it was a landmark title and I suspect lauded mostly for its beautiful, measured aesthetics and strong cinematic quality, the likes of which hadn’t been seen before in gaming. In a time where games looked like games — with their cluttering HUDs, high scores, over-zealous sound effects and music, unreal characters and modular copy/paste worlds littered with artificial pick-ups and pedestrian enemies — Another World was a breath of fresh air. It had no HUD (or even a GUI) to speak of, there was no music other than that of the intro and outro (okay, and that scene at the top of the tower), sound effects were sparse and ambient, and Lester was just an average guy in the wrong place at the wrong time.

Another World gave the impression of realism with its loose and expressive visual style; the environments were muted but expansive with their limited colour palettes and striking compositions, suggesting much more beyond the frame; the characters and creatures were low in detail but impressionistic and fluidly animated, embellished with moments that breathed life into them like the alien beast stalking the cliffs in the distance after seeing Lester pull himself out of the pool (see above), or your newly acquainted alien friend patting you on the shoulder, saying something in an alien tongue and gesturing to follow him. It was mesmerising to the pre-teen me and even now still holds its own thanks to the higher resolution support, enhanced backgrounds and remastered sound of the 15th Anniversary Edition. I must admit, I wasn’t entirely sure of the higher resolution at first, thinking that it revealed flaws in the polygonal artwork that makes up the characters, creatures and cinematics, but as I played more I became accustomed to it and found it difficult to revert back to the 16 colour 320 x 200 resolution (gasp) of the un-enhanced original. It’s also a testament to the quality of the original’s sound (at least the Amiga version’s, with its infamous sound reproduction) that certain effects have been reused and enhanced rather than being outright replaced. I will say however, that there is one particular scene where a fisticuffs sound effect simply doesn’t cut it and somewhat undermines the severity of the situation. The backgrounds themselves have been sensitively updated, retaining and building upon the wonder and spectacle of the original’s. It’s remarkable just how well the essence of Another World has been kept intact.

Having said all this, on the gameplay front Another World was notoriously unforgiving; it was quick to kill you, scant with checkpoints, and often the experience boiled down to trial and error, with little or no clue on what to do next. I can safely say that, aside from the more frequent checkpoints, the 15th Anniversary Edition remains every bit as punishing. The only semblance to a hint system is that checkpoints aren’t created unless you are doing things in the correct order so if you find that you’re having to trudge some distance after you die then there’s a fair chance that you’ve missed something. I found this out the hard way after repeated long distance deaths.

And dying is something you’ll do a lot of in Another World. Most of it is unavoidable on a first playthrough simply because you’re rarely forewarned. Thankfully, Another World will kill you in the most entertaining and colourful of ways. Well, I say entertaining: try telling the nine year old me that Lester being beaten to death was entertaining and ‘colourful’. Lester will be poisoned, slashed, eaten, beaten, disintegrated, drowned, impaled, scolded, crushed, blown up and I’m sure there are others that I’ve missed. So, fun for the whole family then. Most of these deaths have their own unique and unsettling animation which partly explains why I remember them all so vividly. They’re cold and unglamourous — Lester just pitifully dies. It doesn’t fade to black, there’s no death jingle or game over splash, it just cuts straight to a no-frills, functional ‘Press any key to continue’ screen. Instant deaths are an intentionally vital part of Another World — as much as they were in Eric Chahi‘s Heart of Darkness — reinforcing the vulnerability of the protagonist and their dangerous environments. Without them I’m not sure either game would be quite the same. 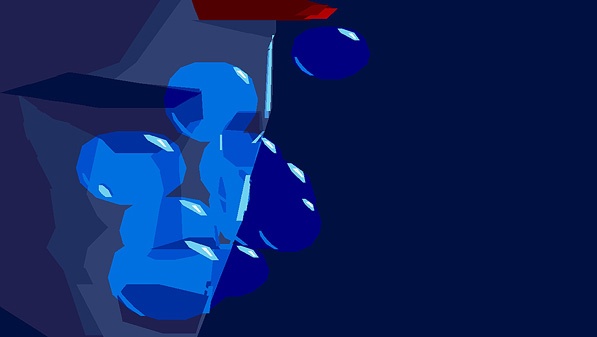 Shortly after the first scene Lester acquires a very neat laser pistol which proves instrumental in his journey. The pistol, in addition to its punchy standard laser fire, has the means of providing a temporary force field capable of protecting Lester from enemy fire (of which there is plenty) and can also be used as a high powered blast cannon capable of destroying doors, other force fields and certain walls (this makes an incredible noise by the way). A number of the game’s action sequences involve juggling these three uses; placing a force field, blasting through the enemies’ and returning fire. This is much trickier than it sounds and when confronted by enemies on both sides can be a pain in the arse. As a touch of realism, laser fire doesn’t always hit either, whether it’s the enemies’ or Lester’s, so invariably there are moments where you’ll shoot, miss, and be hit back. These moments are rare but at certain junctures they can prove particularly testing, albeit highly satisfying thanks to the snap, crack and skeletal disintegration crumble of a successful laser strike.

Another World, through gritted teeth, remains a compelling experience for the same kinds of reasons mentioned earlier: its a visual and aural feast supplemented by some fantastic cinematic sequences that are still involving despite how limited your interaction is. Perhaps most notably, towards the end I came across a fantastic palatial sequence that I just couldn’t remember from the Amiga version. At first I put this down to it being nearly 20 years since I last played it, but it transpired that the sequence was integrated from a later version developed for a different format. It’s a seamless and perfect addition that helps flesh out the latter part of the game which, before, ended a little abruptly after the city. 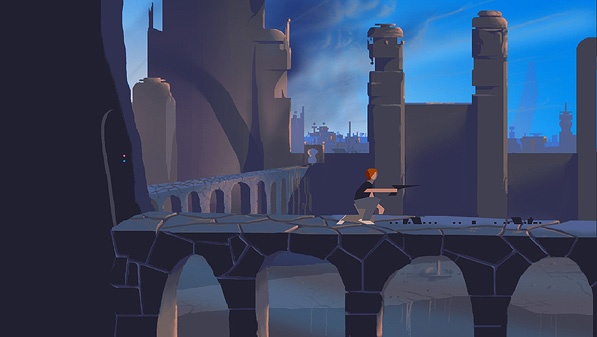 And that’s the thing, Another World, when all’s said and done, is relatively short and can be completed within an hour if you know what you’re doing, but the numerous difficulty spikes will try their damnedest to keep you back. Some may see this as artificially lengthening the game and I’d have trouble contesting that, but Another World is far greater than its unflinching difficulty and three digit death toll. It’s unique, heartfelt, beautiful, intimate, visceral, visionary, understated, inspirational and ultimately timeless. In a world where games provide all sorts of safety nets and prompts to gently nudge the player in the right direction, Another World stands stoic and proud, shamelessly kicking your arse but drawing you in with the promise of what’s around the next corner.