You’d be forgiven for saying
that it is crazy to compose
a game review in ballad form
instead of customary prose.

But Child of Light is something special,
artful, thoughtful, moving, deep;
indie in style and demeanor,
whose gameplay will your attention keep.

Instead, Child of Light is the whole package.
It tells a story bittersweet
of a young princess named Aurora
lost in the land of Lemuria, and of the tasks she must complete.

At first, Child of Light looks like a platformer
of simple and practical means.  Little Aurora
runs, jumps, and climbs clumsily
across the landscape of Lemuria.

Aurora is joined by Igniculus the firefly,
who follows the mouse with his flight.
His illumination can stun enemies, solve puzzles,
and reveal secret pathways on which he sheds his light.

Soon Aurora finds a sword with which to defend
herself.  From here her quest truly begins. 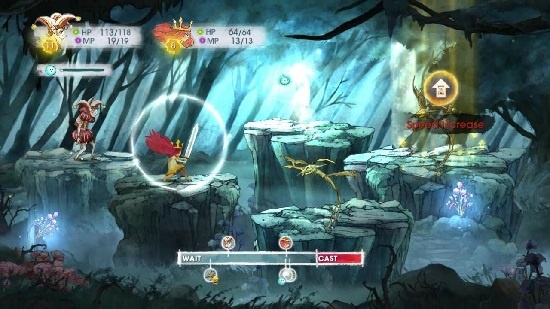 Combat is a turn-based affair,
two versus three at the most;
it is the JRPG style simplified and distilled,
but with enough depth to keep players engrossed.

Each character can attack or defend,
or select from unique skills and spells.
The crux, though, is the interruption mechanic,
a dangerous pitfall, but a strategy as well.

See, characters move along a timeline,
each according to their speed.
On their turn they choose an action, but
each action takes some time to succeed.

If a character is struck by an attack
while in the midst of casting, they
will be knocked back along the timeline,
their action interrupted, their progress thrown away.

Characters can defend, however,
which will briefly protect from interruption.
Timing becomes everything
in order to avoid disruption.

Now, Igniculus can help here, too:
he can heal allies or enemies delay.
This ability is a limited resource,
slow to recover, and critical to successful play.

Aurora is joined by a colorful cast
of characters to aid in her quest.
Each has their own story and skills to contribute,
and can switch into battle on the fly to give others a rest.

There is Finn the magician, and Robert the archer,
and Oengus, once a guard for the Dark Queen’s regime.
Norah, whose buffs and debuffs prove invaluable,
and healer Rubella, who doesn’t get the rhyme…pattern. 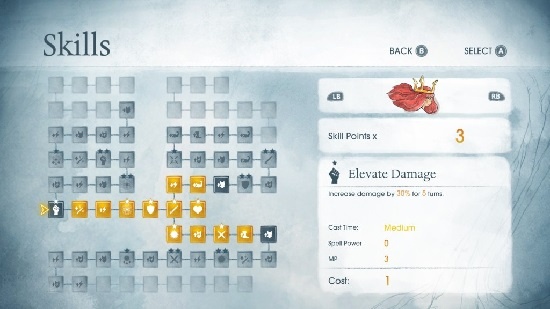 Add skill trees for leveling, and gems to combine
for extra mechanical clout.  It’s mostly familiar
but so tightly done,
and simple enough for beginners.

What seems a sweet tale of a girl in a dream
is truly a bit melancholic.  Each
character copes with disappointment and loss,
and with the harsh lessons they teach.

The story sticks with you, the good and the bad,
but the game is not lost in the tale.
Child of Light is both fun and affecting
and a great value for its scale.

Child of Light is all it should be, a charming experience delivered:
a superb title, all things considered.

3 Responses to Child of Light

Side by Side: Affordable Space Adventures