I arrived at PAX East 2014 on Friday morning. I didn’t make any specific press appointments this year and my schedule for panels was pretty sparse. I walked into the convention center with an open mind, wondering what would grab my attention.

At first I felt overwhelmed. The expo hall at PAX East was as loud and boisterous as ever, with the big players occupying noisy booths and holding tournaments and giveaways. The lines to try things or watch panels or hear music were just as long as every previous year. This year, tickets for PAX East sold out in record time. Maybe that is the rationale for PAX announcing another show – PAX South, in San Antonio, Texas. They just weren’t reaching enough geeks.

Then, however, the underwhelm crept in. There were fewer of the big players here in 2014, and fewer interesting announcements than previous PAX shows. Perhaps no one has anything new to announce this year, or they have new announcements, but PAX East isn’t the right venue for them. Twitch TV might also be a factor for some companies. Easy internet streaming has made it simple for companies big and small to reach gamers on their own timetable, without having to wait a big show where it’s so easy for messages to get lost in the din.

People are also uneasy about PAX now. Whenever anyone mentions an intent to go to PAX, there’s always the question of whether it is worth it to support its increasingly controversial creators. Though the Penny Arcade crew has stated they’re interested in distancing themselves a bit from the show and cleaning up their act, it’s a point of contention for many attendees and partners. Maybe there will be enough vendors and enough game companies and announcements to go around in January when the new show launches. Maybe the controversies will finally stop stinging, or maybe the San Antonio audience just won’t care. For now, we have PAX East 2014, and this is what it was. 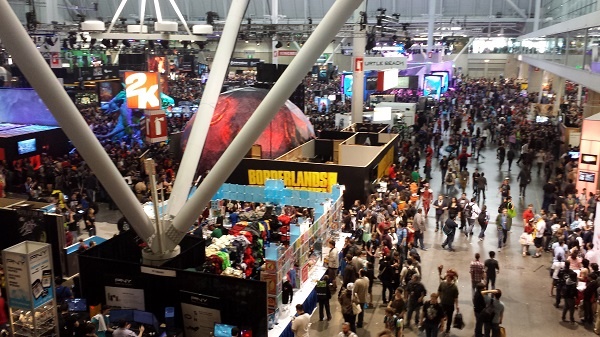 A huge part of the expo floor was dominated by MOBAs this year. There’s more coming out than you could know what to do with, and they occupy a tremendous amount of space. There was Dawngate and Infinite Crisis and Heroes of the Storm, all huddled around League of Legends with huge banks of computers and tons of noise. People near the Handheld Lounge were getting their faces elaborately painted: turns out  to advertise Strife, another MOBA.

On Friday Alex Rigopulos, from Harmonix, gave a great keynote about his work and the rise and fall of the plastic gaming guitar. MOBAs might be a new genre like the FPS or MMO, here to continue to entertain gamers for years to come. Or, they might be the next plastic guitar. As someone not deeply entrenched in the genre, I’m a bit skeptical of it. MOBAs have a high learning curve and communities that can be notoriously toxic to outsiders. More crucially, it’s unclear how so many similar-looking games are going to differentiate in a suddenly-crowded marketplace. Infinite Crisis has the advantage of DC branded characters, and Heroes of the Storm has the backing of Blizzard. No doubt the bigger players like Riot are going to do well, but for the rest, it’s tough not to see this as a cash grab. 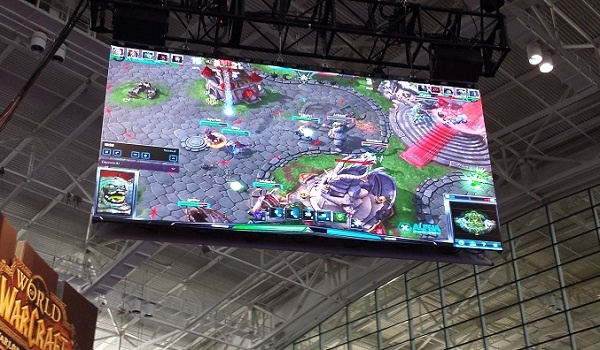 For those uninterested in MOBAs, there was little else on the AAA side of PAX East’s floor this year. High end hardware sponsored several booths, but they occupy a weird space in the ecosystem now. The highest end graphics cards don’t make sense for the majority of the games being demoed elsewhere at the convention, so some fairly well-worn popular shooters were running on the newest hardware instead. Lots of the games on the floor at PAX were games I already have at home. I liked the premise of Soul Suspect when I heard it, but only because Ghost Trick was so goddamn good. I used to be excited about Watch Dogs, but like a lot of gamers, lost interest in it when I saw how rough it looks in the newest trailers.

Of course, that doesn’t mean there’s no hope for video games. It just means we have to look elsewhere.

Behind AAA on the big floor was the Indie Megabooth. Most of the press releases I received this year were from these indie developers, all doing great things and all hoping for the press’s attention to make their great things more visible. The Megabooth started out as a small initiative for developers that couldn’t afford a full exhibit space. Now it’s an enormous section of the con in its own right, sporting around 90 different games and their eager developers. There’s a lot there to take in. 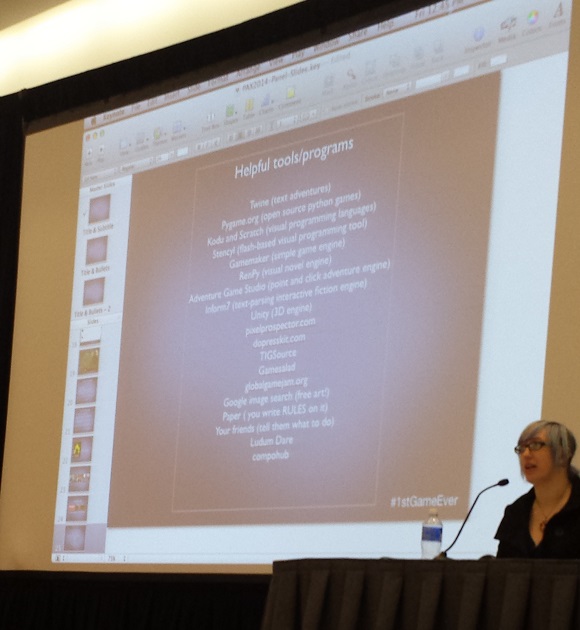 At a talk on Friday a few developers, including Depression Quest’s Zoe Quinn and Vlambeer’s Rami Ismail, showed off their very first attempts at creating games. They also showed off a lot of different methods others could use to make their very first games. But everyone on the panel encouraged people to make games out of love, and because they want to, not because they’re hoping for money or success. The field is very crowded.

But there is a lot more variety in indie, and the small players this year are still exciting. To me, the most interesting stuff in video gaming was going on not just at the Indie Megabooth , but at the Indie Mega Minibooth, where indie game developers too tiny to buy out full Megabooth space banded together running one screen apiece of all of their latest prototypes. 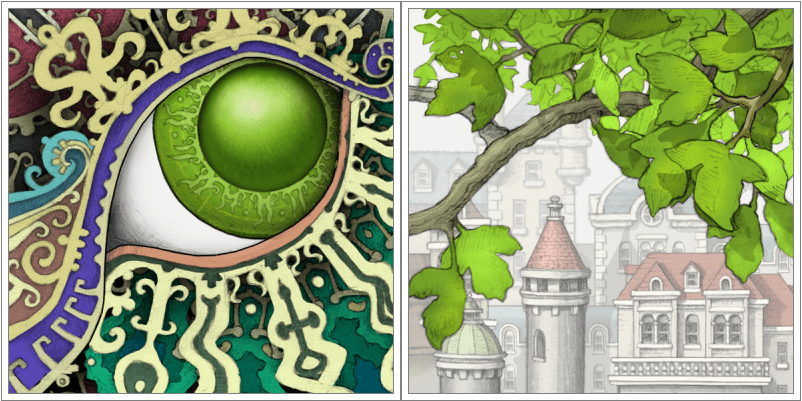 Gorogoa, a hand-drawn puzzler which I saw demoed at Experimental Gameplay at GDC and tried myself on the show floor, is a stunner, though a bit too slow-paced and contemplative for a convention environment.  Chroma Squad is a fantastic-looking strategy RPG where the player is the manager of a sentai team – and the show that the team stars in. Game Oven was at PAX demoing Bounden, another Experimental Gameplay game that is an entirely new take on the dance genre and includes choreography from the Dutch National Ballet. 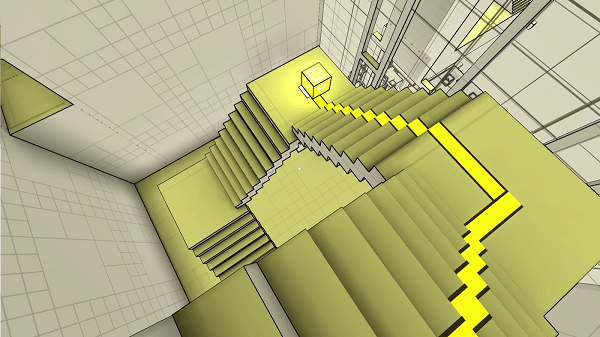 The team behind The Bridge has a very different game this year in Tumblestone, a competitive color-matching game. But on the Escher puzzle front, developer Willy Chyr is creating a game called Relativity, a 3D gravity flipping puzzler that hopes to live up to some of the promise of Antichamber. Christine Love had a booth showing off Hate Plus, as well as her Interstellar Selfie Station utility that takes photographs reminiscent of the old Game Boy Camera. 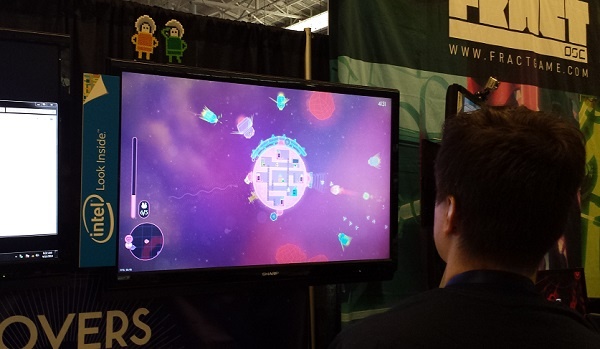 Some of the games I’ve seen at GDC or IndieCade are finding a broader audience here at PAX as well. Lovers in a Dangerous Spacetime is a part-shooter, part-platformer where two co-op players work to pilot a neon pink spaceship through a hazardous universe. I was impressed that the game that I saw could even live up to a name so evocative. Crypt of the Necrodancer was at the show, a game where a dungeon crawl is mediated with deep-throbbing techno music, and controlled with customized dance pads. Indies also use a wide variety of hardware: not just the dance pads of course, but touchscreens and iPhones and Oculus Rifts.

The indie games are diverse, their hardware is diverse, but what about the audience? Efforts were made; results were mixed. There was a special challenge in finding a ladies’ room at PAX East this year, as multiple women’s bathrooms had been converted to men’s rooms. The city has officially declared this necessary because the audience for the convention still skews so male. 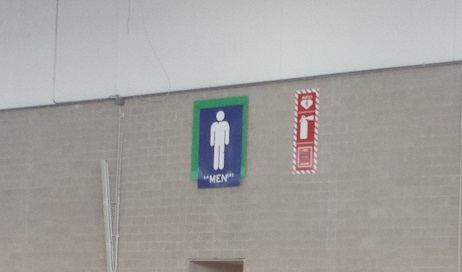 There was also the gender neutral bathroom, which was positioned down the hall from PAX’s controversial “Roll for Diversity Lounge.” Envisioned, supposedly, as an outreach measure, this quiet room was reserved for the “diverse” vendors and has been renounced on the internet as “the diversity ghetto.” I checked out the lounge, but I wasn’t convinced it filled its ultimate purpose. It seemed like the point was to keep LGBT interest groups out of the eyesight of the conventions’ many attending children, who could of course easily stumble across graphic violence on the main floor.

The option remains to just be someone else, in the form of cosplay. There are still some great costumes at PAX, though there were a few common themes. I have never in my life seen so many quantities of Deadpools. Mass Effect held a huge cosplay event this year, inviting multiple game models and voice actors to interact with the fans. 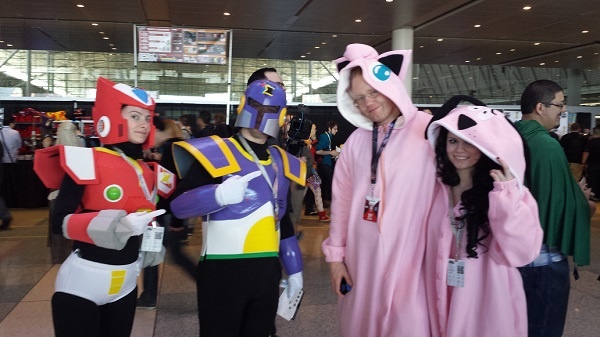 There were a few cosplay-focused lounges, in addition to the diversity lounge. There was also the “AFK” lounge, designed to get help for people who felt they were experiencing harassment or anxiety. Volunteer psychologists were on duty. Meanwhile, a panel aimed at gamers with anxiety or depression was packed to capacity on Saturday. It’s a strange situation for a convention who once sported the tagline “Welcome Home.” It feels too tense somehow, to be at home here.

Downstream from the sky bridge on Saturday morning I walked up to a sign, searching it for a particular theater. A young man next to me asked, where are the swag bags? They’re here, I said, pointing to a space on the map. You will go down to the basement floor, you will walk through a long peopleweaver, you will wait in a line, and when you get to the table, there might be swag there, or there might not be. This experience, to me: the waiting, the uncertainty, through many years of this convention, that is still the raw essence of PAX. “Oh, you’re media,” he said, with a glance at my badge. “Don’t forget to talk about the cool kid that was lost.”

But as hokey as it was, that’s one thing I felt in solidarity with so many congoers on that Saturday. In a way, we were all the cool kid that was lost. Looking for swag, or for some affordable food, or for just the right T-shirt, or for the media room, or for the ladies’ room, or for some kind of meaning in all the patchwork din. There is still enthusiasm and creativity here for those that seek it, but the maps can be a bit hard to read.

AJ Lange does not have any extra skin codes for LoL this year. Sorry. You can email her at aj@tap-repeatedly.com.