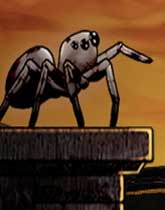 Review by Steerpike
Spider: The Secret of Bryce Manor

“Spider is a platformic puzzler that benefits from exquisitely tuned controls and a surprising depth hidden in the world, for those who take the time to look. It’s also a wonderful game.“

Vacuum cleaners that are too loud. Losing my hands. Those beetles with the clippers on their tails. Algae and other slimy aquatic plant life. Food poisoning. Intestinal parasites. Extreme public humiliation. Spiders.

Why, then, play a game in which I must become my mortal foe? Some say to overcome a fear you must embrace it, but I’ve played all the way through Spider: The Secret of Bryce Manor, and I’m still on the chair if there’s a spider on the floor. Not my most manly trait, but hey, if we started toting up my unmanly traits, we’d be here for a long, long time.

I grabbed Spider off the App Store because it was made by Tiger Style games, Randy Smith’s new company. Randy (designer on all three Thief games at Looking Glass and, later, ION Storm) is a good guy and a very talented designer. Until recently he was working with Steven Spielberg and some other Looking Glass alums on a secret game project code-named LMNO, but EA seems to have put the brakes on the job and Randy moved on to start Tiger Style. Spider, his first handheld outing, is a platformic puzzler that benefits from exquisitely tuned controls and a surprising depth hidden in the world, for those who take the time to look. It’s also a wonderful game.

Up the Water Spout

In Spider, you’re a spider. Sort of an isty-bitsy one, as spiders go, but you’re one of those jumping spiders that can fling itself around like a cricket. Your job in the game is to spin webs and trap bugs, then eat them.

What, you were expecting 1,000 words on gameplay? It’s a spider simulator. That’s what spiders do.

Here’s the thing, though, and I command you to give it added weight because I’m afraid of spiders: it is awesome being a spider! There is a kickass weightlessness to the jump controls – managed with a flick of your finger – that is reminiscent of Prototype or Crackdown, games where the jumping was half the fun. Being a spider you can stick to most surfaces, even upside down, and a light finger touch on your intended destination guides the eight-legged protagonist there. Tap your spidery buddy and then jump to spiral out a strand of thread, connecting them at corners to form webs. Stupid insets like lacewings will happily blunder right into your web, but larger and more cautious ones require some herding – or, in the case of hornets and dragonflies, a flying tackle. The small touches, such as the ability to attract moths with light and the need to methodically drive slow-moving butterflies into your webs, add a layer of strategy beyond simple geometric weaving.

None of the insects, nor the environment, can harm you; however, you have a limited supply of thread and if you run out, you have only a matter of seconds to consume a bug and replenish a bit of your supply before you go legs-up. Thus Spider is essentially a puzzle game: as you move through each level, you must be judicious in where you spin your webs. Moreover, later levels feature many surfaces that you cannot crawl on or attach webs to, adding to the challenge. So long as you keep eating, you’ll have plenty of thread with which to festoon the entire game, and the more webs you spin, the easier it is to lure unsuspecting insects and then slurp the juices out of them.

In general Spider controls better than any iPhone game I’ve yet played, and your spider moves with such spidery spiderness that it seems almost mocapped. The simple elegance of the controls add to what’s already a charming experience. The worst I can say about the controls aren’t the game’s fault: that is, it helps to have dry fingertips when playing, since much of Spider calls for laserlike precision when laying web foundations. It’s not the kind of game you can easily play after eating a bag of chips. You’ll want clean, dry paws.

Come into My Parlor

An interesting aspect of Spider is how self-referential it is; the subtitle, you’ll note, is The Secret of Bryce Manor. There is a manor, Bryce Manor in fact, and it has a secret. But you’re a spider, you don’t care. You’re not some special intelligent spider, you’re just a regular one. This is not an arachnid Bad Mojo. I don’t know if spiders even have brains, but if they do, they’re not complex enough to wrestle with family tragedies and estranged lovers and the secrets that manors keep. That stuff is for we humans.

Spider’s beautiful, hand-painted levels each hold many clues to what happened at Bryce Manor, and why. Many times your eyes are on the bugs, so you’ll miss things unless you make a point to look, and even then it will likely take a couple of playthroughs to really grasp it. Each of Bryce Manor’s lonely rooms tell part of a sad story, and one nebulous enough that every player will likely come to a different, but equally melancholy, conclusion. For a spider just spidering around, Bryce Manor is a lovely bug-filled smorgasbord. But for a human looking on, every upended wine goblet, every half-empty suitcase, every faded and peeling family picture, every crumpled note is part of the puzzle. What’s the secret of Bryce Manor? I ain’t telling. And as I said, my interpretation is likely different than yours. But I will say this: coming to the end of Spider, with at least a general idea of what had happened in the house, I was left with a genuine sense of sadness. The house contained many relics of a story long over, but it also was a cradle for many lives – admittedly, insectoid ones, and naught but dinner from my perspective.

Spider ends very abruptly – so much so that I thought I’d broken the game – and unceremoniously dumps you back at the manor’s entrance for another go through. There is an easy replayability about Spider, its 28 levels can be solved in myriad ways, and many have hidden secrets that only intrepid spider explorers will ferret out. Three gameplay modes beyond the story will also keep you coming back, and for the measly price of $2.99, you’re crazy not to buy a game that’s made nearly everyone’s top-iPhone-apps list even if you don’t ever come back.

10 Responses to Review – Spider: The Secret of Bryce Manor