If you liked Braid, you’ll probably enjoy The Bridge. It is not by the same creative team, but in terms of mechanics, aesthetics, and structure, it may as well be called Braid 2: the Braidening, Braid Strikes Back. In the question of “homage or swipe,” it skirts dangerously close to the latter. If Jonathan Blow’s upcoming The Witness is a love letter penned to Myst, then The Bridge is sneaking into Braid‘s home and raiding its underwear drawer so it can dress up pretty and admire itself in the mirror.

I gently mock, but the core mechanic of The Bridge is different from Braid‘s: mostly. Instead of turning time around, The Bridge turns space around. Each puzzle level consists of a surreal illustration clearly inspired by the work of M.C. Escher. The player is tasked to tilt and turn the environments so that momentum carries a be-suited avatar toward an exit door. Other game elements will serve as obstacles to this process: rolling, crushing balls; locked doors with associated keys; and chiefly the fickle whims of gravity, which will sometimes toss the character off into oblivion. Death is only temporary, though, since holding down a button will allow the player to rewind time, just like in –

Ahem. Maybe this is better explained with screenshots. They’re really lovely, actually. The majority of The Bridge is in black and white, but that never really interferes with its readability. The hand-drawn illustrative style is delicate and well-executed. It’s all the work of a single artist and though it’s clearly an Escher impression it’s got the style down. 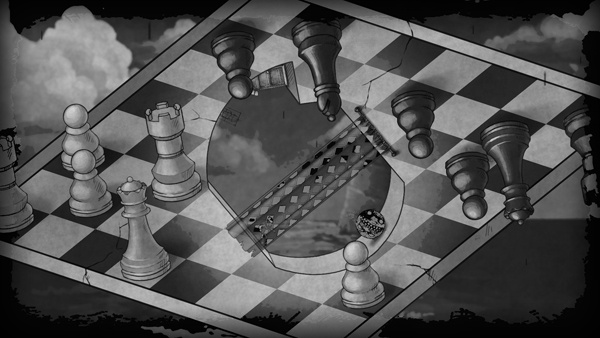 In terms of play as well as graphical quality I have to commend the level design in The Bridge. These are physics puzzles, but they’re generally good ones. Sometimes when a game relies a lot on physics, things get a little loosey-goosey for my taste, and I feel like I’m just fumbling around trying to luck on a solution. In The Bridge, most of the puzzles require forethought rather than being too fiddly. We who enjoy puzzle games love the “A-ha!” Moment, where a solution to a situation becomes clear. We like less those “Man, What?” moments, where the solution becomes clear, but it’s also clear that the road to execute that solution is going to be arduous.  The Bridge only has a few puzzles like that. I’m looking at you, Mirrored Spiral. 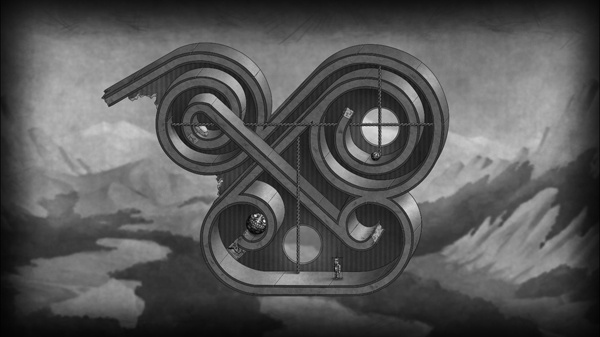 My biggest disappointment with The Bridge is that it’s really linear. In most comparable puzzle games, it’s acceptable to solve puzzles out of order. Maybe three or so puzzles will be available at any given time, and I can skip one or two if they prove too difficult. Sure, I’m going to hit a wall eventually, but this kind of design gives the brain time to rest. Grinding against one puzzle over and over again is not often an optimal way to come across a solution, and frustration is lowered by returning to old puzzles with fresh perspectives.

In The Bridge, every puzzle is self-contained, and most of the game consists of situations where I must solve the current puzzle in order to proceed. Future puzzles are illustrated as locked doors. I can’t see any strong reason for this design choice, since it would be perfectly acceptable to unlock two or three doors at a time and let the player choose. In fact, there’s a point early on where The Bridge does exactly this, allowing me to access both Chapters II and III simultaneously, and I thought: ah, it opens up now, that’s great. 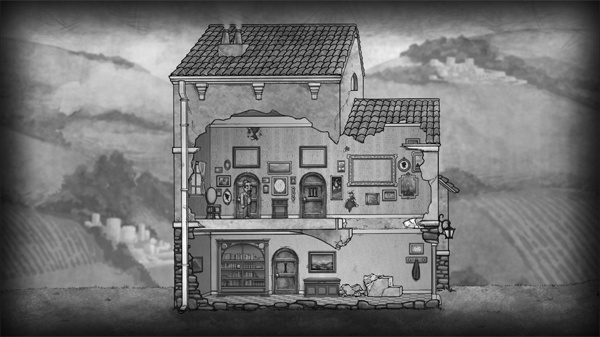 But then I was given access to Chapter IV, and only Chapter IV. When there’s only one puzzle at a time to explore, the only refuge for a frustrated mind is to put the game down and walk away for a while. The strictly-linear chapters of the game therefore took me a lot longer to complete, compared to split chapters where I could tackle puzzles by choice. This was something that, frankly, Braid did better.

Not really spoilers in this paragraph: At the end of each chapter of The Bridge, I walk by a little statue, where I get a vague static text drop about science and regret. I guess a book on a pedestal would’ve been a little too on-the-nose. At some point I solved all the puzzles and then it was over, though I could return to some of them now to get Achievements that I missed.

The Bridge could use another song or two. Puzzle rooms all play the same meandering-soothing track which gets old after a while, especially in the cases where I’m battering my head against a particular solution. Still, I’m shocked to realize I played nine hours of this game. It was mostly time spent pleasantly. 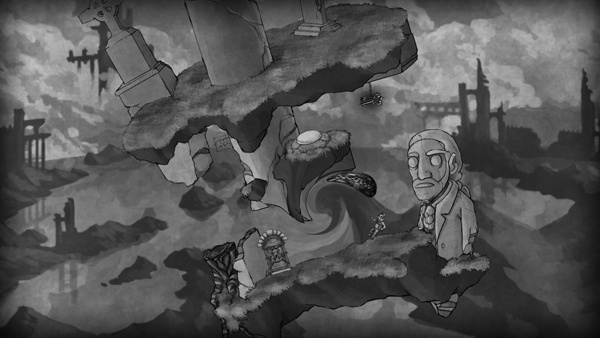 I confess I’ve had a review copy of The Bridge for a while, but it didn’t return to my working memory until I saw that it had gotten a price drop on Steam and a new Xbox Live release. If the game sounds like something you’d like, you can take advantage of both or either of those things. If the screenshots included here strike you, you’ll probably like The Bridge. You’ll probably also like it if you liked Braid. Did I mention that? It’s not quite as good as Braid, because of the little nits I mentioned and because the natural comparison is going to inevitably put it second in line, but it’s still worth a look.

3 Responses to The Bridge