Stupid. A waste of time. Evidence that Nintendo didn’t have a clue what it was doing. “Panic Mode”. Mental. Bonkers. Bloody ridiculous. Massively monstrous. Cheap looking. Ugly. Insane. An admission of failure. Useless. Baffling. What the fuck? Frankenstick!

These are just some of the words and phrases you might have heard mentioned last September in response to Nintendo’s unveiling of the Circle Pad Pro. Many of them by me, as it happens. So today I went out and bought one.

First impressions? The Circle Pad Pro – which I’m going to carry on calling Frankenstick from here on in because it’s shorter, more amusing and appropriate – cares not for first impressions. It’s big, it’s black and it’s damn ugly as hell. Not too dissimilar to some of the items you might have stumbled across in your Dad’s Forbidden Cupboard of Shame when you were a child. In terms of core design, the best way to describe the Frankenstick would be to liken in to the charging cradle bundled with your 3DS system, if your charging cradle necked a jug of steroids and started hitting the gym. It’s less sleek, generally more aggressive looking, around twice the depth of the charging cradle and has sprouted a humongous growth on the right hand side of the unit where your second analogue nub lives. If you’re a fan of Apple products, a student of sleek industrial design or care about aesthetic credibility in the slightest, the Frankenstick will make you want to put a brown paper bag over your head. Probably without any air holes and an elastic band tightly applied somewhere around the neck area for good measure.

It’s almost arrogant in it’s ugly looks, certainly making the 3DS a much less portable system both in terms of the added size of the unit and the automatic self pity incurred when seen with this thing in public.

In the comments section to my last piece on the Frankenstick, Gregg B remarked that “You don’t connect the Expansion Slide Pad to the 3DS, you connect the 3DS to the Expansion Slide Pad”. At the time I allowed myself a brief chuckle of this description, but the reality is that this is exactly how the Frankenstick works. There’s no real solid connectivity going on at all, no reassuring “clip” to attach the system to it’s new, deformed sibling. You just push the 3DS into the Frankenstick and the snugly fitted “spongy bits” (I’ve got all the scientific terms) do all the rest while an infrared connection allows the two devices to communicate. To it’s credit, the Frankenstick remains easily attachable and detachable without feeling flimsy or loose, as demonstrated by my fool proof test of holding the unit upside down without the 3DS falling to the floor and smashing into a million pieces. Great success.

Unfortunately this tight fit does come at the expense of some of the system’s core functionality. Both the game card slot and stylus pen are totally inaccessible with the Frankenstick attached, thanks to a large black bar at the rear of the unit which houses the infrared sensor and helps to keep your 3DS safe and secure. The absolute best thing you can say about this is that it’s a completely irritating annoyance and it’s conflicting design with the basic functions of the 3DS itself serve as a constant reminder of the Frankenstick’s patchwork job existence. It might only take a matter of seconds to remove the device and change the cart, but it’s an annoyance nonetheless. I honestly don’t know where else in consumer technology this sort of thing would be acceptable. It’s only on the cusp even in the bizzaro world of Nintendo accessories. 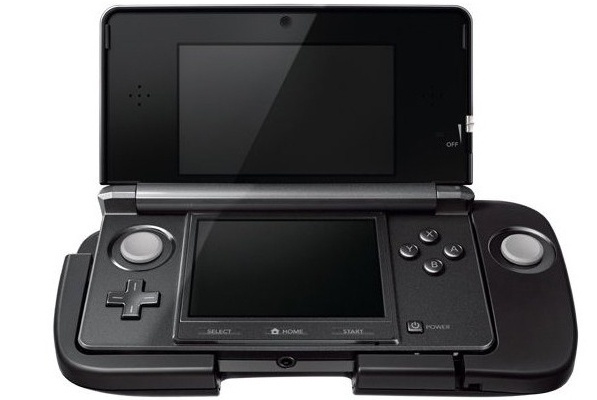 I told you it looked ugly.

So far so mid-life-crisis-Nintendo-accessory then, but thankfully the Frankenstick is a creation far more suited to purpose than to beauty. Much like a reliable builder or the City of Hull. Pick up your newly disfigured 3DS and you’re greeted by a much heavier but arguably more comfortable device. Screenshots alone barely do it justice, but the Frankenstick is one chunky hunk of plastic, and all that extra weight is going to be instantly noticeable the second you reach for your system to receive another batch of drawn penis’ on Swap Note. Personally I’ve never been a fan of flimsy control pads – the original SIXAXIS for PlayStation 3 felt like it could flutter away at the first sign of a draft – and the extra bulk represents my first (but not last) positive impression of the Frankenstick. It feels sturdy rather than heavy, adding an extra level of robust security to your 3DS and is surprisingly ergonomic in it’s design. The whole unit is comfortable to hold despite it’s awkward lines, extra weight and protruding lumps, which may come as a nice surprise for those who have complained of cramping when holding the system by itself for long periods.

Of course the Frankenstick’s true purpose is to compensate for Nintendo’s original lack of foresight in designing the 3DS hardware, and fans of the systems ever increasing library of third person action games will be pleased to know the Frankenstick does it’s intended job well. Along with a second analogue nub, the Frankenstick also adds two new trigger buttons, bringing the total number of shoulder buttons to four and aligning the system with most modern controller configurations. The quality of the additional new buttons is reasonably high, with the triggers in particular providing sufficient feedback in the form of a subtle click when pressed and feeling nice and responsive to touch. The second nub is exactly the same in touch, size and feel as the default 3DS nub and sits far more comfortably on the Frankenstick than images would suggest. You’ll still need half an hour or so to train your brain that it’s there, and will sometimes find your thumb caught between it and the face buttons while an Ooze chews your face in Resident Evil: Revelations, but once you get the hang of it the additional nub becomes a second nature part of your control set up.

In practical terms and ignoring the devices numerous negatives, the Frankenstick is an easy accessory to recommend. In Resident Evil: Revelations, the new controls felt like the difference between a compromised handheld spin off and a genuine, full fat Resident Evil experience. They are the difference between a fixed over the shoulder camera and complete camera control, and the difference between being able to move and shoot at the same time and not; at least without resorting to a Metal Gear Solid: Peace Walker style face button camera control configuration, anyway. I intend on writing up a more substantial Impressions piece on Revelations once I’ve played the game a little more, but my early thoughts on the game suggest that this is a welcome return to the series’ survival horror roots and that this is perhaps the game that Resident Evil 5 should have been. It’s really, really good, and for it’s faults the Frankenstick is allowing me to absorb that experience without the overhanging worry of controller shortcuts and hardware limitations. That’s something which I believe outweighs the cost of the accessory, both monetary and in terms of your street credit.

Side by side comparison's show the Frankenstick is no shrinking violet. When attached, it dwarfs the 3DS itself.

By the end of my 3DS play session today, I was actually bemoaning the fact that the Frankenstick is not yet more widely supported. Optional use of the extra button’s and nub is currently at the behest of individual developers rather than any OS level integration, and so only limited games make full use of the accessory’s features. Despite knowing Mario Kart 7 was not one of those games, I attempted a Rainbow Road time trial session to see if I could still use the default 3DS controls whilst taking advantage of the Frankenstick’s more ergonomic design and weighty feel. Thanks to the awkward position of the standard shoulder buttons with the Frankenstick attached, drifting and using power ups were too inaccessible to be regularly used, but the new trigger buttons and meatier, curvy feel seemed like a potentially brilliant way to play Mario Kart 7, and perhaps even provided a solution to those extended session hand cramps. In the space of a few hours, my attitude switched from cutting scepticism to being genuinely disappointed one of the handheld’s best games wasn’t playable with the device attached.

At the end of the day the Frankenstick is what it is, and that’s an inellegant solution to a problem that should never have existed. In eighteen months time when Nintendo will inevitably have replaced the launch 3DS with a 3DS XL or 3DS: Twin Knobs Edition or something, the Frankenstick will be consigned to history as a physical reminder of the terrible opening seven months the 3DS endured and of Nintendo’s ignorance in making basic design choices. Be it the reliance on a AAA battery for power or the design which restricts access to some of the system’s basic functions, you’re never more than five minutes away from being reminded of the incompetence that got us to this point in this first place.

Look beyond the silliness though and Nintendo’s eventual solution is one that isn’t as crazy or stupid as it looks. It’s unlikely a game will ever launch for the 3DS that absolutely requires the Frankenstick to run properly, so this is very much a disposable video game accessory in consumer choice territory. An optional extra for those that want it and little more. The question therefore becomes whether or not anyone should actually buy one, and that’s a surprisingly easier question to answer for a product as daft and obscenely ugly as this than you might expect. For anyone intending on playing Resident Evil: Revelations, Kid Icarus: Uprising (especially left handed folks!), Metal Gear Solid 3D, Luigi’s Mansion 2 or Monster Hunter Tri G, the Frankenstick is less the awkward and ugly step child than it is a potentially essential part of the 3DS family.