I am failing at the most fundamental tenet of this game. I am failing the title of the game.

Someone at Rock, Paper, Shotgun described Don’t Starve as “Minecraft meets Edward Gorey,” but I can’t find the article. That pretty much sums up Klei’s new buildy-scavenvival game, out today on Steam. Luxuriant, inky hand-drawn graphics and Saint-Saëns musical score meet industrial revolution science in a wilderness adventure that I SUCK AT.

Gentleman Scientist Wilson has been trapped by a demon in a strange wild land, with naught but his wits to survive. But wits have no nutritional value, and Wilson’s primary objective? Don’t starve.

That’s harder than it sounds. They added “eating” to Minecraft long after I’d lost interest in the game, so it’s sort of a new mechanic for me. We’re seeing a bit more of this survival stuff in games, what with Miasmata and hardcore mode in New Vegas and so forth. That Minecraft’s immeasurable success spawned a whole smorgasbord of scavenge/build/survive knockoffs is no surprise. Some of them are really good, like the promising and recently Kickstarted Planet Explorers from Pathea Games; others are basically straight theft, and still others, like Don’t Starve, clearly draw their inspiration from Minecraft phenomenon but have a style all their own, and as unique as Minecraft’s own charming blockaplaooza. 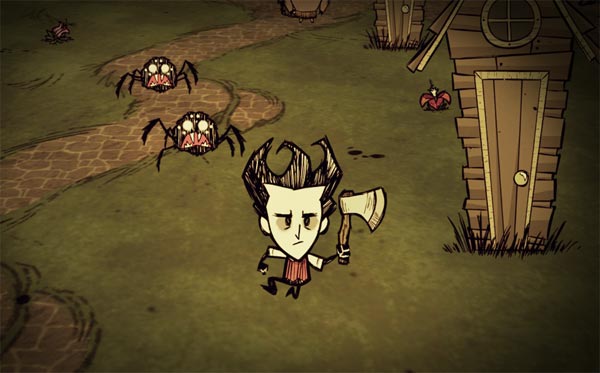 I am Wilson, Gentleman Scientist. I am currently fleeing from Gentleman Spiders in a most Gentlemanly way. Please ignore the Ungentlemanly screaming.

You know what I hate? Birds. Cursed birds. I will eat you, birds. I will eat you until you are gone. Birds everywhere, clucking, landing, squawking, flying off. I have no bird snares because I have no cobwebs. No cobwebs, no bird snares. Rabbit snares, those I have… but I have no carrots to bait them with. I would plant carrots, but I have no carrot seeds. Do carrots even come from seeds? And even if I did have carrots to bait my snares, it wouldn’t matter because rabbits seem rare. Everything you’ve heard about bunnies and their fornicatory prowess is a lie; it’s birds that breed like rabbits. They’re everywhere, and I cannot catch them and I want to. I need to. I WILL EAT YOU BIRDS.

No fool, as soon as the first night approached I gathered my meager possessions and put together a campfire. Night is short in this realm, but pitch black and deadly. You won’t survive it without fire. As a Minecraft vet I worried about having no walls, but most beasts of this wild fear fire and will leave exposed campers alone.

Especially campers who burn down the whole forest while experimenting with torches. 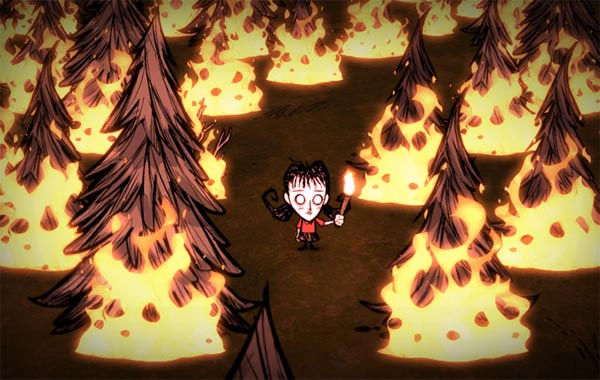 Goodness gracious. How Ungentlemanly. I am aghast. Forthwith, I shall endeavor to provide recompense for your be-cindered topiary.

Day Two dawned with bigger problems. Campfires are voraciously hungry for fuel and the accident with the torch left me sitting more or less in the middle of a choked Mordor-like tract of blackened stumps. Time to pull up stakes!

As I walk I dream of a utopia of berry bushes. My stomach is so empty its icon has shriveled to a little black raisin, and I’m reduced to eating flowers and seeds off the ground just to keep going. Eventually I reach the seashore and perish there, lost in a hardscrabble moonscape of rocks and dirt. I starved, which I’d been explicitly told not to do.

Next game went a little better. Don’t Starve has a simple interface and a delightful tooltip system, but it doesn’t really hold your hand – there’s no tutorial or instructions – preferring to let you figure stuff out for yourself. Learning from the first debacle I made Day One count this time, racing against the dying sun to gather the fundamentals. I’ll need at least 20 sheaves of grass, at least 20 sticks, some bits of flint to make an axe and pick, some logs for a fire, plus carrots and berries. No time to explore, just run.

When night came I was better prepared, and spent it squatted by the fire, weaving rabbit snares. Next morning I baited them with carrots and set them in a nearby field, and soon had five live rabbits in my pockets, which I quickly murdered (seriously, “Murder” is the option), skinned, and cooked over the dying fire. Time to chop more logs! 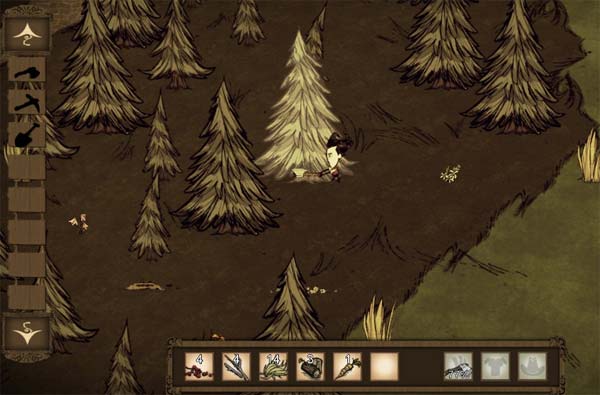 Back when I played D&D regularly we had this Nazi of a GM who was obsessed with skills like Wilderness Survival. Without ranks in Wilderness Survival you didn’t stand a chance in the wilderness, which makes sense in a way, but he interpreted it according to his own rather bizarre outlook – specifically, though we might be able to hunt food, we couldn’t butcher it worth a damn. Seriously, we’d bring down, like, a stag and he’d let us get a pound of meat from it.

“Two! Tons! It would be impossible to not get a bunch of meat from this thing!”

Eventually we all just made a point to take that skill, around the time he lost interest in it and began demanding proficiency in Rope Use.

Wilson clearly has no ranks in Wilderness Survival, because those five plump rabbits – five rabbits – weren’t enough to fill his stomach. I followed them up with berries and even some of my precious bait carrots and still I hungered for more. Things were looking grim, because I’d trapped the area clean of bunnies and picked it bare of carrots and berries. Onward!

I starved to death, in blatant violation of the game’s advice, two days later.

Attempt Three was the worst of all. Starting the game in a barren rocky wasteland apparently without end, I managed to make a pickaxe out of flint chips and a gnarled tree branch. Flailing at a nearby boulder, I prayed I’d find some worms or bugs for sustenance.

Gold? What am I going to do with gold? I can’t eat gold, you horrid, cruel game. And I’m so hungry.

Maybe I can eat gold. Hell, it’s listed on my bottle of Centrum.

…an average 70-kilogram individual’s body contains about 0.2 milligrams, or 10 nanoliters, of gold. If this amount of gold were refined and formed into a cube, each side would measure roughly 0.22 millimeters. The human body requires a minimal quantity of gold for certain metabolic activities, but the metal is toxic at any more than negligible levels. 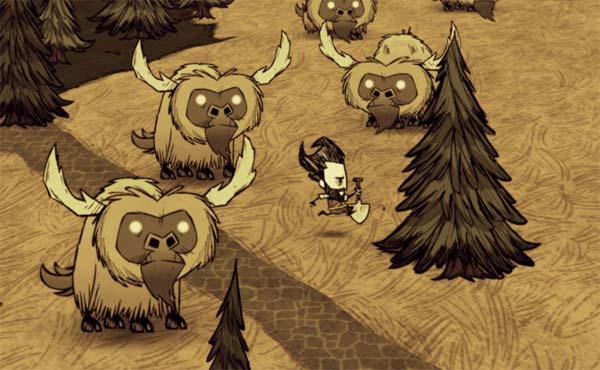 You cannot eat gold. Or, at least, you should not.

You’re supposed to eat things like those demon buffalo up there, but dude, you try to kill one when all you’ve got is a flint spear and your Gentlemanly manners.

Look, this may not come as a galloping surprise to some of you, but video games are kind of my thing. In fact it could be argued that without them I would have nothing. I would be nothing. My only other skill is a facility with Powerpoint that borders on the astonishing, but that’s not really a lot of fun and doesn’t give my life much meaning. Typically when I notice myself playing fewer games or enjoying the ones I do play less, this causes worry because I wonder what will happen to me if I lose interest in them altogether. I have nothing else. Yet when I play Don’t Starve, I must consider that maybe video games aren’t my thing after all, because there’s no possible way that anyone could suck so much at a game when games are his fucking thing.

It’s Meho’s fault, as so much ultimately is. He told me to buy this game. “It’s a very nice game, and I’m encouraging you to try it,” he said, that rat. That swine. Somehow my starvation is easier knowing it can all be traced back to Meho, that my death is on his conscience.

Once you get the hang of Don’t Starve, you begin to uncover its breadth and creative opportunities. Here’s a procedurally generated game world full of wildlife and danger. Your primary objective is don’t starve, something I still have a lot of difficulty with, but eventually – slowly, steadily – Wilson becomes a sort of mountain man: beard coming in, carrying tools in a skin pouch, knowing better than to get near trees while holding a torch. Still every bit a Gentleman Scientist, building the Science Machine is a crucial early step in Don’t Starve, as it allows you to prototype more advanced items, even farms and paddocks to hold livestock. It’s clear that I need to come up with some sustainable method of food production, because berries and rabbits won’t cut it. At the same time, it’s also clear that Don’t Starve is more about exploration than entrenchment. In Minecraft, I at least would scout around for a suitable home, build a redoubt of mud, and get to work putting together a fortress that would serve as my base of operations until the game crashed. Don’t Starve seems to want to keep you on the move. 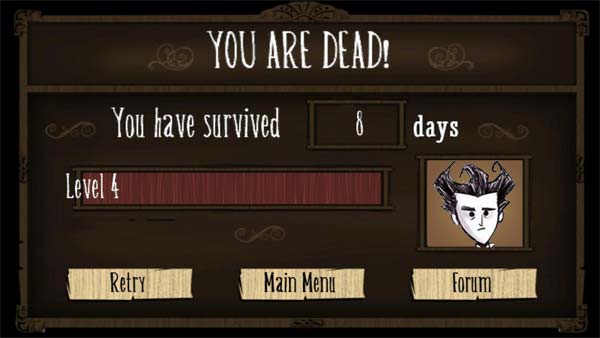 Fiddlesticks. Fie. I do declare. Most untoward. Harrumph.

After a few hours I’ve only uncovered just a bit of what this game has to offer, and if you’re the type who likes to scavenge and build, who enjoys experimenting with game systems rather than being told how they work, it might be worth your investment. I have encountered one very annoying visual problem – the game blinks every five seconds or so, a super quick flash to black that makes my head hurt after a while. Other than that I notice it’s not a direct executable through Steam, which means FRAPS refuses to take screenshots even when I’ve ordered it to monitor the Aero desktop. Don’t Starve began life as a Chrome browser app (a demo of the game can still be found in this form), which may explain why it works the way it does through Steam.

I lost interest in Minecraft a lot earlier than some people, and I’ll probably lose interest in Don’t Starve as well. But I advise against seeing that as any kind of indictment of the game. Meho’s suggestion is a good one, even though he’s now responsible for my death seven times over. Klei’s got a good pedigree, with Mark of the Ninja and others under its belt already. Depending on the kind of gamer you are, the boisterously macabre silliness, vast repertoire of craftable tools, and endless randomization of the world may keep you hooked for a long time. Klei is promising regular updates, too, so you may starve, but you’re unlikely to stagnate.

As for me, I’m juggling episodes of Don’t Starve with (more literal) episodes of Telltale’s The Walking Dead, meaning I’m either getting dead by not eating, or getting eaten by the dead. It’s just the sort of ghastly irony that Wilson would appreciate.

Warn Steerpike not to eat Spider Meat at steerpike@tap-repeatedly.com.