By eleven in the morning I’m a sweaty, dizzy, panting mass of insect stings. Earlier, sliding down a rocky embankment, I lost my footing on the rolling stones and toppled, face-planting in the mud. I dropped my knife and saw it spin out into the bushes but I can’t find it. My stratospheric fever makes this bright day dim. The periphery is clouded by a dense black fog; my head pounds. I stumble again and fall, injuring myself. My throat is parched and I cannot find water. I am lost among unrecognizable landmarks. And I am dying. If I’m very lucky, I will die before it finds me.

Welcome to the first day of the worst days of my life.

The first of the Steam Greenlight projects are available, and among the most intriguing is Miasmata, a first person adventure from IonFX – whose lofty-sounding name contains two employees: brothers Joe and Bob Johnson.

The first thing you need to know about Miasmata is that it was developed from the ground up by the Johnsons. No Unity here; the engine is custom. 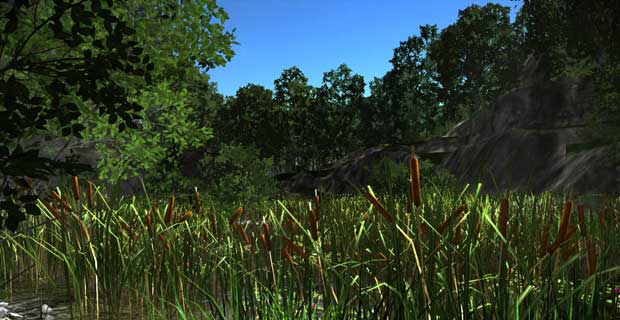 One dude programmed this engine. One dude.

The second thing you need to know about Miasmata is that while it’s clearly an indie game (spelling errors, quirky bugs, the normal signs of insufficient polish due to lack of resources), it’s also a pretty damned good one. Miasmata is a survival horror experience with emphasis on the survival part. Robert Hughes is marooned on a tropical island, and stricken by some unknown but deadly plague. Scientists on the island have been working on a cure, and Hughes, a scientist himself, has washed up on shore “a traitor and betrayed” – though I’m still waiting to find out what that might mean – and he’s looking for medicine to make him better.

I haven’t met any scientists, though; I’ve met corpses with knives and hatchets buried in them. The various tents and crude plank structures are populated by strange notes and fragmentary maps, the odd bit of research equipment, and little else. 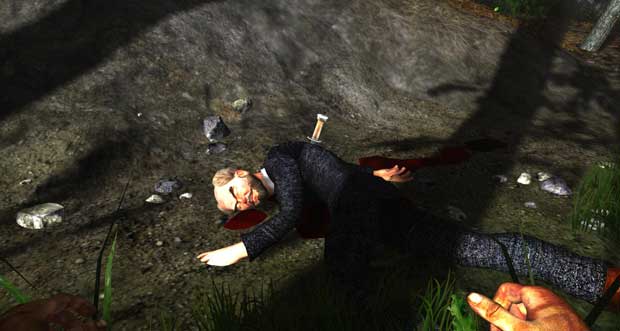 I had nothing to do with it. I found him this way. Seriously!

There’s a creature on this island – a bizarre hybrid that seems mostly cat. It’s hunting me. So far it hasn’t proved too aggressive, which is a relief since I wouldn’t have a chance against the thing. I’m sick and weak, I have few tools, I’m lost, I’m thirsty. So far when we cross paths, the monster has roared at me and gone away, but I’m sure it’s going to take a swipe at me when it feels hungry, so I hide whenever it appears.

Miasmata is a lonely, scary experience, one so unique you’d never see it from a major publisher today. I can’t say whether the Johnson brothers drew inspiration from 1994’s Robinson’s Requiem, a profoundly flawed sci-fi survival adventure that nonetheless introduced a handful of intriguing concepts. In both games, the harsh environment is your primary challenge, but Miasmata does it much, much better than Robinson’s Requiem did, and looks as beautiful as any top shelf game from the past few years (while Robinson’s Requiem didn’t even look good for 1994). That this game was engineered from scratch by Joe Johnson, and runs fine, is staggering to me. 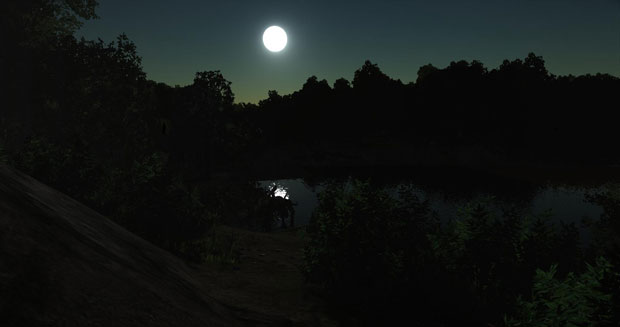 Indie adventures like Penumbra and Amnesia are also evident inspirations for this intriguing title, at least insofar as all manage controls innovatively. While the controls are very standard WASD first person, Miasmata captures movement brilliantly. Hughes clambers slowly up hills and flailingly tumbles back down them, losing his footing often, building up speed as he runs and coming to skidding stops that require you to backpedal frantically unless you’re looking to go over a cliff. Your body, essentially, has weight and mass; just like in the real world. You can’t go from a blind sprint to a dead stop. Since Hughes is very sick, he has less control over his body than you or I might, and he’s pushing himself to the very limit just to get around the island of Eden.

The mass-based movement doesn’t work perfectly, but it works amazingly well. It’s one of the few visual clues you’re given in Miasmata, a game with no HUD, where you depend entirely on notes in your handwritten journal, the map you build yourself by triangulating on landmarks with your compass, and your wristwatch. It makes you appreciate how much visual information most games give us, at the expense of realism. In Miasmata, you’re lost on an island you’ve never visited; navigation is hard and the game doesn’t just give you the information you need. Similarly, knowing you’re sick doesn’t mean you know how sick you are, and knowing your basic objectives doesn’t mean you know how to complete them. 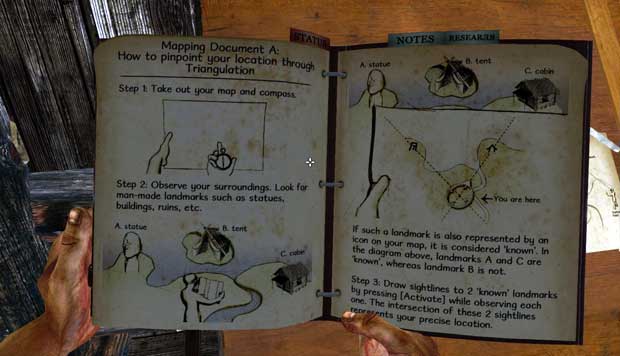 Hughes must collect samples of local plants and analyze them to determine if they can be made into medicines. This takes up a fair amount of your time – looking for new flora, taking it back to a lab, peering at it through the microscope, and combining it with other candidates to make chemicals that cut fever, prop up your disease-ravaged body and mind, and, eventually, will cure his plague. The attention to detail on this aspect of the game is significant, which makes sense given that it’s really your primary task. While solving the mystery of the dead scientists and the monster hunting you is tangentially important, Hughes is really sick, and getting better is all that truly matters.

This brings up an important flaw in Miasmata, though whether it’s a bug or an intentional design decision (or I’m missing something), I don’t know. Each plant you find gets noted in your journal, along with a hand-drawn illustration so you can recognize it again. Once you’ve researched a flower or mushroom, Hughes notes in its entry what it can be formulated into. So far, so good.

Unfortunately I’ve noticed that Hughes’s journal has a spotty memory. Plants I know I’ve researched several times disappear from his notes with annoying regularity, and while it’s easy enough to jot down what a flower can be synthesized into, without a picture it can be tough to remember what each looks like. Of course there are no tooltips or anything of the kind in a HUD-less game, so every time I wander up to a bed of Red and Yellow Hibiscus or Purple Spiked Prairie Flowers I have to depend on my own memory, which is even less useful than the journal. You’re reduced, then, to locating samples comparatively near any lab, taking them back, researching them for the umpteenth time, and then formulating them into medicine to keep you going. 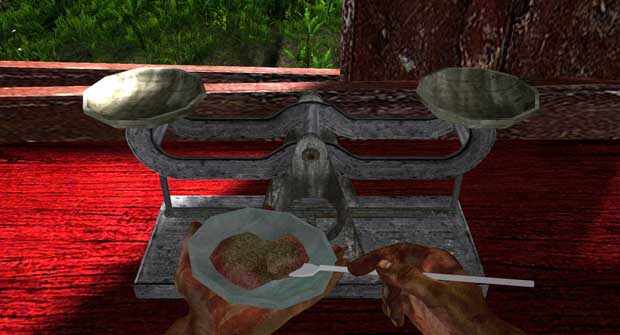 I call it “flower soup.”

Another issue obliquely associated with this one is the map. You don’t have one. What you have is a large sheet of manila paper that you slowly ink in with the island’s geography, using known landmarks to literally triangulate your current location and painstakingly add details. If you’re not in an area you know implicitly, your position doesn’t show up on the map. And simply visiting a landmark doesn’t mean you “know” it – that requires that it fall inside the arc of a previous triangulation. It’s much harder than it sounds.

While on one hand this means that concepts like finding high ground (so you can see as many landmarks as possible) are of crucial importance in the game, doing so is often an exercise in frustration because no matter how hard you look, you won’t be able to find two “known” landmarks to conduct a triangulation.

I am no cartographer, though I certainly realize that just because you have a map doesn’t mean you know where you are on it. It is much more realistic to require that Hughes depend on landmarks he recognizes to place himself, and to expand his knowledge of the island’s layout. But this is one of those situations in game design where unequivocal realism runs up against player vexation. Miasmata’s efforts at HUD-less realism occasionally cross the line into fun damagement. A self-fill-outing map would be contrary to the very realist survival structure of Miasmata, but I find it hard to believe that someone couldn’t look across the bay at a big stone statue or something and use it as a triangulation point simply by estimating its relative distance from his position. 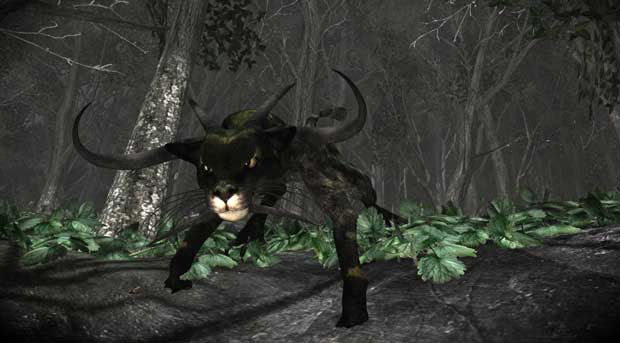 Since I guess I discovered this creature, I get to name it. I christen thee… “Catigator.” No! “Tigerdile.” No! “Pumado Dragon.” No! Ahh, screw it, I should call it by its true name… it’s a “JESUS FUCKING CHRIST IN HEAVEN WHAT THE FUCK IS THAT THING GET AWAY GET AWAY FROM ME DON’T EAT ME PLEASE”

Beyond these (pretty major) issues, though, I find the lack of visual information in Miasmata to be rather thrilling. You don’t know where you are; you don’t know how to find the cure; you certainly don’t know when the creature might turn up, or whether it’s going to get aggressive. The result is a mystery that is occasionally exasperating, but unquestionably compelling enough to keep most gamers coming back.

Miasmata, as I mentioned above, would never have been approved by a conventional publisher, nor would it have been attempted by a conventional developer. Here’s a game where you’re apparently alone on a large island, being hunted by a solitary creature, frightened, sick, and miserable. Far Cry 2’s awful Malaria mechanic is as close as any mainstream game would come to integrating such things, and Far Cry 2 is a far cry indeed from the clever, unique, and innovative efforts IonFX put forth in Miasmata.

With all that in mind, do I recommend Miasmata, which debuted November 28 on Steam and is currently retailing for about $14?

Absolutely, provided you go into it with your eyes open. If you like your first person games to be balls-out shooters, Miasmata isn’t for you. If meticulous exploration, flora-gathering, and looking for fresh water doesn’t appeal, Miasmata isn’t for you. It’s a slow, thoughtful game, one that reveals very little in terms of direction, and brings the realities of survival to the fore in a way rarely seen in the medium. Ultimately, Miasmata will resonate with a certain kind of player. I hope that there’s a large enough number of such players out there that IonFX reaps some rewards for risking such an off the beaten path design, because Miasmata is stunningly beautiful and an absolute feast of challenge. It’s just not for everybody.

I spent most of the morning scrabbling around on hands and knees looking for sticks. A good stick is dead useful when you’re alone and ill and stalked by a savage what-is-it. Next time the monster turns up, I plan to light my stick on fire and wave my makeshift torch in its face to make it go away. If that doesn’t work I might throw this rock I found at it. If neither works I’ll probably get eaten.

But it’s about time I started showing this island who’s boss.

Steerpike needs rest and lots of fluids. Send some to steerpike@tap-repeatedly.com.

Kieron Gillen is a Stud