Part 3: The Third of the Great “Imaginators”

In this, the final installment of “Literature, Gaming, and Tomorrow,” (first two articles here and here), I will examine the final of my three proposed “Great Imaginators” – that is, authors, dreamers, and creators of literature who in their so-called “fiction” actually proposed a world that has come to pass nearly in lockstep with their vision. Our third imaginator is almost a contemporary of ours, and his vision hasn’t quite made it to reality yet. Similarly, the vision of gaming as literature, and how it will define the future, is still coming about.

A few of Tap-Repeatedly’s more adroit readers have pointed out that “Two Toes” was shortsighted in overlooking some of history’s best “imaginators.”  There are probably a dozen other cool “imaginators” but the three chosen made their marks so vividly, and so in advance of today’s technology, that most experts agree: they stand out well above the crowd because of the impact they had on our society predicting real things that actually came to pass.  So if your favorite has been left out, understand that my goal here is to present a thesis that imagination alone isn’t enough without prognostication.

The third imaginator was Isaac Asimov.  An engineer by trade, he was a natural to develop the concept of the robot for use in society.  Asimov is the most influential author on the subject and virtually every student of science fiction or gaming knows of his Three Laws of Robotics:

Unlike Wells and Verne, however, his predictions relating to robots may not come to pass for years or even decades, but come true they will – with at least one small proviso: the first law of robotics has already been broken, as we will discuss shortly.

Asimov’s work is considered well ahead of its time because robots, as he envisioned them, do not now exist and may not for many years to come. This may be for one or more of three reasons:  (1) many roboticists, perhaps influenced by movies such as I Robot, saw the enormity of the task and backed off;  or (2), perhaps concerned their work largely sponsored by grants from DARPA (Defense Advanced Research Projects Agency), would be used for military purposes instead of social enlightenment;  or (3), because our AI knowledge is not nearly at the levels it needs to be to emulate Asimov’s vision.

Even the grandest efforts to create a lifelike robot have failed to meet Asimov’s demands.  For example, Honda created a robot they named ASIMO.  While ASIMO is clearly a robot, by definition of the experts, it doesn’t approach the capabilities of Asimov’s writing.  In Asimov’s world, a robot was capable of virtua 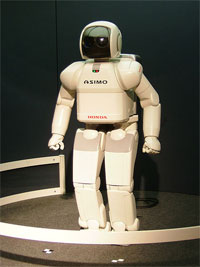 lly all actions a human could undertake.  This included the ability to learn, since rational thought and a clear set of principles was required in order to accommodate the Three Laws.  Though ASIMO’s abilities are impressive, they are quite limited.  The following list of its skills, as noted in Wikipedia, illustrate that its features fall into five basic categories:

What the heck is a robot anyway?

The fact is the above illustrates two things… how far we have come in the science of artificial intelligence, and how far we have to go.  What we must remember is that Asimov is more contemporary than Verne or Wells.  Their ideas had years to percolate.  I Robot, a collection of nine short stories by Asimov, was published in 1950.  So, although in a mere 60 years our progress has been remarkable, we do not even approach Asimov’s reality.  That doesn’t mean robots are not in general use.  After all, haven’t you ever heard of the Roomba?

By dictionary definition, a robot is:

A mechanical device that sometimes resembles a human and is capable of performing a variety of often complex human tasks on command or by being programmed in advance.

That is rather a cute definition, but not very informative.  “Two Toes” much prefers P.W. Singer’s thoughts on the subject to the dictionary, given that the latter says virtually nothing.  According to Singer, in Wired for War, a robot consists of three critical elements that must act together.

If it lacks any of these three parts it is not a robot.  So, Honda’s ASIMO is not a robot because it looks like or resembles a human, but because it senses the environment, because its processors tell it how to react, and because its effectors are capable of reacting as commanded.  But heck, a Roomba satisfies that definition as well and neither approaches the robots envisioned by Asimov, but we are getting there.

The fact is, whether for good or ill, we are making vastly more intelligent robots. But are we moving toward Asimov’s vision?  If yes, are we approaching it in a way that is good for society? In an article in September 09’s issue of Popular Science, we are treated to the latest advance in robotics, a true killing machine in which the pilots are seated at computers 7,500 miles away from their targets.  Expert gamers are sought by the Air Force for training as “tomorrow’s” pilots… though these robots are being used today in Iraq and Afghanistan.  But that is precisely why some of the leading roboticists are refusing to work with a grant from DARPA. They see positive uses for robots in medicine, industry, and even general use for public consumption.  It will take a monstrous leap in AI to make it happen, but then, who really thought refined uranium could be used to blow up a city making residence on the planet tenuous?

Maybe we don’t need robots at all for a wonderful and peaceful future…maybe all we need from our imagineers is the replicator from Star Trek… and the robots to collect the raw materials to stuff into the replicator… that should solve it… get busy you guys, before we blow ourselves up for real.

Monsters We Have Met