The beginning is probably a good place to start.

Earlier in the year, I managed to find some time to play through Superbrothers: Sword and Sworcery EP (in May), Journey (in June) and Dear Esther (in July). I’d heard nothing but exceptionally good things about them so, naturally, I was incredibly excited to finally be able to play them. S:S&S EP had until then been a tablet exclusive (and I didn’t have a tablet), Journey was something I’d sampled only briefly at the EG Expo 2011 and I had been aware of the original Dear Esther mod for Half-Life 2 for years but hadn’t gotten round to playing it, in which time, the astonishingly beautiful remake was on the horizon.

Anyway, recently in the staff forums where we talk about our readers in secret, I mentioned in the Journey thread that I found it ‘underwhelming’, and lumped it with S:S&S EP and Dear Esther. Understandably a few brows were furrowed. I’d only ever discussed why I didn’t get on with these games in a few comments and emails here and there, so rather than continue that trend I thought it was high time I spilled the proverbial beans.

I completed Journey in a single sitting, Dear Esther in two and S:S&S EP in three or four on PC. I had no distractions — it was just me, each respective game, clear skies and an open mind, which proceeded to slowly close down as I got further into each one. I came away from each feeling somewhat disappointed and underwhelmed — underwhelmed in the sense that they didn’t stir me in the way they clearly had others — and in the case of S:S&S EP, frustrated even.

Let me get a few things straight first though: these are all unequivocally beautiful games, not just visually, but aurally as well. I’d have trouble coming up with many games, if any, that surpass or even match them in these areas. They’re sensory delights; awe-inspiring, evocative, intriguing, unique and, in many ways, they transcend what it usually means to be a game. So what the fuck’s going on? Why did I find them disappointing?

Unfortunately there’s no single unifying reason, so I’ll have to explain myself game by game. Let’s start with S:S&S EP before Harbour Master writes about it and I look like I’m copying him. Spoilers, etc.

With Superbrothers: Sword & Sworcery EP the cracks started to appear during the Sylvan spirit sheep puzzle which seemed to rely purely on guesswork. I spent way too long randomly clicking and not-so-randomly clicking sheep in vain before eventually breaking and consulting the internet (which I really don’t like doing). When I found the solution it made no sense anyway. Then came the Trigon battles, which initially relied on guesswork as well. Fail to block or dodge one of the big attacks and you have to start the whole shebang again, and seeing as each one is timing based there’s no way of hurrying things up. What’s more, having to click attack and block icons seemed a tad clumsy given the reliance on visual cues. Several times my mouse pointer accidentally drifted off the necessary icon or I narrowly missed when clicking, causing me to fail and start again. It’s a shame the game didn’t tell me earlier that Z and X could be used instead, which I discovered perchance during one of the final battles.

Another Sylvan spirit puzzle involved strumming waterfalls like guitar strings, which was really nice, but, like the sheep puzzle, I couldn’t for the life of me work out a pattern. One minute it was the first waterfall first, the next it was the third first, then the second. There was no pattern and I was getting angry again, so I consulted the internet. Apparently it was a bug because when I restarted the game the puzzle was a cinch. Thanks bug.

Perhaps the most egregious issue I encountered was one involving the lunar cycles. Unbeknown to me at the time, I’d started the game during the dark moon cycle so my first forray into that dream saw me chase down the Grizzled Boor only for him to seemingly disappear. After defeating another Trigon I obtained a piece of the Trifecta and left the dream. I’d been told that it was possible to switch to the bright moon cycle somehow so I searched, and I searched, and I searched. With the slow walking speed and awkward navigation this took a lot longer than expected but I eventually found the moon grotto (which allows you to change the lunar cycle). Unfortuantely I had no key, and as far as I could tell there was no key to be found. I was stuck, and in the end I gave up and sought clues from a friend, namely Harbour Master who I trusted to be cryptic enough as to not give the game away, so to speak. We tossed emails back and forth and I came to realise that the Grizzled Boor — who was still nowhere to be seen — carried the key to the moon grotto. I thought it was another bug because he apparently appears in the bright moon dream so I did some Googling and found this thread. Here’s the clincher:

This is how the game is intended to be. There are parts of the game that, when played out of moon phase or out of order, result in other parts being missable.

If you split the tree & fight the dark moon trigon first, you can’t fight the boor.

So if you start the game in the dark moon cycle (as I did) then there’s no way of changing to the bright moon cycle without either waiting (a couple of weeks in my case) for it to change naturally (not something I wanted to do) or altering your system clock (not something I wanted to do either). Great. I didn’t want to cheat and I figured if it was by design that the developers wanted me to wait, then I would bloody well wait, Cheating Cheater trophy be damned. As such, by the time the lunar cycle had changed I’d drifted from the game. 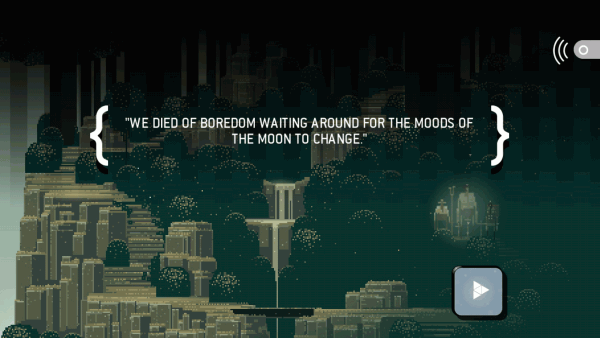 Entering the bright moon dream at long last reminded me just how downright gorgeous S:S&S EP is. I was happy to just sit there, cooing gently, taking in the delightful sights and sounds, but this thing needed resolving; I’d already spent 2-3 hours wandering around searching for something that didn’t exist (yet) and a couple of weeks waiting for the chance to carry on. A couple more Trigon battles and a tedious dash up Mingi Taw later and the game was finished. It took me 7.2 hours according to Steam which from all accounts is quite a long time.

S:S&S EP was by no means a bad game, so don’t see this as me tarring it with the poo brush; it didn’t bother me that it was a light point and click/touch adventure game, or that it was short, in the end it just rubbed me the wrong way too many times for its spaced out quirkiness and beguiling marriage of perfectly placed pixels, sumptuous gradients, and Jim Guthrie’s hypnotic sounds to cast its spell over me. I get why xtal said ‘I don’t throw around the word “transcendent” lightly, but here is an utterly transcendent experience’ in his Games of 2011 list because between my moments of frustration I got that sense; that feeling that here was something special; here was something far greater than the sum of its parts, spiritually. It’s just a shame those feelings were punctuated and spoiled by more irritating moments.

Yesterday I bought a Nexus 7 so I’m wanting to give this another spin at some point using the game’s native touchscreen control scheme, and hopefully during the bright moon cycle. It won’t be like playing it for the first time, but perhaps foreknowledge of its foibles will cast it in a better light.

Anyway, here’s The Ballad of the Space Babies, probably my favourite track from the game.

To contact the author of this twaddle email greggb@tap-repeatedly.com