Jenova Chen first gained name recognition for Fl0w, which started as a Flash title on PC and matured into a PS3 downloadable. Like the first part of Spore if Spore had been good, Fl0w was basically a tranquil, zen trip into life, love, and death in a puddle. Steering your little protozoa around, you ate smaller creatures and evolved a longer tail, descending into ever darker levels of the pool in a quest for microbian dominance. It was soothing to play. This and its simplicity were what made it work.

Chen was studying Interactive Media Design and USC when he met fellow student Kellee Santiago, and the two would go on to found ThatGameCompany, receiving a three-game contract from Sony, which has aggressively hyped the small developer and its art-house style. Their first job was to rerelease Fl0w on PSN. Shortly thereafter came another marketplace title, the breezy, beautiful Flower. The last tick on the studio’s contract is Journey, by far the most ambitious game the team has made, and its greatest triumph so far.

Journey is unlikely to divide people, because I think those who’d find it disappointing will know to avoid it. Chen, Santiago, and ThatGameCompany collectively make a certain sort of game, and they don’t seem to deviate from the model. Their games are peaceful and meditative. Clouds and breezes replace shooting and smashing. What Journey represents is the ultimate realization of the style of game that’s become the studio’s trademark: dreamy, metaphysical, hypnotic, tranquil, and brief. For all that it’s short, and its tail is shorter; for all that it is what it is and what it is may not resonate with you the way it did with me, Journey is revelatory. As a responsible journalist I feel I ought to shy back from saying what I want to say, and what I want to say is this: if you have a PS3, buy Journey. If you don’t have a PS3, go get a PS3, then buy Journey.

It’s a travelogue adventure in which your not-quite-human, poncho-clad avatar trudges through the desert toward a distant mountain. It is not about pure exploration in the sense that Dear Esther was, though it shares shares more with Dear Esther than with any other game except its own predecessors. In a way it is more objective-driven, and to some absolutely minimal degree you do see more traditional game mechanics in Journey – very simple puzzles, the need to avoid certain mild threats, that sort of thing. But don’t think of it as a game, think of it as an experience. 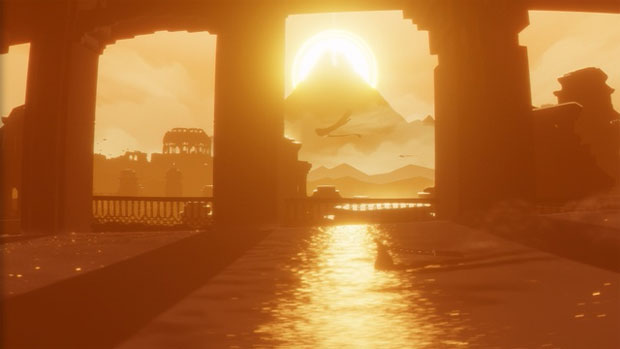 The beauty of the desert, the sparkling, glittery sand, sometimes gold, sometimes pink, sometimes sun-drenchedly white, ever shifting. The gentle susurrus of the wind, murmuring its way across the dunes. The almost blinding pre-gloam sun in the distance. That cleft mountain so far off, that is so obviously your destination. The old yellowed ruins and the unique life forms you’ll encounter here.

This is a gentle desert, not a fire-blasted hell. And it’s presented as its own collective entity: the sand, the wind, the sunlight; these things make up the desert, make it a singular body despite their own disparate natures. I visited White Sands once years ago, an unearthly place that reminds me a bit of Journey’s setting, but its very presence in reality means White Sands can’t actually compare. I must admit there is something also to be said for the fact that Journey is a safe game. In White Sands, alone, I’d been warned repeatedly not to stray too far from my vehicle. I’d been warned never to use my footprints as landmarks. I’d been warned that the dunes move, that the landscape can change in seconds, and I’d been warned that if I got lost I might not be found. It was a good warning. Even with it in mind, once when I did lose sight of the road it took me an increasingly concerned half an hour to find it again even though it was less than fifty feet away. In Journey, though you’ll quickly lose your immediate sense of direction, you can wander without that fear at the back of your mind.

Journey is also a story of pilgrimage, of meeting God. I don’t want to say too much about that part. You’ll see it yourself if you play. Anyone who starts Journey will finish it unless they willfully put it down, though to be honest I can’t imagine who would, or why.

As you traverse the desert, you’ll encounter delightful schools of aerial creatures that resemble tiny fragments of flying carpet. Cavort with them and they’ll swirl around you, lifting you into the air in a sort of whirlpool of patterned fabric.

You yourself can only interact with the environment using your voice, a tweetling chirp that draws the attention of the little beasts and can activate certain objects in the landscape. Beyond that you can walk, and jump floatily in a way that is almost, but not quite, like flying. As you explore you’ll find the occasional item that extends the length of your character’s scarf, which billows ever-longer behind you in the wind. The scarf in turn is what powers your jumps. The longer it is, the longer you can soar gossamerly through the blowing sand, a suddenly aerial being only slightly weightier than the blowing petals of Flower. When your jump power is exhausted, you need only chirple at some of those carpet creatures and they’ll zip over to refuel you. Journey is not about challenge.

Now, this game is about as far removed from Dark Souls as anything in the universe. Comparing the chromatic, lilting murmur of  Journey’s desert to the desolate, hard-edged spite of Lordran is almost blasphemous. Yet you can’t escape the comparison when you think about the multiplayer.

In Journey, every now and then as you trudge up the dunes, or scoot down them in a joyous sand-scattering surf that never gets old, you’ll see a flash of red off to one side, or hear a hoot that sounds suspiciously like your own character’s voice. And then maybe running toward you is another armless, poncho-clad entity, trilling and warbling away, their own scarf flapping as they scamper in circles around you in greeting. This is another player, randomly dropped into your game (or were you dropped into theirs? It’s all the same desert, and it’s seamless). So for a while you’ll journey along together.

Even when you’re alone, Journey doesn’t feel like a lonely game – but the unvarnished joy of sharing the trip, temporarily, with another traveler is brilliant. No names, no PSN IDs, no words, no headsets, nothing but chirping bounds and shared exploration. Eventually you’ll maybe pause the game to go answer the phone, and your character will sit down in the sand. The other player might mill nervously around you for a while, chirruping for your attention, but if you don’t return inevitably they’ll wander off with no hard feelings, back to their solitary progress. Or maybe you’ll lose sight of your companion when the wind blows the sand a certain way, and then just like that they’re gone. No worries, the journey is safe. They’ll find their way.

This multiplayer is both one of the greatest aspects of Journey and its one potential issue. Journey is a very short game, and even though you’re likely to play it a few times just because it’s so peaceful and so beautiful, eventually people are going to stop playing it, and when that happens the multiplay part is going to fall off. So if you want to be absolutely sure that you’re getting the full Journey experience, you’d better grab it right now before people begin drifting away. Will the game be significantly reduced if you go through the whole thing without ever seeing another player? I don’t think so… but I would miss it very much all the same.

In the end, though, I can say with assurance that this is one of the most beautiful games I’ve ever played, and in some ways, despite its brevity, one of the most rich. The last 25 minutes of the journey are like nothing else, and worth experiencing. The story hidden in the old ruins is worth deciphering. The one scary moment is worth enduring. Normally here I might say something like “your mileage may vary,” but it’s really the same number of miles for all of us to the top of that mountain. Journey is one we all should take.