Deeper and deeper I ventured, a brave warrior in search of… jeez, I don’t even remember at this point. At first I thought no place could be worse than the Depths, that it was the darkest point in the universe. I had defeated Gaping Dragon, its nightmare boss, and was rewarded with a key to Blighttown. That name does not sound promising, but as a brave warrior in search of <REDACTED>, it was on my list of places to visit. After all, if you’ve been keeping up with these Diaries then you know… it couldn’t be worse than the Depths, right?

Today’s topic: things about Blighttown that are worse than the Depths.

Everything about Blighttown is worse than the Depths. This place invented the word “disgusting.” It’s the very last segment of a Human Centipede of disgustingness. My language may be insufficient to describe how horrid and revolting this vile place is. I don’t know if I have the words, but I’ll try.

Imagine the city of Calcutta fucked a septic tank. Blighttown would be the profane, plague-riven overspill of that unspeakable coupling.

Hey look! I did have the words.

As loathsome as The Valley of Defilement from the original Demon’s Souls was, Blighttown is worse. A leprotic, squalid collection of feces-encrusted plank huts perch on warping stilts over a fetid retaining lake where all sewers go to die. It stretches as far as the eye can see, bilious ground fog creeping here and there to the endless, ceaseless dripping and splotchy march of decay. I’m so far underground at this point that by the time I resurface the sun and human company will both be lost on me. This obscene setting is Blighttown, home to gnarled, shambling… geez, I don’t even know what they are. They live in Blighttown, man, do I need to paint you a picture?

Before I set off for Blighttown, I was in Darkroot Garden, a place that’s considerably more immense than I thought it was. I invested 20,000 souls in the Crest of Artorias, which opened up a door deep in the Garden. Not the door I originally thought it opened, but a door all the same… and through that door is a huge new area. While 20,000 souls is a ridiculous sum to pay for a key, it quickly proved worth it, because through that door is a veritable clown car of free souls.

Artorias the Abysswalker vanished in Darkroot Garden hundreds of years ago, and though many great heroes set off to rescue him, none ever returned. They remain there as spirits, doomed to attack the living, but also doomed to be so stupid that they fall off a cliff at the slightest provocation and are worth around 3,000 souls apiece. While I admit I felt a little guilty churning through enemy after enemy in this way, in Dark Souls you take what you can get. Lure foes -> Cliff -> Campfire -> Repeat.

Hello, we were once heroes like you. And we died. And we’re stuck here. Word of advice: don’t be a hero.

We need to pause here to reflect on a tragic aspect about both Souls games. While there are plenty of monsters and normal demons that were always evil, a lot of the things you fight were good people who lost their souls, and usually their lives, trying to rid their respective worlds of evil or save someone who was trying to do the same. Many of the bosses and major monsters in both games sacrificed themselves trying to make a better place, and the penalty for that sacrifice was often that they became instruments of the very evil they were attempting to vanquish. It’s sad, and lends a tenor to the hopelessness of the experience. After all, you’re one of those people too… you just haven’t paid the ultimate price yet.

In any case, after a few rounds of cliff diving with the ghosts of old heroes, I was able to pump my stats pretty heavily, reaching 52nd level. The Dark Souls Wiki is clear that Blighttown should be my next objective, so that’s where I went.

I managed to miss both campfires in the place, so when I finally died after making incredible progress, I decided to call it a night rather than go all the way back through the Depths again. Tomorrow I’ll find those campfires. Chaos Witch Quelaag rules in Blighttown, and I have a Drake Sword with her name on it!

Hello, I’m the Blighttown Swamp. Think of me as the sewer below the sewer.

Even Demon’s Souls lacked some of the pure spitefulness of this outing. Why then do we continue to play, enthralled, as other games sit by the wayside? Ask Edge Magazine:

If you steel your nerves and persevere, the loot you’ll uncover is an adventure so exquisitely morose and far-ranging that it will tug at your mind insistently during the hours you spend apart. After more than 60 hours into our journey, an NPC clucks: “How do these martyrs keep chugging along? I’d peter out in an instant.” We do so, quite simply, because other games feel comparatively bland, facile and unsatisfying. Few will complete Dark Souls, but that fact won’t nullify the adventures they’ve had straining toward its elusive summit.

My journeys in Blighttown – now so far beneath the Undead City that its own lofty heights were utterly forgotten – led me to a poison-mucked retaining pool haunted by blowflies the size of greyhounds. Even splashing around in the place poisoned me, but fortunately my escapades in Darkroot Garden amassed a large collection of Purple Moss Clumps, which cure poison. Toxin, however, is much worse, and only cured by Blooming Purple Moss Clumps, which are of course much harder to come by. I had to shepherd my small inventory carefully, watching out for Blowdart Snipers, whose toxic darts had killed me umpteen times before. I knew worse things were to come: I was approaching the lair of Chaos Witch Quelaag. But I’d made it this far!

One must never forget the importance of online play in the Souls games. As Bandai-Namco finally begins to get its server infrastructure under control, more and more you see ghosts of other players enduring what you’re enduring, and you know they see you. Messages left behind by others point to illusory walls, warn of impending danger, or describe weak spots. You cannot help but feel you’re not alone, even though you are so, so alone. Except when you are not, and those times can be worse.

Anyway, there I was, camped at a campfire in what looked like a big storm sewer drain. Let’s take stock here.

Hello, I’m a Black Phantom. You don’t know me, but I’ve invaded your world and now I’m going to kill you.

Okay, breathe. It must be here somewhere. Breathe. Eight doses in the Estus Flask. Just repaired my armor. Breathe. Okay. Just… calmly inspect the area. Aha! There he is! Hahahaha, you spawned in the poison! I’ll just watch your health drop as you approach and then I’ll finish you off. That’s what you get for invading someone else’s world. Oh, are we in range now? Say hello to my little friend! It’s called the Black Bow of Pharis +4! Pow! Pow! Pow!

Wait, what? There are two of them now? Is that even allowed?! Is that possible??? What the crap is-gurk.

Ah, back to life. Well, back to undeath. I hope you choke on it, you stupid other players. Well, I guess if you have to get invaded, it’s best to happen when you’re literally three feet from a campfire. There are my souls. Slurp.

Hey look! I dropped a point of Humanity with my souls. Heck, I’m here, I’m zombies, I might as well crack that guy and be alive for like nine seconds. Crack.

Hi there, meat shields guys. Glad to see you. Would you fellows happen to know where to go?

Ah, you do. Good. I’ll just take up the rear here. Watch our six, as it were.

Seriously? Only once before in 60 hours of play and now three times in a night? Screw you, Bandai-Namco, with your stupid improved servers. Fortunately it’s three against one! Guys, kill him!

Outstanding. Now on to the Chaos Witch. I love being alive. Mute friends lend a sense of comfort to this hole. 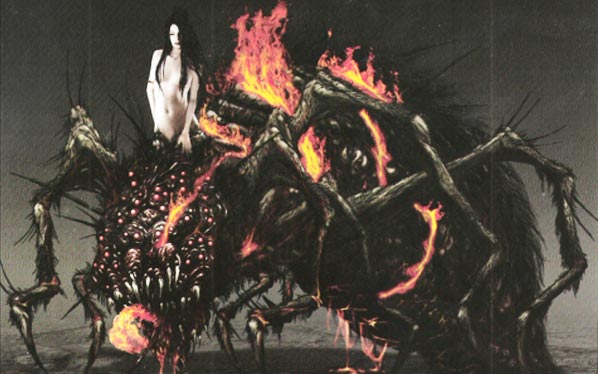 Hello, I’m Quelaag the Chaos Witch. I have a very pretty face but as you can see I don’t really do any work “down there.”

To her credit I will say Chaos Witch Quelaag is a pretty scary monster. Gaping Dragon was certainly the most repulsive I’ve yet encountered, but the Chaos Witch is unquestionably the most hideous. For those of you who’ve read Michael Ende’s The Neverending Story, if you’re anything like me the mental image of the monster Ygramul the Many will be forever affected by your viewing the above photo.

Quelaag’s upper self fights with a long-handled blade while her spider body spews lava; a double-threat challenge made worse by the fact that the lava doesn’t go away quickly. Very soon she’s covered much of your battle area with burning, liquid-hot magma, making the floor as deadly as she is.

All that in mind, I can’t say whether or not Chaos Witch Quelaag is hard when you’re alone. I can say she’s not much of a challenge when you’ve got two ghostly friends helping out. We triangulated in, making it impossible for her to face more than one of us at a time, and took her apart in fairly short order. As always, the other players I’d summoned vanished upon the boss’s fall. It was sad to watch them fade once Quelaag was defeated, without even a chance to thank them.

Down the steps from Quelaag’s lair are more steps, followed by even more steps. And then an antechamber – at this point I’m getting nervous that I’ve encountered no enemies – and a big wooden door, and… huh?

The Bell of Remembrance!! Who put that thing down here?

Okay, I have good news.

Good news: I found the Bell of Remembrance! I rang the bejeezus out of that thing.

It looks like the ringing of the two Bells has caused the enormous door in the Undead Parish to open. Well, that’s a long way away, that door. Instead I think I’ll head down these stairs. I’m already below the sewers, how much deeper can this place go? 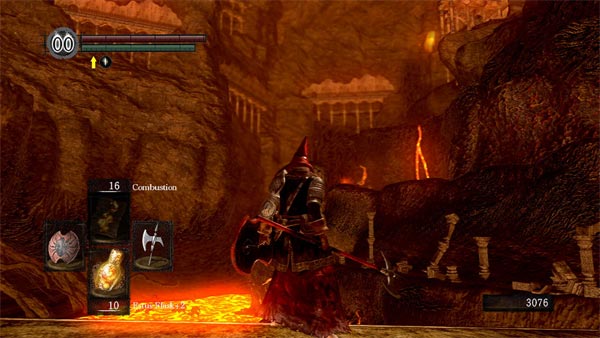 Hello, I’m the Demon Ruins. You might want to consider turning back. Just a thought. No pressure.

Okay, so, basically, below Blighttown is Hell. I don’t like the Demon Ruins. It’s hot here, and there’s a big ditch full of Capra Demons and Taurus Demons, both of whom were terrifying bosses. I don’t want to fight six of each. Upward!

Sunlight. Well… gloom. But gloom lit by the sun. Better than where I was.

Holy majolies, there are like fifty people and one… giant… snake-dog-thing… all milling around Firelink Shrine. Hello, people! Hello, giant snake-dog-thing!

What do you mean, “the campfires have gone out?”

What do you mean, SOMEONE STOLE THE FIRE??????? Was it the giant snake-dog-thing? No, it’s friendly.

Sigh. I guess I have to do everything around here.