Last week I posted about a crowdfunding project. This week, I’m posting about another. And let me tell you, it is completely –  completely – different.

The headline says it all. For a small investment, you can help German director Uwe Boll make another Dungeon Siege movie. The official title of the film, should it get off the ground, will be The Last Job: In the Name of the King 3. The plot synopsis is on Boll’s personal crowdfunding page. If you want to know without clicking, here’s a preview:

Hazen Kaine, an American contract killer living in Sofia, Bulgaria, gets more than he bargains for when he enters into a contract with the mob. One last job before he gets out and starts a new life for himself. The targets; the three children of royal billionaire Andon Dupont. Seems simple enough, or so he thought. Hazen apprehends the children and before he can blink an eye, a simple necklace worn by one of the children, sends his life spireling [sic] back to medieval times.

Does that not sound like the plot of a film that will truly stand the test of time? No? Not even with the typos? It does go on from there.

In case you aren’t aware of Boll’s pedigree, by the way, there’s also a summary of that on his site:

His work includes several films adapted from video games. He finances his own films through his Boll KG production company. Many of his films are based on video game franchises, produced on a low budget and are direct-to-video which has caused derision from the gaming community.

Does his name ring a bell yet? Here is a list, Rotten Tomatoes links included, of a few of the other video game films he has directed:

Did you even know that Far Cry had a movie? Did you know it starred a German guy, for no real reason, and was amazingly terrible?

It was so truly bad-good that I am struggling not to laugh out loud just thinking about it.

I confess I am a lover of camp. I know I have not seen many films declared to be the best, but I have seen most films that have been declared to be the worst. I have watched Glenn or Glenda multiple times (Plan 9 is a safe answer for “worst Ed Wood movie,” but Glenn or Glenda as a half horror-film, half personal-confession-about-identity is so much more fascinating). I saw Manos: the Hands of Fate, Rifftraxed live last week. I never miss a Smithee Awards ceremony. I have enjoyed many of the offerings from mockbuster studio The Asylum.

And I own this poster. 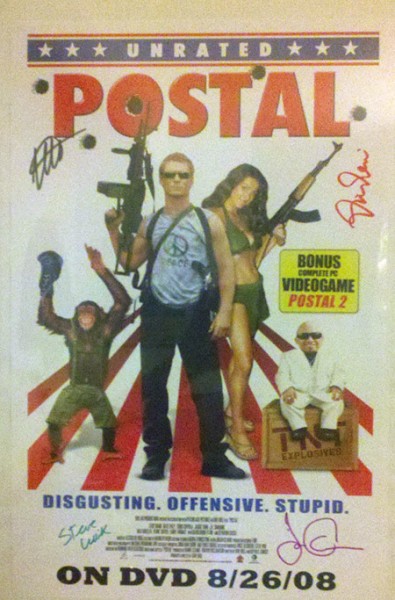 I like that he’s kind of a villain, but he doesn’t really care. I like his self-aware sense of humor about his work. I like that he just keeps trying to find new ways to make terrible things. When his films are self-aware, I genuinely enjoy them. And obviously there is a method to his madness.

There was a rumor that Boll had a clever strategy for financing his earlier films. In Germany, a filmmaker was (at one time) reimbursed in taxes for a film, if the film had a connection to a German-based production company such as Boll’s. The biggest gains in tax money actually happened, however, if the film lost money. It may have (allegedly) been possible to make a tidy profit this way… making deliberately terrible movies. You can read more details about this at Cinema Blend, though with a dollop of hate that I don’t personally share.

If you’re following me so far, Boll had economic incentive to make lots of movies that lost money…and to make as many as possible as quickly as he can. Sadly, it is quite well known: if you want to make a terrible movie, you almost can’t go wrong with licensing a video game. This may go on to explain why Alone in the Dark even has a movie, and why that movie has a hugely expensive-looking (yet paradoxically cheap-looking) action scene in the first act that is meaningless to the rest of the film.

This theoretical tax loophole money does appear to have dried up, however. Apparently, also, he has finally run out of Nazi gold:

Some theorized that Boll was at last defeated; once the loophole was closed, he’d stop trying to profit on it. Instead, he’s latching onto a new cockamamie scheme: the crowdfunding bandwagon. Being based in Germany, he’s got to crowdfund on his own site rather than go through a third party such as Kickstarter. But this has advantages. For example, this fundraising drive doesn’t appear to have a deadline. That’s good, because apparently he still needs half a million dollars before his vision can be brought to the cinema.

I don’t post this as an endorsement, exactly. Please crowdfund projects you can believe in! But I, for one, am entertained by this development, and thought the internet might be as well.