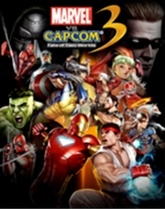 “As something of a novice in the fighting genre, I found the game’s immediate accessibility and accommodating attitude to button bashers a welcome introduction. Once you learn how the game works however, there’s also a deeply engaging and rewarding fighting system to get to grips with; one that involves practice but encourages flexibility and experimentation”

If there’s one thing this generation of consoles is teaching me, it’s that I’m absolutely no good at fighting games. Don’t get me wrong, I’ve certainly never tried to claim anything to the contrary, but even at the lowest levels of online competitive play and compared with my modest expectations, I’ve found myself humbled time and time again. I’ve come to the conclusion that somewhere between my stubby sausage fingers and my brain, something just isn’t wired up right. I found Street Fighter IV a harsh and ultimately frustrating lesson in how to fumble my way through several missed Hadukens and Shoryukens before eventually deciding I was never going to be good enough to compete and gave the game up for good.

For fighting game novices like me however, Marvel vs Capcom 3 is something of a blessing. At first glance, it’s an explosion of colour and activity. A button basher’s paradise. Delve deeper however, and there’s an added layer of complexity which begs to be mastered.

Compared with the relatively complex Street Fighter IV, Marvel vs Capcom 3 is a fairly easy experience to get to grips with. As a complete newcomer to the series and having never played either of the previous installments, talk of three-way battles and aerial combos felt alien and confusing, but within just a few short bouts against an AI set to normal difficulty, I felt confident that I at least had the basics locked down. Accessibility is clearly something that Capcom have worked hard to improve from other fighting games in the market – including their own – and it comes as a huge relief to those of us who normally find the complex nature of a competitive fighter intimidating.

Basic attacks are mapped to just three face buttons, comprising of light, medium and heavy attacks. Learning to chain together these moves and create opportunities to unleash more powerful aerial and hyper combinations is key to your eventual success, particularly against tougher opposition. Naturally, those who grasp this easier-said-than-done mechanic the quickest will prosper the most in the online arena, but the less skilled or newer players will find this is a system that can reward mashing the keys with your palm just as much as it does quick thinking and a trigger finger.

For these people, Capcom have included Simple Mode, a controller setting which essentially strips away much of the game’s complexity and reduces the combat to a much more user friendly format. The trade off here is a lack of variety at the expense of greater simplicity. Using simple mode, your fighters’ move sets are greatly reduced to just a few chosen attacks, with much of the cooler stuff (such as Dante’s devil form) remaining strictly off limits. What you do gain however is the power to launch devastating and otherwise complex assaults with the press of a single button. As an example, the medium attack button is no longer just a medium attack, replaced instead by a flurry of combinations that would have taken a degree of skill and 4 or 5 more inputs to achieve on a normal setting. Experienced players will roll their eyes at this for sure, but for the n00bs amongst us, Simple Mode can serve as a valuable introduction to a sometimes confusing experience. If you have a bunch of buddies who want to enjoy the game without any prior experience of a complex fighter, then Simple Mode will also provide a valuable “go to” option for them. It’s the mode that allows them to press a single button and watch cool shit happen on screen, and thus breaks down some of the barriers of entry between a novice player and a complex fighter. For this alone, its addition here is welcome. 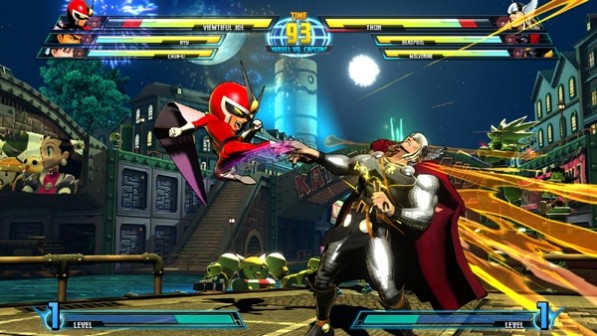 Anyone serious about their time with Marvel vs Capcom 3 will however want to keep their time spent with this mode down to a minimum or avoid it entirely. Not only will the obvious use of Simple Mode earn you rightful scorn from the online community, but it will deny you full access to one of the most deceptively complex and enjoyable fighters currently available. I quickly found myself defaulting back to the normal control configuration (at the expense of my online wins to losses ratio) largely because of how restrictive Simple Mode feels once you’ve sampled the normal gameplay experience. Marvel vs Capcom 3 can become incredibly hectic and at times even difficult to follow, but when things start to click it offers an insanely fluid and rewarding combat system. Exposing an opponent’s weakness with a flurry of combinations and team assists is intensely satisfying and looks incredible to boot, thanks to a slightly cel-shaded and comic book style visual upgrade that really complements the games theme and character design.

Marvel vs Capcom 3 also offers several levels of depth beyond just going one on one with a rival fighter. The franchise’s signature three vs three system offers countless possibilities and as a newcomer to this mechanic I found myself amazed by the flexibility it presents. Choosing the right team and learning how to use them almost feels like an art form, one that will doubtlessly take time to truly master. Choosing the right team and then introducing them at the right times during a fight – be that as an assist or a straight replacement for your first choice brawler – can be the difference between victory and defeat.

Of equal potential to be as important in deciding the outcome of a match is the new X-factor power up, which can be triggered by pressing all of the attack buttons at once. Lasting for a limited time, X-factor increases the damage done by your attacks and recovers your character’s depleted red health for the duration of its activation. Using this at the right times can swing the fate of a battle in an instant, which can be frustrating if you’re on the receiving end of a come back beating because of its use. Some will however suggest that its effectiveness is perhaps a little too significant, which others may find a valid criticism. Personally, I’ve not found it to be too much of a match-breaker either way.

The three vs three system works to such a degree largely because of the fine job Capcom has done balancing the characters. Having used the majority of the game’s 36 heroes at least once, I can genuinely say that I found each of them to present a variety of pros and cons. Sentinel acts as the only real “cheap” character of the roster and will probably be favored by inexperienced players due to his wide variety of devastating range attacks and sheer power, but even then he isn’t necessarily an automatic choice. The character variety certainly makes it harder to choose and stick with a settled stable of three fighters, but it also encourages you to use a much wider selection, rather than ask you to focus on mastering a single characters move set like in other fighting games. For the first time, I can honestly say that I’m looking forward to seeing what DLC comes along later. The 36 characters included on the disc give me much hope that future additions will actually be worth adding to your roster, and not just re-skins of existing characters or move sets.

Unfortunately Marvel vs Capcom 3 is let down a little by some notably absent game modes and features. Play is limited here to a short six stage arcade mode, local multiplayer, training and ranked or unranked online modes. In its current state, the net code isn’t exactly perfect either. Although fights generally run to a good standard when things get going, you may see the words “Failed to Connect” an irritating number of times before you get to that point. Naturally, this can be frustrating, particularly as the game boots you back to the home screen instead of offering a simple “Search Again” option when this happens. Online lobbies also lack the option to save or spectate other people’s fights, which hurts even more given how spectacular your average battle between characters such as Wolverine, Iron Man, Albert Wesker, Dr. Doom and friends tends to be. Unlockable extras are also kept to a relative minimum, although individual endings and profiles for each character serve as rewards for completion of Arcade Mode, which offers a degree of re-playability.

Despite these minor quibbles, Marvel vs Capcom 3 is a game I find easy to recommend. As something of a novice in the fighting genre, I found the games immediate accessibility and accommodating attitude to button bashers a welcome introduction. Once you learn how the game works however, there’s also a deeply engaging and rewarding fighting system to get to grips with; one that involves practice but encourages flexibility and experimentation. With a stack of fan service available for fans of both Marvel and Capcom franchises, a great visual style and a gameplay experience that is just an absolute blast to play, Marvel vs Capcom 3 is a beat-em-up mash-up not to be missed by newcomers or enthusiasts alike.

3 Responses to Marvel vs Capcom 3