Hi, Tap-Repeatedly: I just returned from another round of PAX East in Boston, and I’m here to talk about the games I played at this event!

This is going to be a long series of entries, because it’s hard to fit everything I saw into just one post, and some things aren’t easily categorized. I also got some video interviews with developers this time around, and for those that turned out, I’m going to embed them within future posts so you can hear what the devs have to say in their own words.

Now, onto the games! In this entry: Metrico+, Party Hard, Ladykiller in a Bind, and Kathy Rain.

Metrico+ is a game that caught my eye with its unique style. The inspiration for its art is the world of infographics. The avatar – you can play as a man or as a woman – has to navigate a world of charts and bar graphs, leaping from graph to graph as they change and shift under his or her feet. The graphs respond to your motions, and puzzles involve trying to figure out which actions will cause graphs to move in which way to create a path you can traverse. It’s possible to get stuck, or fall and die, but the checkpointing, at least in the demo version I played, is very forgiving and focused on one screen puzzle at a time.

There are a lot of minimalistic puzzle platformers out there, but Metrico+ feels very purposeful in its design choices. It’s the work of artists that thought carefully about how to depict a graphic-design oriented world. The color palettes are soothing, and the human-shadow avatar has a fluid range of motion.

The original game, Metrico, was a PlayStation Vita release that relied heavily on the Vita’s unique control options. Since the game had to change a little going cross-platform, Metrico+ is both the same game as the original, and a fresh game, with controls more suited for a cross-platform release. It’s coming out for PS4, Steam, and Xbox One and is developed by a team homed in the Netherlands. They came a long way for the show! 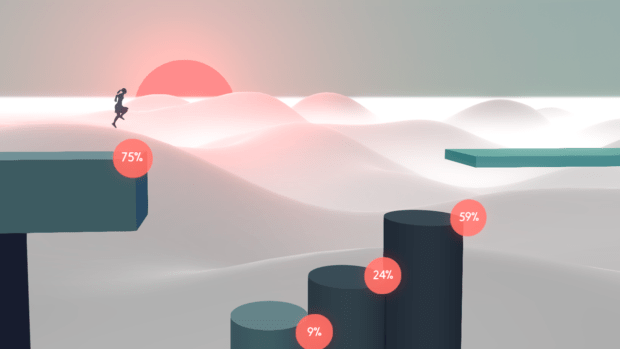 This is one situation where a developer sent me a random Steam Key out of the blue, and I played and liked the game. Party Hard is a top-down pixel-graphic Hitman style game. The objective of the game is to kill everyone – yeah, everyone – at a loud party. But get caught by the cops or killed yourself, and it’s game over. In order to wipe out the party, you can stab people individually (and try to hide the bodies), but there are also a number of devious traps you can set for people before walking away. My successful party kills involved a combination of approaches: sometimes waiting in a dark room for people to wander in to make out so I could knife them; sometimes poisoning the buffet; sometimes casually pushing people into open fire pits…

So yes, this is a cruel, violent game. But it has a Looney Tunes kind of sensibility to it. An out of control car may run over a half-dozen people, and everyone is momentarily shocked, but gets right back to partying. It’s a black comedy thing.

The game has annoyingly catchy music, but there’s a small touch that charmed me even more than that. If you have an Alienware PC (and I do, boast boast), Party Hard will also take over the color bar flashes on your hardware, making your PC flash rainbows when you dance and flicker bright red to highlight every quick kill. Kind of neat! The game also has a level editor and interactive Twitch integration, so you can design your very own interactive murder parties. 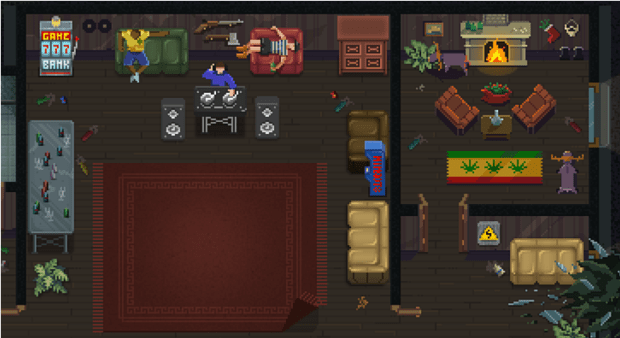 Ladykiller in a Bind

Let’s go right from murder to sex. The Indie Megabooth had a demo spot set up for Christine Love’s newest title: My Twin Brother Made Me Crossdress As Him And Now I Have To Deal With A Geeky Stalker And A Domme Beauty Who Want Me In A Bind!! That’s Ladykiller in a Bind for short. The demo was tucked behind a curtain so that only 18+ PAXgoers could play it. “Wouldn’t want to alarm the children,” said Love to me, as she pulled aside the velvet rope and into the scandalous Ladykiller booth.

Even the brief 10-15 minute demo contained some nudity. I’m sure you get the gist already from the title alone: this is a visual novel about queer and kinky situations. Your character (a lesbian, forced to disguise as a boy, as the title helpfully explains), is trapped on a cruise ship and must successfully navigate the world of her brother’s social relationships without making people too suspicious. The story progresses in text and visuals. You can occasionally interject a comment or respond to a choice, though it’s also possible to not do anything a lot of the time and simply watch characters converse. After a while, the dialog interjection you could have made disappears as the conversation moves on without you. It’s an interesting model that, once you get the hang of it, feels a lot more like a real conversation than most menu based chat. Acting strangely increases the “suspicion level” other characters have of you, which… may not necessarily lead to a game over, but may limit or increase your options, or get you into increasingly dangerous or danger-sexy scenarios. 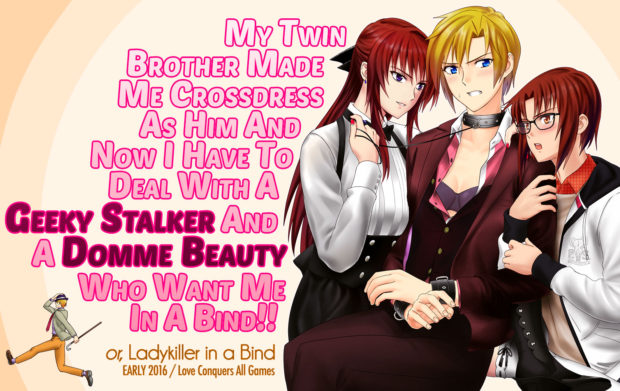 I was surprised at how many choices and action prompts there were in this demo compared to many other visual novels I’ve played. They may be packed in a bit denser for the sake of a demo experience. But if the final full game is anywhere close, it would easily explain why this newest game has taken Love about four years to create. The release date is “coming soon,” though I think this title may be too steamy for Steam.

Kathy Rain is a game suited to my personal tastes for sure: a murder mystery adventure game starring a badass lady. “It does look a bit like a Wadjet Eye Game…” said the developer behind my shoulder, as I sat down to play. I turned my head and realized he was talking to Dave Gilbert, who took up the demo spot next to me. PAX!

So yes, if you’ve played a Wadjet Eye game, and I’ve enjoyed many of them, this game will seem familiar. In the initial demo, I didn’t do much puzzle solving, but got a peek at the story. It’s a pretty straightforward one: protagonist Kathy is a cool chick who is returning to her small hometown for her grandfather’s funeral. As she digs a little deeper, she discovers his death occurred under some mysterious circumstances, and decides to investigate. The game is set in the 1990s, so combined with the format I think I’m going to be drowning in nostalgia playing this title. This is coming to PC and iOS next week, and I hope to be able to play the whole thing. 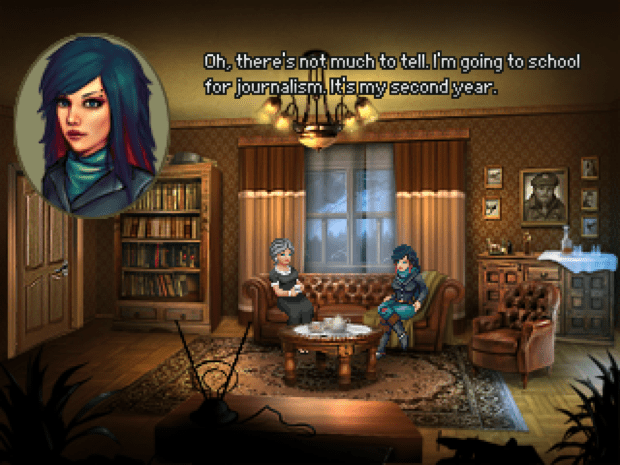 I will confess that, going into PAX this year, I was a bit worried that this show was (pardon any pun) past its prime. I think my focus on playing mostly indie games this year was what kept me energized. There are so many games out there worth a look that it’s very hard to see everything, and though I hit tons of games on the show floor and came home tired, I actually left wanting more. Fortunately, I already got my tickets to PAX Dev…

Next post, I’ll talk about some of the VR games that I saw and played at PAX!

Knee-Deep in the Dear John

Taboo Snaps – A game for REAL men (and desk jockeys)