Lew took me to a quiet picturesque meadow outside Divinity’s Reach where he briefly showed me underwater exploration and combat. After spending several hours on solid ground it felt odd but exciting to be able to move in all directions at will. I also noticed that my gear changed when underwater. No longer was I wielding an axe and shield, I was equipped with breathing apparatus and a harpoon which incidentally opened up a bunch of new abilities to unlock and try out. I’m very eager to see where ArenaNet take this side of the game because it felt totally unlike anything else; I foresee deep crevasses holding all sorts of wonders and horrors. Emerging from the water with my Charr’s head and the surrounding lush greenery reflecting on the glistening surface, we brought up the menu and headed off to the player versus player area called The Mists.

The Mists were a bit of revelation to me for a couple reasons. Firstly, it had a proper tutorial introducing things that would have been useful to know when I first started playing the game, and secondly, it gave me a glimpse of just how mind-bogglingly deep Guild Wars 2 is behind its disarmingly beautiful exterior. I noticed in the PvP area that my Charr looked different and was kitted out with a couple of gear sets fully unlocked and filling out my ability slots at the bottom of the screen. Guild Wars 2 allows you to equip up to two sets of weapons, each set comprising of either a main weapon and an offhand weapon, or a single two-handed weapon. At the press of a button it’s possible to switch from one set to another totally changing the combat style of your character in an instant. Coupling this with your race and profession-specific abilities you’ve got a frighteningly heady mix of possibilities. And this is just the tip of the iceberg. If PvP’s this deep then what about the world versus world versus world stuff that I haven’t seen yet where different servers are pitted against each other in huge Enemy Territory-style objective-based wars involving siege weapons and potentially hundreds of players? Yikes.

Okay, I ought to start wrapping this up, I can hear brevity turning in its grave. 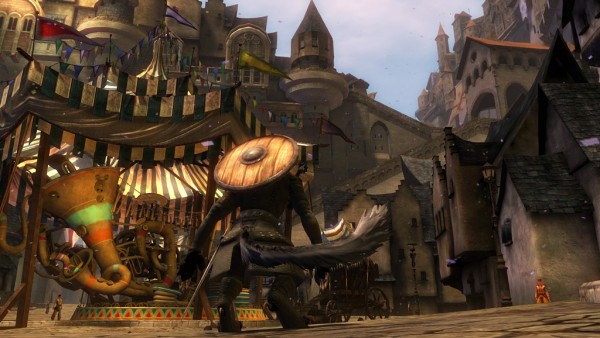 It sounds as if I didn’t have a particularly good time with the beta but the reality is when I got home on Monday I was gutted that I couldn’t just fire up Guild Wars 2 and explore more or do whatever the hell I wanted to. Since the weekend I’ve been trying to put my finger on what exactly it is that’s making me want to play more though. It looks gorgeous throughout and there’s a palpable buzz about the game from the outside and even more so when you’re surrounded by others playing it. The combat’s nuanced, satisfyingly punchy and responsive especially given the usual collision-detection-lessness of MMOs. But neither of those things are it. In What Makes Games Good, Tom Francis suggests six elements that contribute to making a game good: challenge, feel, freedom, fantasy, place and promise. Guild Wars 2 manages to confidently nail all these, with promise being the key thing here — Guild Wars 2 has heaps of it. Just from speaking to Lewis I know there’s so much I haven’t experienced: WvW, ‘structured’ PvP (ie. balanced PvP), tournament PvP, dungeon crawling, large scale dynamic and world events, the personal story arcs for each of the five races, crafting, other parts of the world itself. Oh and platforming bits. And Asura Chess. And something my brother called ‘Keg Brawl’ which he described as ‘Rugby on ice, no holds barred’. It’s exciting, and who knows what else there is?

Earlier on I compared Guild Wars 2 to a theme park and as I get further away from the beta weekend I’m starting to realise that there’s a lot more truth to that than I’d initially thought. Guild Wars 2 has no recurring fee to play, it’s just a single payment to gain access to everything the game has to offer. There’s no prescribed way of playing it either, if you want to just bumble around exploring by yourself or with friends (or strangers), that’s fine — there’s a fuck-ton to see and get involved in. If you want to jump into PvP or WvW (perhaps one of the most exciting aspects of the game for me) you can do that straight away, you don’t even have to be lumped into one part of the traditional MMORPG class trinity either — any profession is viable, solo or otherwise (which is brilliant). If you don’t fancy any of this and want to be involved in a directed story then you can pursue your character’s personal story arc, on your own or with friends. It’s all entirely up to you. I haven’t really scratched the surface here and even though the introduction I experienced wasn’t as user-friendly as I’d hoped or expected I’ll undoubtedly be picking up Guild Wars 2 when it’s released this month. What the hell has my brother gotten me into…?

To contact the author of this rambling drivel email greggb@tap-repeatedly.com