According to our header, you come to Tap-Repeatedly for the media, the opinion, and the attitude. But maybe, occasionally, some news? It’s been a week since PAX and I’m still writing up things that, while an entire week old, could be technically considered “news.” Now if you read the Tap-Repeatedly forums, you’d have gotten this information the day I got it, since I dropped up my rambling thoughts the day of the event. But if you didn’t, you still win, because now you get this information: with all-new screenshots! So, without further introduction, here’s the games I played at the SquareSoft press event at PAX East! Plus the bonus of opinions and attitude.

Why did I make a point of going to the SquareSoft demos? I’ll come clean. I’m an old-school Final Fantasy fan. The series started to lose me around the 3D era, and I haven’t finished an FF game after 8. So I’m in to Final Fantasy mostly for the nostalgia factor, at this point, and remembering the great times I had with the 16-bit and early 3D titles. 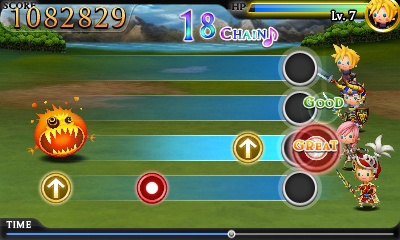 That’s why I’m going to lead by talking about Theatrhythm Final Fantasy, a game that I think may have been made specifically for me. See, I’m interested in Final Fantasy in theory, but any time I pick up one of the new games I feel like an out-of-touch old woman. I can’t figure out the combat, I don’t understand what people are wearing, and everyone keeps talking about… L’Cie, or something.

On the other hand, listening to the lovely strains of Terra’s theme from Final Fantasy VI is like coming home. And Square, with the work of development house indieszero, grafted a small but engaging new game type on to my nostalgia trip. The mechanics of the game are reminiscent of Elite Beat Agents. Tap and drag the stylus in time with the tune on screen. Different “modes” play out essentially the same way, including a battle-style sequence where the game’s boss or fight music plays. Your party of warriors, made up of characters from the different FF games, stand on the right side, as they would in any other battle, and make hacky-slashy motions at the monsters until they are all defeated, or, until you fail the song. 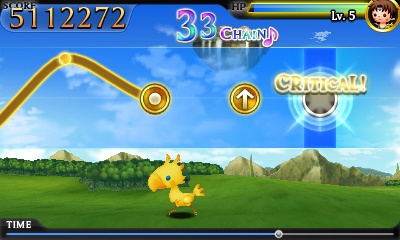 It’s really charming. There seems to be some attempt, with the party of warriors, to graft RPG mechanics on to this, with “leveling up” and so-on. I guess that leaves a little room for it to get screwed up somehow, the same way Dissidia had so many RPG mechanics on it that the fighting game felt secondary. But as long as the game continues to work on its solid rhtyhm premise, it’s a winner in my book. It’s like being able to remember playing a Final Fantasy game, without all the grind of actually playing a Final Fantasy game.

Speaking of Final Fantasy nostalgia, I also got a little crack at the new Kingdom Hearts title: Kingdom Hearts: Dream Drop Distance. (I think that’s supposed to be abbreviated Kingdom Hearts 3D, but, Kingdom Hearts: DDD sounds so much funnier to me because it’s vaguely giggle-worthy.) I’m also a fan of this franchise, but it’s admittedly lost me over the past few years with its series of one-off spin-offs and prequel games. I think I own every Kingdom Hearts game, but I can’t really tell you what’s going on in the story anymore. 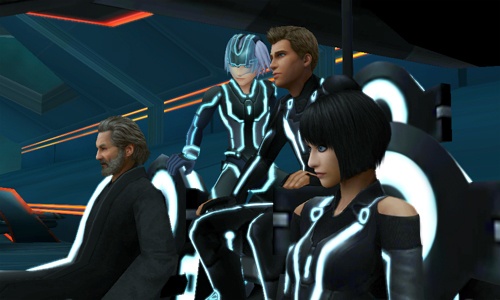 DDD (lol) is sort of a return to the old formula in that department, and, sort of not. It’s a sequal, at least, but more of a Kingdom Hearts 2.5 than a Kingdom Hearts 3. Like a proper Kingdom Hearts sequal, it includes Disney-themed areas for our heroes – both Sora and Riku co-star in this title – to run around in. Some new and sort-of-new worlds are confirmed to debut in this title: Tron: Legacy, The Three Musketeers (based on the old Mickey/Donald/Goofy cartoon), Hunchback of Notre Dame, and Fantasia-themed areas will be playable, with possibly more to be announced. The game will also have some cameos of characters from the (very cool) DS RPG The World Ends With You. I’m not sure what to expect out of a Fantasia level, but I’ll make a very conservative guess and assume that means “The Sorcerer’s Apprentice.” I don’t think we’re lucky enough to get dinosaurs or scantily-clad centaurs. But I can dream.

The level on display at PAX was the Tron: Legacy level. The action in the game seemed up-to-par with the older Kingdom Hearts titles, so I wasn’t disappointed by that. The character models for Tron — including Jeff Bridges and his evil counterpart, Uncanny Valley Jeff Bridges — look pretty good in the style. Since there was a Tron level in Kingdom Hearts II, seeing a Tron level here isn’t really a shock, but it’s a nice tie-in to the new film. 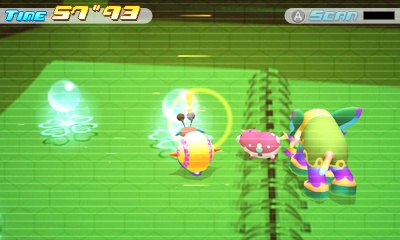 This game could be a standard sequel and be all right. But it is trying to innovate just a little, and I’m not sure how to feel about it. Instead of being followed around by Donald and Goofy or other Disney companions like in the older titles, Sora instead fights alongside little dream creatures. The screenshots tease an AR-style component that allows you to find these creatures in the “real world” and port them in to the game. In the game, they level up with you, can be swapped out at will for other critters, or can combine together for a gestalt super form. It’s kind of like someone got a little Pokémon in my Kingdom Hearts. I’ve never been big on monster-training games (I’m here for the Final Fantasy and the Disney), so this may not appeal to me in specific but it’s an interesting use of the device. 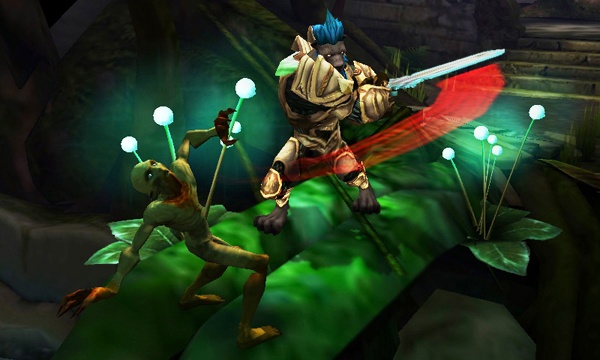 Heroes of Ruin was the only game in Square’s 3DS lineup I came in with no opinion or knowledge about. A co-op focused, Western-style fantasy game on the 3DS, it plays kind of like a cross between Gauntlet and WoW. Basically, the player rounds up a friend or three. The party gets quests from a guy, then goes in to a dungeon, then beats all the bad things up with swords and magic and such. They skim a bunch of text (because who has time to read quests when you’re hack-and-slashing?), and collect a loot. Rinse and repeat. I generally like dungeon crawlers, but there wasn’t much about this one that made it stand out to me compared to playing this kind of experience on the PC. I thought to myself: maybe I’m not the target audience for this. But it’s a co-op game on the 3DS, and even with network connectivity I wonder how hard it would be to find three friends interested in playing it if I was.

I checked out two non-portable games as well: the hands-on demo for Quantum Conundrum, and the hands-off demo for Hitman: Absolution. 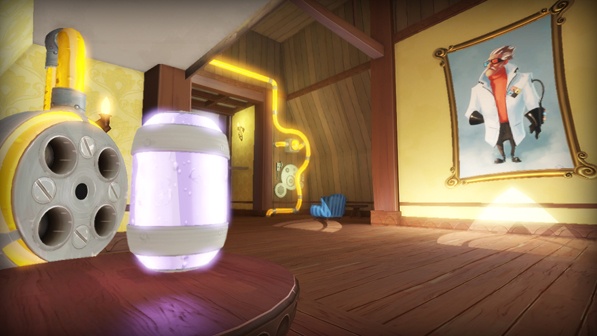 Quantum Conundrum seems sort of fun, but I don’t know if the slice I saw during the demo was enough to hook me totally. This is, famously, Kim Swift’s new title, and since it’s another 3D physics-based puzzler comparisons to Portal are inevitable. In Quantum Conundrum, you’re given a device that you can use to switch between different physical dimensions. In the demo, this was a “heavy” dimension, where all objects weighed much more than normal, and a “fluffy” dimension, where all objects were light. Changing the density of the objects is required to get through certain puzzles. For example, one button makes a metal safe light, so you can throw it, then make it heavy again just in time to block a deadly laser beam.

It’s a cool mechanic, and the different graphics in the dimensions are cute and inspired (in the fluffy dimension, all walls are padded). Visually it has almost a Psychonauts vibe, if slightly less stylized, and I am so down for that. But it’s missing a little something-something with the eccentric old uncle voice in place of insulting GLaDOS taunts. The second half of the demo relied a lot on platforming, too, which was fairly standard stuff, only in first person so you can’t see your feet. I guess what I’m saying is I could’ve done with just the first half. 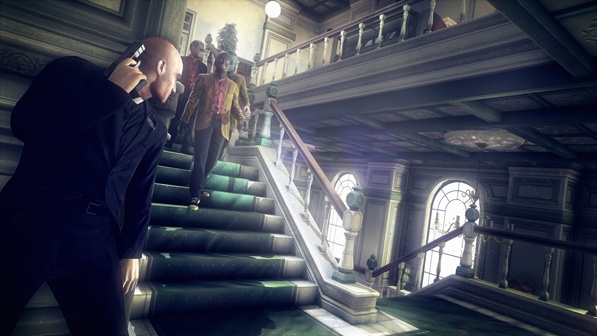 Hitman was a hands-off demo, so of course they can make you only see the parts that are working. Now based on that, it looked great to me. The demonstrator started with a speech about how they had made the game more actiony, so as not to punish people who wanted to do a little more gunplay. My initial thought was to gird myself for disappointment: “oh, they dumbed Hitman down for the CoD crowd.” But the demo showed that stealth gameplay was still very much still in the game.

You have probably heard reports about the demo, but, if you haven’t: the PAX demo takes place in an orphanage level. This is apparently a Catholic orphanage, with a well-conceived environment. It’s possible to run through the whole demo level with a “professional” approach (hiding bodies, sneaking behind cover, and using disguises), with an “action” approach, or with some combination of the two. In “action” mode, Hitman: Absolution is more of a standard cover-shooter, but there are a lot of environmental weapons to pick up and use (enemies’ guns, crucifixes, etc), and a bullet-time like mechanic for called shots. If playing as more of a professional, the player can sneak around without being spotted. Key features of the older games are still present here: disguises are robust, and the player has to dump bodies or suspicious evidence to cover Agent 47’s tracks. The game got some laughs when one thug’s body was dumped in to the ball-pit in the orphanage play room. The bad guys also have pretty cool AI variety, with lots of different sound drops for the thugs. 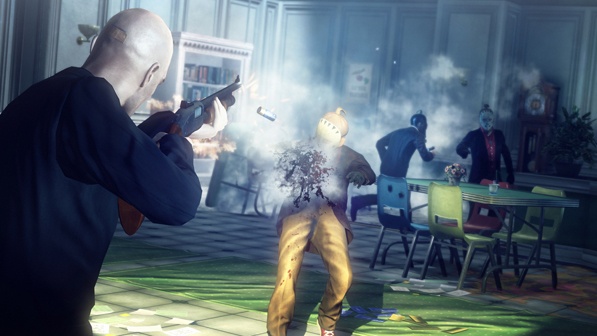 It remains to be seen if this level of detail can be borne out for a full-sized game. If it can, this is one to look forward to.

So that’s all the Square previews I’ve got. At a show like PAX, there’s not enough time to see everything at once, especially not everything AAA which tends to have long wait times.  So, next previews: indies.

One Response to SquareSoft Demos at PAX East