I’m not what you’d call a “good” camper. The thought of sleeping on the ground while all manner of critters crawl hither and yon over my body is not my idea of fun… and we won’t even mention the lack of decent bathroom facilities while communing with said nature. My idea of camping is staying in a hotel room overlooking the campgrounds with hot and cold running water, electricity and room service. If I were a ship-wrecked castaway, I’d be the first one killed and eaten due to my incessant whining about the dirt and bugs.

Not so Mina. Mina’s the type that can weave bamboo into baskets, start a fire using flint and some errant piece of metal and tame wild monkeys all without breaking a nail. Okay, that last is made up. Maybe. Who’s Mina? She’s an accomplished sole-navigator sailor out to set an around-the-world record with nothing but her sailboat and a tricked out watch/phone/GPS combo strapped to her wrist… until she’s washed overboard during a bad storm and wakes up on a uncharted island unable to make contact with the outside world.  And that’s where we first meet Mina. It’s your job to not only help her find a way off the island, but you’ll also need to solve the mystery of who lived on this island before her arrival and who may be watching her. 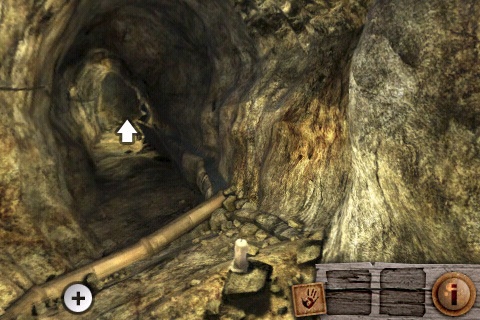 All the cool kids live in caves.

Déjà vu? Nope, this is a direct port of Kheops Studio’s Return to Mysterious Island released back in 2004 for the PC. With its touch and drag mechanic, the iPhone is tailor-made for traditional point-and-click adventures. Unlike Broken Sword: Shadow of the Templars – Director’s Cut for the DS, there are no additional story elements; however, some gameplay tweaks were done to perhaps account for the scaled-down medium and lack of a large hard drive

Like the original, the game is played in a first-person, node-based perspective with 360 degree panning by simply touching and dragging your finger around the screen. Interactive objects will appear with a bull’s-eye over them, while the exit to the next node will show as an up arrow. You can turn this feature off in the options menu, but then you’ll spend a lot of your time randomly touching objects to see if Mina will automatically pick it up or offer some observation about the item. If you elect to turn off this “permanent” help, you can touch the “more help” icon in the lower left of the screen which will display all exits and/or interactive hot-spots. They’ll remain highlighted  until you either turn it off or move to the next scene. This is a really nice feature if you want to immerse yourself in the “lone survivor” experience; however, since I’m such a candy-ass I chose to leave it on.

Return to Mysterious Island suffers absolutely no graphical degradation in its migration to the smaller screen. The game is still as lush and vibrant as on the PC. Truth to tell, I actually loaded up the PC version just to see if I could see any variations. The only difference I noticed was how this version handled the cinematic scenes. In the original, all cut-scenes are sepia-toned pen and ink drawings, but you get the full-on audio of whatever action is depicted. In the new iPhone version, once again the cut-scenes are drawings; however, this time they’re full color pen and ink, which I think better bridges the gap between the interactive and non-interactive parts of the game.

Music and sound translated well to this version. In the case of the music, too well. Since I was using earphones, it’s very apparent that the music is on an incredibly short loop which got annoying. Really fast. I don’t think I was even aware of that in the PC version due to lots of other ambient noise in my computer room; therefore, turning off the music in this version became a priority.

The game generates a generic save at the beginning of each new area, of which there are only four or five. Much like reading a book with the Kindle app, if you need to leave the game in mid-chapter, it will remember exactly where you are and what you were doing. No manual saving is necessary. I should warn you – the game sucks down battery life like water down the drain. This is a short game, no more than 8 hours, if that; but you’ll not play through the entire game without re-charging the battery at least twice. 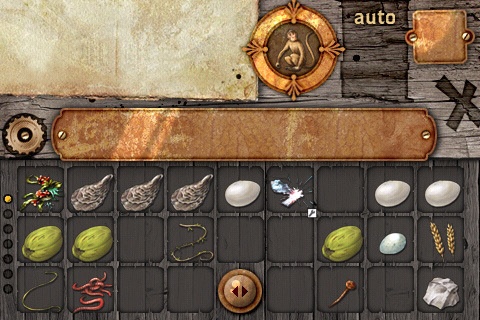 Mysterious Island’s main attraction is its innovative take on inventory items and how they’re used within the game. If you’ve played adventure games for any length of time, you’ve realized the majority of developers treat inventory items in the same manner – each specific object is meant for one specific puzzle solution – even though in real life items may serve multiple purposes. If developers are feeling especially motivated you might be allowed to use an item twice before it becomes dead weight in your bag of holding. What Mysterious Island’s developers have done is bring real world functionality into its game world – with the exception of a few items, most can be combined with other items to create a complex tool in order to solve a specific puzzle. Then, by de-constructing that tool back  into its base parts you’re able to create brand new items. Spoiler ahead: If, for example, Mina has a sharpened piece of metal, a forked stick, a vine, acacia thorns and worms in her inventory she can combine four of the items to create a fishing pole, catch a fish then break down the fishing pole and combine two of the items for a long-handled knife. End spoilage. But wait, there’s more! Not only can you create lots of different inventory items, you’ll also be able to solve some puzzles in several different ways – if you’ve used up your last piece of fruit to appease a threatening monkey, you’ll be able to throw some different items together in order to make friends with another monkey down the road. We’re not likely to see this degree of freedom in problem solving ever again. Embrace the difference!

While we’re on the subject of the puzzles, let me mention that the vast majority are inventory-based with just a handful based on found notes or logic. Both sliders from the original are gone from this version as are several of the puzzles based on Captain Nemo’s notes. Also, due to this version not including some of the original puzzles, you’ll end up collecting lots of stuff you’ll never use. I did run into a couple of issues: the cannon puzzle required an inventory item that didn’t make sense to my way of thinking; and the puzzle to enter the Nautilus was tricky because the buttons I needed to press were so tiny. If you’ve got fingers bigger than a pencil, you could run into problems tapping in the correct code. I also think some hot-spots were missing in a couple of places: closing and firing the cannon; picking up the robot thrusters; and talking to the final robot with its subsequent riddles. With the cannon, I just tapped around the cannon until the right thing happened; but if I hadn’t played the original, I wouldn’t have known to pick up the thrusters nor would I have known to talk to the final robot and how to answer his riddles. 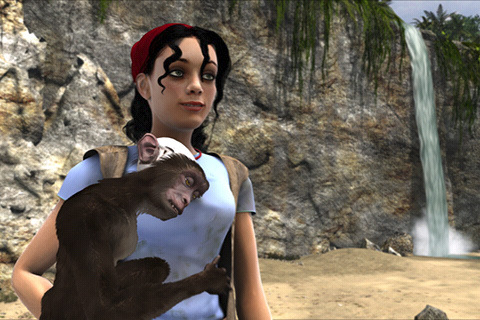 The only other issues I had with the game were some game notes were impossible to read because it was written in a light font on a light background and then there’s that whole needing to take notes in order to create a couple of the needed inventory items – which is next to impossible if you’re embracing the mobile gaming experience. Sure, you can write notes in the handy notepad app; however, you’ll need to leave the game in order to fire up the app, all the while chanting the things you need to write down so you don’t forget. Chanting in public can get you arrested. I can’t tell you how many times I had to re-read Captain Nemo’s notes just so I could build those freakin’ widgets! If you’re going to port a game to a device specifically made for on-the-go gaming, having puzzles where notes are required isn’t exactly conducive to a pleasant gaming experience.

Those minor negatives aside, Return to Mysterious Island is a sweet, fun little game. Mina is likable and isn’t voiced by one of the walking dead; the game’s challenges aren’t overly taxing and make sense for the most part unless you aren’t paying attention; and it’s visually appealing. All for the paltry sum of $4.99US on iTunes. You can’t ask for more than that.

With the release of Microïds’ Return to Mysterious Island 2 [PC] drawing near, Tetraedge has already released its Return to Mysterious Island 2 iPhone Extension which will allow players to take their game “on the road”. Players will be able to solve the game’s puzzles on the iPhone then sync up with the PC version to carry on playing. Cool beans! The app is free and compatible with both iPhone and iPod Touch (2nd generation).