In the early hours of this morning (about 5:20 am GMT), we were precisely one hundred years out from the moment when the RMS Titanic slipped once and for all beneath the waves of the North Atlantic. She took with her some 1,514 passengers and crew, a little more than two-thirds the total number of souls aboard. None of the survivors lived to see this anniversary. (The last passed away in 2009.)

Though she wouldn’t be rediscovered until 1985, the Titanic lived on fairly vividly, here and there, since the first word of the tragedy reached the world. The resurgence of interest in her story comes in waves, of course: following the release of the book and film A Night to Remember in the 1950s; the amazing images from the wreck in the 1980s; the release of James Cameron’s period epic Titanic (re-released in 3D to coincide with the anniversary), starring Leonardo DiCaprio and Kate Winslet, in 1997.

I think the night the Titanic sank must have been the end of the world as anyone knew it. She was the last gasp of human audacity and ostentation, of unbridled luxury for its own sake. The end of a world in which the only way anyone could imagine the two sides of the Atlantic would be linked was by such an engineering marvel. A scant two years later the Great War would begin, and for the rest of the century human ingenuity on any sort of large scale would be defined by conflict.

Perhaps the Titanic‘s popularity endures precisely because of the age it represents.  Regardless of the reality, the popular perception of the turn of the century is idyllic, optimistic almost to the point of naivete.  Maybe there was an outrageous class divide (fueled by corporate corruption) and a healthy share of imperialism coming from both America and Britain, and the powder keg that would erupt into World War I did not develop overnight.  But there must have been something truly astonishing in the air.  In the decade leading up to Titanic‘s launch, man learned to fly.  Guglielmo Marconi had proven wireless telegraphy possible, revolutionizing how people communicate across vast distances.  (Indeed, this technology would prove instrumental in rescuing Titanic‘s survivors.  Britain’s postmaster general said in the wake of the tragedy: “Those who have been saved, have been saved through one man, Mr. Marconi…and his marvelous invention.”)  Albert Einstein published many of his most famous theories, including general relativity.  The Ford Motor Company introduced both the Model A and Model T.  Motion pictures achieved their first major success with the twelve-minute film “The Great Train Robbery.”  Audio playback, batteries, lighting, and climate control all surged forward.

I suppose society must be in an optimistic place in order to build an enormous vessel of steel (displacing in excess of 50,000 tons), fill it with the most lavish furnishings available at the time, equip it to sail with more than 2,000 crew and passengers aboard, and call it “unsinkable”.  But contemporaries of the great ship could hardly be blamed for thinking they lived in an age of marvels.  (In fairness, Titanic had only been described, before her sinking, as virtually unsinkable or “designed to be unsinkable,” though the latter begs the question why it took shipbuilders so long to decide sinking was a bad thing.  In any case, she was not described – publicly, anyway – as flatly unsinkable until after that assertion had proven quite false.)  The very idea of the Titanic must have seemed absolutely plausible to anyone paying the least attention to the march of progress.  If we could coax a bunch of metal and canvas to stay aloft with a person or two aboard – in thin air! – then surely we must’ve got this sailing thing licked.  We’ve been doing it for centuries, and the ocean seems awfully supportive compared to the sky.

So the disaster of Titanic‘s maiden voyage must have been a wake-up call.  We are not masters of the universe.  There is still danger in the world.  We’ve never un-learned that lesson, for better or worse. 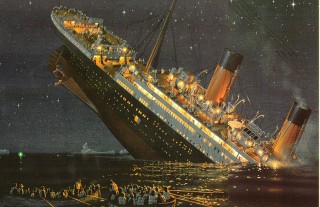 How can we, today, even begin to understand that perspective?  The modern world was forged in the fires of two World Wars and an even longer Cold War, with the realization that every great thing mankind did was, sooner or later, supposed to be a weapon.  Enemies on the other side of the world could hurt us.  Globalization did not make war obsolete, like it might’ve seemed at the turn of the century; globalization made war ubiquitous.  And a post-9/11 world knows that better than anyone, probably.  We are highly cynical, highly credulous people, relative to the passengers of Titanic.  There’s always a catch, always a danger.

Have you ever noticed that, despite its presence in the collective consciousness (especially at times like this), Titanic actually appears pretty rarely in pop culture?  It’s easy to point to the big examples: a couple movies, a book or two.  And they all deal with impending doom.  (Except Ghostbusters II, which dealt with it making port anyway.)  That’s inescapable in general, and we just fixate on it anyway.  We assume tragedy and call it “drama.”  Games are no exception.  In a medium that harvests history for each and every great set piece like there’s been a set piece famine for the last decade, Titanic scarcely ever appears.  When it does, it’s usually just referenced or alluded to, and it’s lucky if that reference is major – as with Starship Titanic, which features a massive starliner in a similar situation.  I’ve noticed one or two hidden object games that give Titanic some kind of title credit.

And then there’s Titanic: Adventure Out of Time from 1996.  This game may well have gotten me thinking down this path in the first place, though it’s hard to say for sure.  This game was built on the idea that Titanic was a historical lynchpin.  While every other appearance of the ill-fated ship in pop culture seem fixated only on its demise, Adventure Out of Time fixed on the (completely fictional) consequences of it.

The game begins (and ends) in 1942, with the aging player character (never seen, as this is a first person point-and-click adventure game) reflecting upon his ill-fated mission thirty years earlier.  He was a British secret agent aboard the Titanic with orders to recover a stolen copy of The Rubaiyat of Omar Kayyam.  His failure led to certain tragic events in the intervening 30 years, or so he believes.  And so it is this mission on which he is musing when…well, you can see: (skip to about 2:15 if you’re impatient)

The cloak-and-dagger plot aboard the Titanic only deepens as the player explores the vast virtual recreation of the vessel.  The research that went into the game was meticulous, and it is possible to visit many authentic locales aboard the ship from the famous Grand Staircase to the Turkish baths and the squash courts and the holds (where, yes, the well-known automobile transported about the ship resides).  Yet the crux of the story is all on the tragedies yet to come: though the ship’s sinking will obviously happen – it would be a waste of some major set piece material to allow players to avert that particular disaster – the most significant events of the next three decades, including both World Wars, rely on what occurs on the Titanic.  (There are, therefore, multiple endings to cover various scenarios, good and bad, and it was probably the first game I ever played that had the like.) 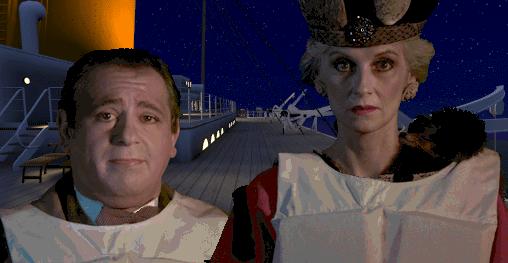 All endings apparently include angry spirits trying to get in the lifeboats.

Whatever can be said of the game (and much can), Adventure Out of Time tried to put the player in that place and time.  If the open-ended gameplay was not open-ended enough, there was an exploration mode that allowed players to just wander the ship.  The supporting cast, semi-animated with a uniformly ghostly pallor (whether intentional or not I don’t know), ran the gamut of nationalities and stations: Europeans, Americans, soldiers, psychics, con men, crew.  But the ship’s population is sparse, the random stand-ins stiff and moribund, everyone pale.  I’ve seen this complaint leveled at the game from other quarters.  Yet, since it’s been more than a decade since I last played it, I can’t help but wonder if the sense of impending doom I felt throughout was an accident, or built in by the designers, or something I brought with me, unable to view Titanic as anything but a disaster.

Sometimes I wonder why that is.  Is that my approach to the legacy of the Titanic – a vessel of which I’ve been extremely fond my entire life – or to gaming?  Is tragedy a necessary component to games – to us?  And if so – why? 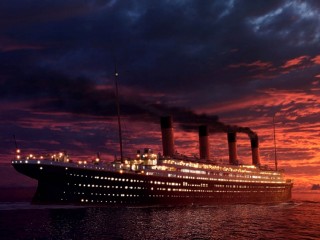 Because I’ll tell you this: I wouldn’t mind being able to look upon our works and be in awe rather than despair.

Telegraph the author at dix(at)tap-repeatedly.com!

11 Responses to One Hundred Years of Tragedy