Comedy is hard. And where it’s hard in television, and hard in movies, it’s especially hard to do in video games.

Duke Nukem Forever is an apt comparison to Retro City Rampage: a downloadable game released last year for PC, Playstation and PS Vita and this year for XBox 360 and WiiWare. Retro City Rampage also had a long, strange development cycle, spanning seven years. But instead of changing development teams and styles wildly, RCR was developed mostly by a single person, Brian Provinciano, who got assistance with  music, QA, and additional artwork. 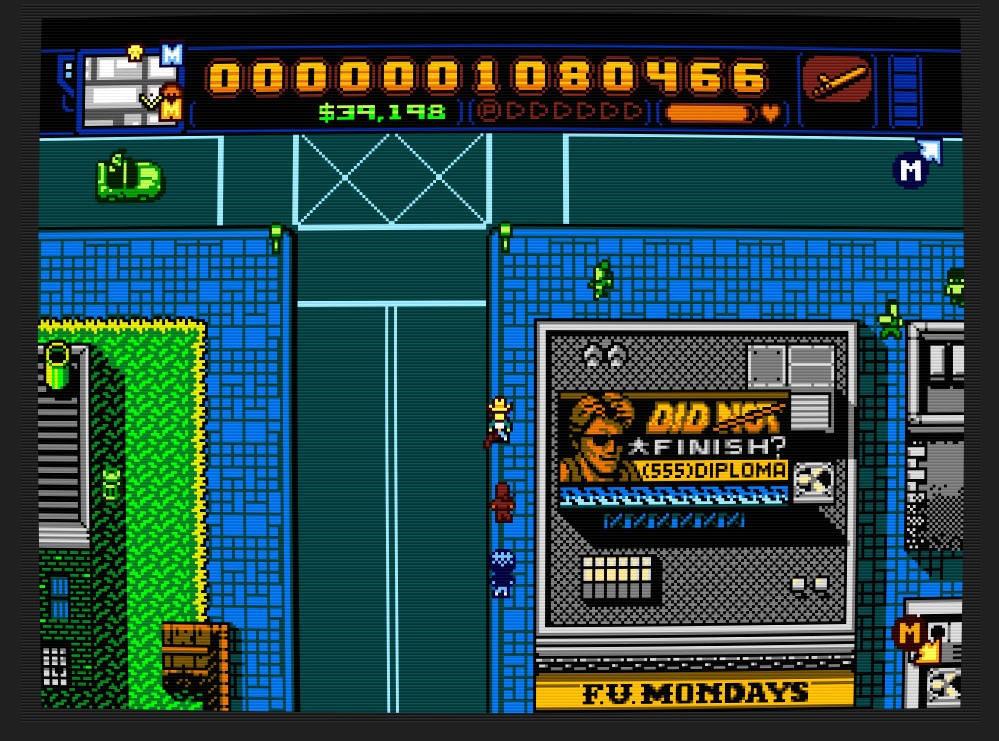 Developing a large title on so many different platforms, as a single developer, is no small feat. But that feat alone doesn’t save Retro City Rampage, which, like Duke Nukem Forever, is really a bit of a mess. It feels cruel for me to say, because I realize I am complaining about the work of one person, but I had real anger for Retro City Rampage. It felt like Retro City Rampage loved indie games but hated modern AAA games; it loved retro games, and it hated me. I played it seven hours, and I think I stuck out those last three hours out of pure spite.

Look, it’s fine to reference other things in your thing. Cribbing from pop culture is a time-honored tradition. But if you’re going to reference other works in your own work, the thing you’re initially making has to also stand on its own. Otherwise, it’s just a chain of meaningless references with no connecting tissue.

Retro City Rampage is the Meet the Spartans of video games.

Within the first thirty minutes I lost count of the things it was parodying. Here, by “parody,” I mean, just do again, with slightly different graphics and music. It does this in such a rapid-fire way especially at first that it’s hard to keep track of what’s going on. Whenever it has no ideas, it cribs from somewhere else. But it never has any ideas. I threw Bill and Ted out of their phone booth time machine only to run into Doc Brown from Back to the Future, who here is called Doc White Chocolate for some reason, but is the same character including a time traveling DeLorean. His arch-rival is Dr. Robotnik, only, in a moment of true third-grade wit, he is called Dr. Buttnik (which is not even a joke, it’s just a thing that Sonic called Dr. Robotnik on the cartoon, which was a good cartoon that deserves better). There is a level that can’t decide if it’s Monkey Island or the Legend of Zelda. There’s the Ghostbusters. There’s a Saved by the Bell level, for some reason, because I guess that is funny even if it is not a video game. There’s a Smash TV level. There’s Retro City Rampage holding me down on the floor and punching me with mid-nineties pop culture until I cry and scream uncle, and I have to step away from it and get a shower before I come back and unleash my rage on it again.

When Retro City Rampage aped the start screen of Mega Man 2, it complained that this was an overused parody. This comes from the school of comedy where lampshading a problem is enough to fix a problem. The idea here is that if you acknowledge something is corny or bad, it gets a pass for being corny or bad. Believe it or not, acknowledging that something is bad, with a wink and a nudge, does not then automatically make it good again. For example, having a character in your game go “oh no, not another water level!” does not make the water level any less annoying at that moment in time. It also does not make it funny. 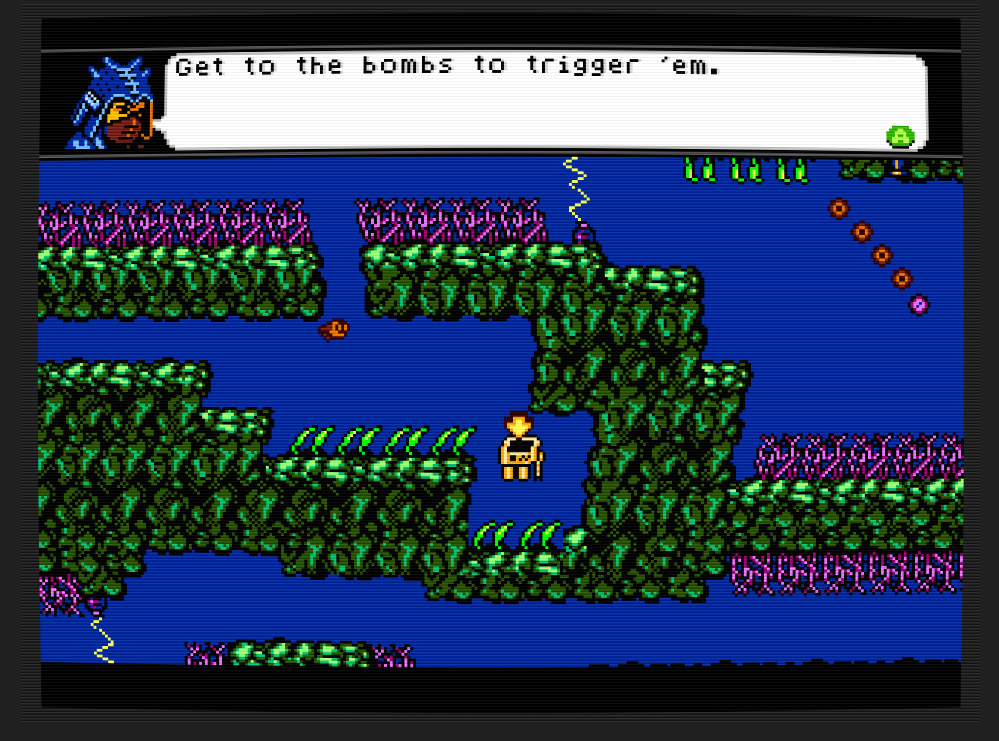 Remember when you did this thing, in a game, and how much it sucked? What if you had to do it… in this game?

Where Retro City Rampage loves references, it also loves cameos. Lots of indie game developers and game journalists make appearances in this game. When Phil Fish showed up, I was a little embarrassed for Retro City Rampage. But then the game unlocks Phil Fish as a player character and also makes a joke about how Phil Fish kinda sounds like Fresh Prince doesn’t it and I just got the mega douche chills for Retro City Rampage and wanted to crawl into a hole and die on its behalf. It’s all so weirdly in-jokey that I don’t know if it would mean anything to anyone who didn’t follow the scene. I guess if you’ve seen Indie Game: the Movie? I live in a game bubble, and I don’t what the average person knows about this kind of stuff or whether or not this would be funny to them. Destructoid refers to all this nonsense as “hilarious cleverness” so maybe they are glad they appeared in the game.

If you think it sounds like I have a chip on my shoulder here, then you haven’t seen the size of the chip on Retro City Rampage‘s shoulder. A bizzare second-act twist in the shaggy dog story that is this game’s plot takes Player to the building of the evil Game Publisher. The Game Publishers all make speeches about how they exploit indies for their work and keep all the profits. Then you play a bonus level that’s basically an 8-bit ‘Splosion Man, except the ‘Splosion Man analogue is a game publisher… who is so sweaty that he sweats everywhere and his sweat is explosive and he charges his powers up by sucking the souls of little indie developers, and also he is bald and his wife is ugly.

Seriously, all of that. 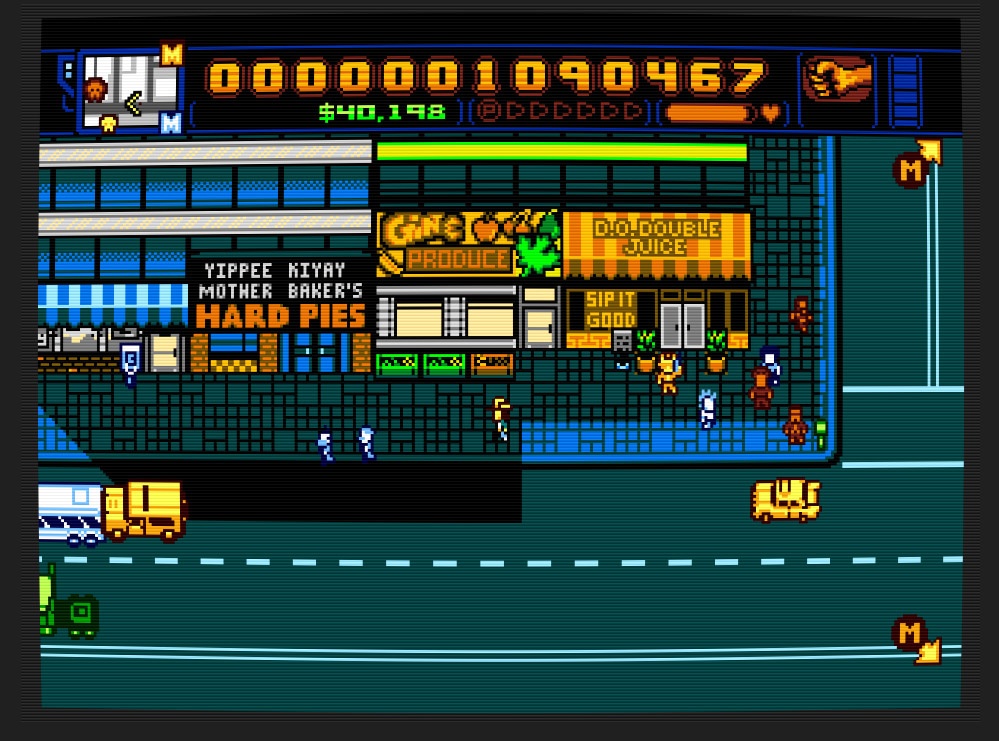 But aside from all that, how does it play? When the game isn’t changing mechanics to specifically parody another game, it’s a top-down open world game. It uses twin-stick shooter mechanics if you happen to have a controller (and I’d say, if you don’t, you’re outta luck in the later levels, where precision becomes increasingly mandatory). It also has one-button car-theft which is of course a parody/clone from the Grand Theft Auto series. It’s kind enough at least to add an “automatic” driving mode for people who don’t want to mess around with tank controls though the old fashioned “manual” scheme is still available.

There is a cover mechanic in the combat. I have no idea why. I suppose it’s just a way of being modern-cum-retro, but people who like retro mechanics generally don’t like cover mechanics. In this particular instance I found it fairly useless. The player character is so small on screen that the difference between the graphic for “in cover” and “out of cover” for myself and my foes is about four pixels.

A better method to keep safe is to jump over incoming enemies and projectiles. Some enemies can also be stomped on. This is a jump-and-stop mechanic in a top-down game and that’s about as wonderful as one might expect. It’s also not visually clear which enemies are un-stomp-able until attempting a stomp and being punished for it.

Feedback in general is a bit unclear, which is a part of retro I’d personally like to leave in the past. For example, when my little player (his name is Player) is on fire in Retro City Rampage, I need to run into a stream of water to put it out. But this knocks Player down, showing a “knockdown” animation that stuns me for a second and lets bad guys gang up on me. Therefore in spite of the game’s insistence that this was what I needed to be doing, it always felt like I was somehow doing it wrong. It also took me half the game to figure out why, when I aggroed a bad guy, a little “lock” icon appeared over his head. It’s actually a balloon with an exclamation point in it. It just looks like a lock. 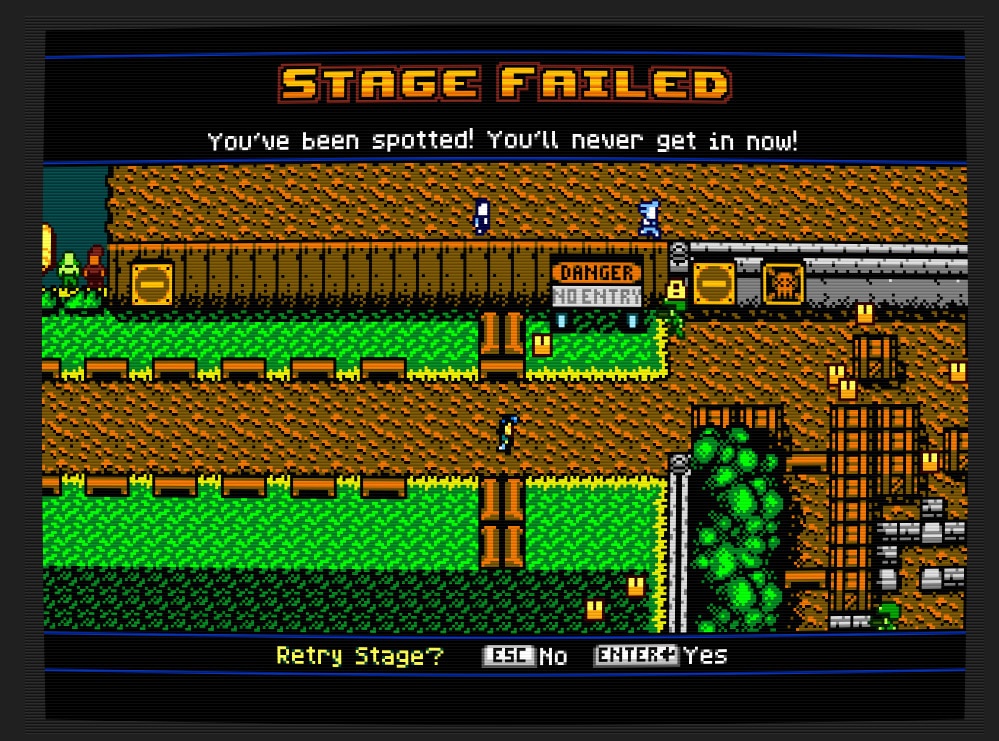 The pixel graphics are at least charming. They’re cute particularly in cinematics, where they’re large enough to be expressive with the limited color palette. Not shown in my screenshots is the full-screen view of the game that puts an old-fashioned television around the game experience, complete with worn-out stickers. It makes a very lovely first impression.

I also am fond of the soundtrack. The chiptunes all feel familiar-but-different (except for the Mega Man 2 one which is a bit on-the-nose), catchy without being overwhelming earworms. A full star of this review is for music, and I encourage you to click on the Bandcamp link and get the best part of this game pumped into your ears.

The game also has a lot of little challenge levels, and when it’s just doing its own thing and is as far away from its story as possible, I’d say it’s all right. Like in the GTA games that obviously inspired it, just wandering around causing mayhem can be a fun experience. It’s ultimately kind of shallow, though, so the game has various score challenges that mix up the formula slightly, and achievements to encourage exploration.

If the concept here seems like it might be up your alley in spite of my warnings, check out 2009’s Retro Game Challenge. It requires a DS to play, but seems to have a better understanding of the value of nostalgia. The game parodies are gentle and charming. More importantly, they stand on their own much better than those in Retro City Rampage and are fun little faux-retro games in their own right. Heck, all the characters in Divekick are parodies, and I just went nuts over it, but parody just is not enough by itself. Nostalgia or no, a game should be able to stand on its own merits as a fun experience and RCR did not fit that bill for me.