Video Game Addiction and You

Discussing video game addiction is never a particularly easy subject to broach. At least not in my experience. Ordinarily it’s not something I particularly like to talk about at all. That could be because I’m a gaming addict in denial, or because I’m ultra defensive over my chosen hobby and quickly angered by the stupidity and banal waffle that usually follows such discussion in the mainstream media. The problem for me is that I am a gamer, known and labelled as such, and so I have to be exposed to the subject of games addiction whenever it rears its head in the media. Being “The Gamer” of both my family and friends group – not just the one who likes Angry Birds but the one with a custom built PC who talks to other dweebs online – I find that whenever there’s a story about gaming addiction in the news, that story soon finds its way into my inbox.

Although a couple of days later than the article was originally published, that same such event occurred today. An email from a non-gaming work buddy pointed me in the direction of this article from The Guardian regarding Mr. Ryan Van Cleave, resident of both the United States of America and of Azeroth.

For the benefit of our readers from the US and other exotic locations, The Guardian is actually a pretty decent newspaper, in so much as that it’s the only newspaper I’ll actively read. It’s certainly a huge leap up from The Sun or the other gutter tabloids. Shock horror, the article isn’t even a cheap excuse to bash the gaming industry. There’s a slightly snide and critical tone to some of the language that’s sure to get certain mouths frothing with the words “BAN THIS FILTH NOW!” or whatever, but generally this is a pretty sensible and down to earth recollection of a man’s struggle with a very real problem. It’s at the very least worth a read if you have a spare five minutes. Either way, you’ve no doubt heard much of this before. “Wife leaves husband for playing too much World of Warcraft.” “Couple sell child to play World of Warcraft.” “Man dies due to playing too much World of Warcraft.” “Dog eats washing machine then farts rainbows that smell like cat biscuits due to World of Warcraft.” Dat WoW, eh?

My standard and potentially ignorant and/or wrong response to this sort of thing is “everything is fine in moderation.” I’m not going to keel over and die in my chair if I play an hour of Football Manager anymore than I’m not going to end up in A&E requiring a stomach pump if I drink a beer. And I’m not going to call for alcohol to be banned every time some other goon does. The vast, vast majority of gamers are of course capable of enjoying their favourite past time without developing deep vein thrombosis, and that includes everybody from the hardcore WoW players to the apparent non-gamers who still play Cut The Rope/FIFA/Madden/Call of Duty. It’s all in the moderation.

That’s not to discredit Van Cleave’s addiction and it’s not to blindly ignore what is obviously a genuine issue. It’s just what I believe to be the root truth of this problem and other’s like it. The piece did however prompt me to consider not only my own gaming time, but how that time aligned with other readers and contributors to Tap Repeatedly. You know, as mega dweebs who read online blogs and shit. 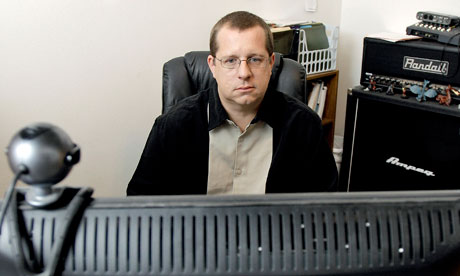 Ryan Van Cleave, pictured looking sad in front of a PC just to make ABSOLUTELY SURE you get the idea..

There’s a reason I name dropped Football Manager above, and that reason is because as anyone on my Steam friends list will know, I play a lot of Football Manager. Steam tells me I’ve played it for 368 hours, but Steam is prone to undercutting its time keeping and that figure doesn’t include the several weeks after the game was released before I redeemed my retail copy. Oh, and that’s just this year’s version, so that figure is only since November 2010. And I’ve been playing football management sims since some time in the mid-1990s. Oh heck. In my defence, I generally treat Football Manager less as a game and more as a vital part of my boot up routine. Often I’ll load up the game but leave it idle, sometimes for hours at a time, while I browse forums, listen to music or are otherwise away from the computer entirely. Nevertheless, that’s a lot of game time. To some, that would undoubtedly signal the onset of an addiction.

Despite this, I wouldn’t consider myself to be the victim of addiction. I’m happily married, maintain an active social life and never find my work disrupted by gaming (although sometimes I wish it was), but there’s an even more simple reason for my doubts. My forever dwindling attention span dictates that in only a few rare circumstances will I sit and play a single game in a single session for any longer than an hour, or maybe an hour and a half at most. Don’t get me wrong, I play a lot of games and generally play daily if I can squeeze the time, but I wouldn’t suggest an hour and a half’s gaming to be the sign of an addiction. Who knows, maybe I’m displaying those signs of denial again. I’m no psychologist, but even as someone who classes themselves as a “core” gamer (for lack of a less ridiculous description), and as someone who is friends with lots of other “core” gamers both on and offline, behaviour like that of Van Cleave’s just doesn’t fit in line with the activities of either myself or anyone I know.

Gaming culture, though. That’s something else, and it’s something I’m openly prepared to admit I may have a little more of an issue with. I absolutely love the video game industry and the idea of gaming. I spend a fair amount of time reading internet forums, laughing at memes, keeping up with blogs and have recently even re-visited the world of the printed magazine thanks to EDGE and their irresistible layout and production quality. I regularly find myself reading about games I have no intention of buying, getting hyped for games I know will be crap and generally digesting as much useless information as I can. It’s not unfair to suggest in the slightest that I spend more time, perhaps significantly more time, engrossing myself in the world of video games and gaming culture more than actually playing games themselves. It’s not something I necessarily consider a problem, but if I were to combine the time I spend reading about games with the time I spend playing them, I would almost certainly find that this industry consumes a huge amount of my spare time. Perhaps not too far away from the amount of time Van Cleave’s invested into World of Warcraft, and perhaps considered a genuine addiction to many.

I’m kind of rambling and edging further into self justification territory at this point, so I’ll draw this to a close. Those are my thoughts on a sometimes sticky and awkward subject and this is my post. My stance on video game addiction and how it potentially effects or doesn’t effect me. In a totally non-judgemental way and without fear of being ridiculed as a SUPER NERD or l33T G33K, it would be great to hear the thoughts of anyone who has also considered how their own gaming time is spent. As always, comments welcomed below.

8 Responses to Video Game Addiction and You